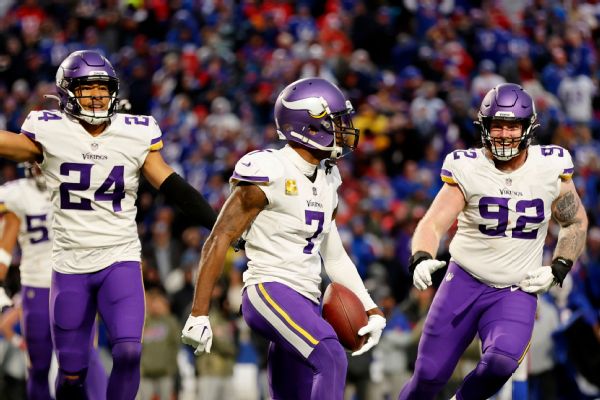 ORCHARD PARK, NY — Count out the Minnesota Vikings all you want. Patrick Peterson, Justin Jefferson & Co. keep finding ways to rally for victories in the most remarkable and improbable of ways.

Sunday’s 33-30 overtime win over the previously AFC-leading Buffalo Bills might have been the most stunning so far.

Peterson intercepted Josh Allen with 1:12 left in overtime to finally end a sloppy, yet thrilling back-and-forth game between two of the NFL’s best teams in which Minnesota rallied from a 17-point second-half deficit.

“Look at us now. Look at us now. That’s all I could say,” Peterson said, referring to critics who pointed out the NFC North-leading Vikings’ easy schedule.

“We’re not trying to prove them wrong. We just want to continue to prove ourselves right each and every time we step on the field,” added Peterson, who had two interceptions.

The Vikings took advantage of three turnovers by Allen in the fourth quarter and overtime, pulling ahead late in regulation with a touchdown when he mishandled a snap and fumbled in the end zone.

Greg Joseph put the Vikings ahead to stay by hitting a 33-yard field goal with 3:42 left in overtime. The game didn’t end until Allen, facing second-and-10 at Minnesota’s 20, forced a pass over the middle intended for Gabe Davis, only to have Peterson intercept it a few yards into the end zone. Peterson ran out and slid to the turf.

The Vikings also got a heroic performance from Jefferson — who had 10 catches for 193 yards and an incredible, game-saving one-handed grab — and overcame an officiating gaffe.

NFL senior vice president of officiating Walt Anderson said the Bills’ hurry-up offense gave replay officials no time to review Davis’ 20-yard catch on Buffalo’s final drive of regulation, which ended with Tyler Bass tying the game on a 29-yard field goal with 2 seconds left. Replays revealed Davis didn’t maintain control and the ball touched the ground on the sideline on what was ruled a catch at the Vikings’ 40 with 17 seconds remaining, Anderson said.

With its only loss to the undefeated Philadelphia Eagles, Minnesota matched its best record through nine games since 2009 and extended its win streak to seven games — the Vikings’ best since an eight-game run in 2017.

Minnesota rallied to win when trailing with 2½ minutes or less remaining in regulation for the fifth time this season.

The Bills (6-3) have lost two straight and no longer lead the conference — or even their division. They now trail the Miami Dolphins by half a game in the AFC East.

Allen’s first interception on fourth-and-goal from Minnesota’s 2 led directly to CJ Ham scoring on a 3-yard run to cut Buffalo’s lead to 27-23 with 4:34 remaining in regulation.

Buffalo’s defense then appeared to have the game won by stopping Vikings quarterback Kirk Cousins ​​for no gain on fourth-and-goal from half a yard out with 49 seconds remaining. On the very next play, Allen muffed the snap from center Mitch Morse, and Minnesota linebacker Eric Kendricks dived into the end zone to recover it for a touchdown.

Allen’s third and final turnover came on Peterson’s pick in overtime with Buffalo in position for a tying field goal.

“I’m going to remember this one forever,” Vikings first-year coach Kevin O’Connell said. “We just had to continue to trade those blows, body blows, haymakers, and just try to be ready for the next snap , as long as they let us continue to play today.”

Cousins ​​threw for 357 yards, and Jefferson had a massive outing.

Jefferson tallied a 22-yard touchdown catch on the Vikings’ first possession. But the most amazing of his many highlights was a 32-yard grab on fourth-and-18 on Minnesota’s final drive of regulation. Jefferson reached back to get one hand on the ball and rip it out of the grasp of Bill’s defender Cam Lewis.

“It felt like it was unreal. Like a movie,” Jefferson said. “The big games, the big moments, when people are looking for you to make a play, that’s what I like the most.”

Selected with the 2020 first-round pick the Vikings acquired in a trade that sent wide receiver Stefon Diggs to the Bills, Jefferson became the NFL’s first player to top 100 yards receiving 20 times in his first three seasons, breaking a tie with Odell Beckham Jr . and former Minnesota great Randy Moss.

Dalvin Cook sparked the Vikings’ comeback by scoring on an 81-yard run to cut Buffalo’s lead to 27-17 with 1:34 left in the third quarter. Cook finished with 119 yards rushing on 14 carries.

The Associated Press contributed to this report.