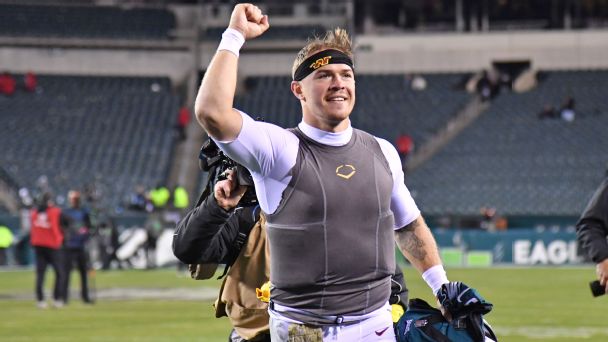 PHILADELPHIA — The gold chains draped around Minnesota Vikings quarterback Kirk Cousins’ neck while on a victorious plane ride has started a trend. And, yes, quarterback Taylor Heinicke and Cousins’ former team likes that, too.

After the Washington Commanders’ 32-21 upset of the Philadelphia Eagles, Heinicke was videoed on the plane wearing silver and gold chains around his neck, handed over by teammates, including safety Darrick Forrest, whose nickname — DFOE — is adorned on one chain. The back of one chain read “Silk.”

A teammate slipped stylish glasses with light-brown temples on Heinicke’s face as teammates surrounded him. In another video, Heinicke posed with one of his most ardent supporters, defensive end Chase Young. With the chains around his neck, Heinicke clutched two Busch Light beers.

It mimicked the scene with Cousins ​​wearing teammate Christian Darrisaw’s chains on the plane ride home following a win over the New Orleans Saints in London. Cousins ​​elevated the bit after a win at his former team, Washington, by wearing multiple chains and dancing shirtless, earning the nickname “Kirko Chainz.”

Heinicke did not dance, nor did he remove his shirt. But he did celebrate with teammates. It was quite a night for Heinicke and Washington, which handed the previously 8-0 Eagles their first loss while evening their record at 5-5.

“I would probably say it’s the biggest win of my career,” Heinicke said.

The celebration continued Tuesday when he stuck to tradition. Because he receives a $125,000 bonus when he plays 60% of the snaps and the team wins, Heinicke rewards himself by buying a pair of Air Jordans featuring the colors of the team they beat. He posted on Instagram a picture of his new white 4 Metallics with a hint of the Eagles’ green.

Heinicke completed 17 of 29 passes for 211 yards in guiding Washington to its third win in four games with him starting. Carson Wentz is eligible to return off injured reserve this week after fracturing his right ring finger in an Oct. 13 wins against the Chicago Bears. It’s uncertain if Washington will activate him and coach Ron Rivera has not said which quarterback would start if Wentz is available.

But those were issues for another time. Early Tuesday morning, it was about chains, planes and Air Jordans.

“It’s a division opponent undefeated in their place on Monday night,” Heinicke said. “Can’t get much better than that.”