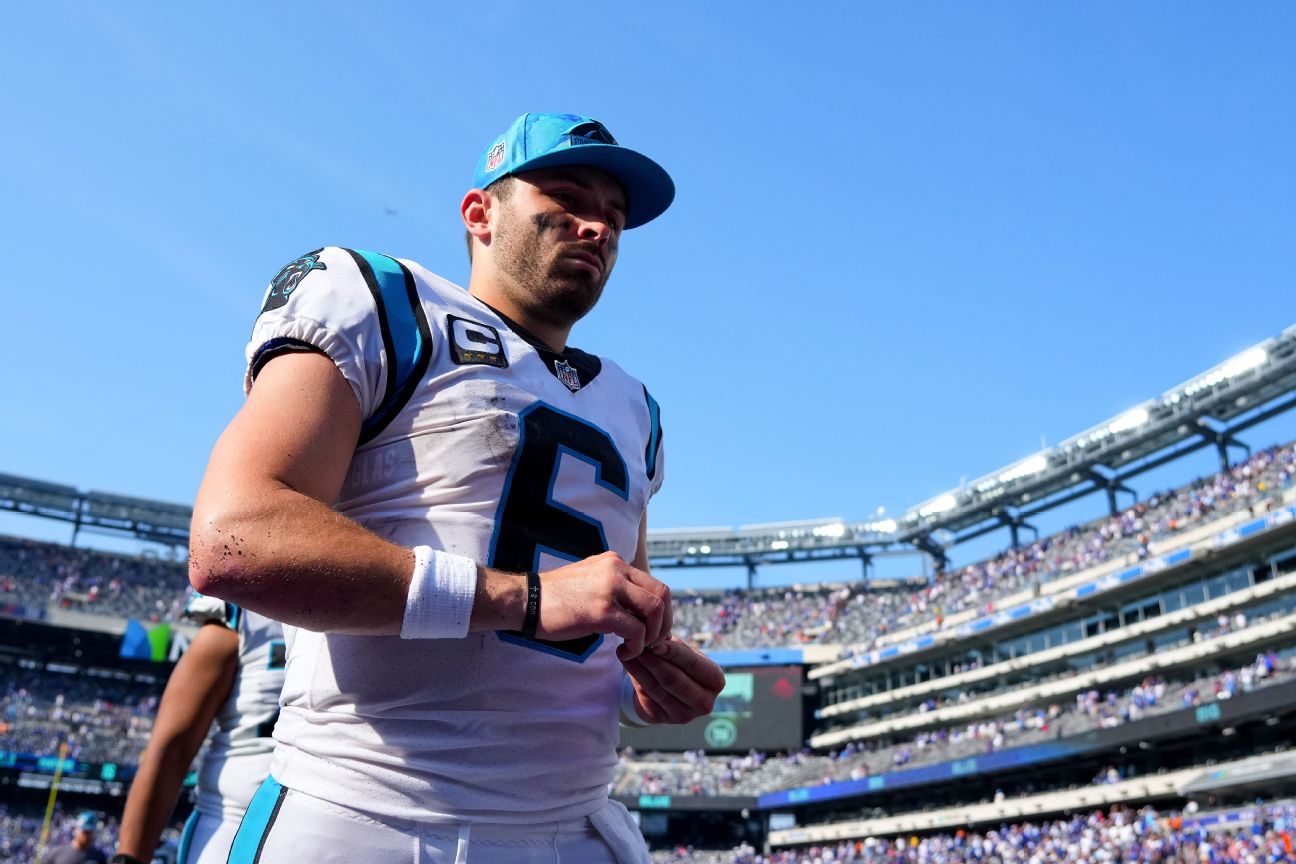 CHARLOTTE, NC — Quarterback Baker Mayfield will return to the starting lineup for the Carolina Panthers on Sunday after an MRI taken over the weekend revealed that PJ Walker suffered a high ankle sprain in Thursday night’s victory over the Atlanta Falcons.

Sam Darnold, who lost the open competition to Mayfield for the starting job during training camp, will be the backup for the Week 11 game against the Baltimore Ravens.

This will be Mayfield’s first start since he suffered an ankle sprain in a Week 5 loss to the San Francisco 49ers. He was replaced by Walker the following week against the Los Angeles Rams and had remained the backup the past four games despite being healthy enough to play.

Mayfield’s only playing time last month came in the second half of a 35-17 blowout loss at the Cincinnati Bengals in Week 7 in which he led three scoring drives, going 14-for-20 passing for 155 yards and two touchdowns.

Mayfield struggled to a 15.3 Total QBR during a 1-4 start that was the lowest in the NFL this season and the worst since ESPN began using the statistic in 2006. He had four interceptions and four touchdown passes during that stretch.

Interim coach Steve Wilks said the No. 1 thing Mayfield has to do against the Ravens is “protect the football.”

Having a solid running game led by D’Onta Foreman should take some pressure off Mayfield, who was the top overall pick of the 2018 NFL draft. The Panthers rushed for a season-high 232 yards against Atlanta and have averaged 159.5 yards rushing the past four games since trading star back Christian McCaffrey to the San Francisco 49ers. They averaged 89.9 yards rushing the first five games with Mayfield starting.

With Darnold returning last week from injured reserve and Walker playing well, the Panthers had been looking at all options at quarterback, including a possible release of Mayfield, according to a league source.

Walker was 2-3 as the starter, including Thursday night’s 25-15 victory over the Falcons that kept Carolina (3-7) a factor in the NFC South, which is led by the Tampa Bay Buccaneers (5-5). He suffered the injury in the fourth quarter, but it was never reported because, as Wilks said, Walker “sucked it up and played through it.”

Wilks put no timetable on the injury, saying only that Walker would not go on injured reserve.

“A high ankle sprain limits his mobility … so we’ll let him sit this week and go with Baker,” Wilks said.

Walker is the third Panthers quarterback since August to suffer a high ankle sprain at Bank of America Stadium, which went from a grass field to turf last year. Darnold started the season on injured reserve after suffering a high ankle sprain in the final preseason game, and Mayfield suffered a similar injury in Week 5.

Walker could not say whether his injury was a result of the turf.

“It’s tough on the bodies, especially for those big guys, receivers as well, coming out of breaks,” Walker said Monday. “It’s tough. Do I think the league should go to more grass fields? Absolutely. It helps the body more. It’s just more healthy on the body, the joints, the bones and all those things, especially if you play for a long time in this league.”

“To see that happened within eight weeks … is pretty unique,” he said of the injuries Carolina players have had.

Mayfield has plenty of experience facing the Ravens after spending his first four NFL seasons with the Cleveland Browns in the AFC North before being traded to Carolina in July.

In his eight starts against Baltimore, the Browns went 3-5 as he posted an 83.2 passer rating while throwing 13 touchdown passes and nine interceptions.