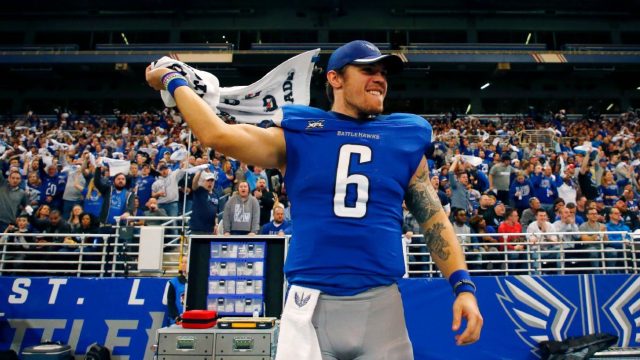 Previous iterations of the XFL were eerily reminiscent of the chorus of a George Strait song — “I’m here for a good time, I ain’t here for a long time.”

But now, under a new and prominent ownership group (some guy named Dwayne “The Rock” Johnson is involved), the 2023 XFL promises to be different than its predecessors. As the fledgling league looks to achieve staying power behind the play of AJ McCarron and Ben DiNucci, it’s only right we revisit those who got it going in the early aughts. For starters, the original 2001 XFL would have been nothing without the one and only, He Hate Me.

Whether it was a final foray into football after collegiate success or a stepping stone on the way to NFL glory, these players left their mark on the XFL:

The 2001 version of the XFL famously afforded players the opportunity to wear nicknames on the back of their jerseys. Smart opted for “He Hate Me,” and a star was born — along with a best-selling jersey. Smart finished the lone season of the original version of the XFL with 555 rushing yards, good for second in the league, and scored three touchdowns. He went on to become a special teamer for the Carolina Panthers, most notably serving as their kick and punt returner in Super Bowl XXXVIII.

Ivy’s time in the XFL was just one chapter in his lengthy professional football career, but he made it count. Ivy led the XFL in interceptions during its 2001 stint. The next season, he messed around and won a Super Bowl with the Tampa Bay Buccaneers, playing in all 16 regular-season games and making three postseason appearances.

Before Gleason played for the New Orleans Saints and became an advocate for people facing ALS, he also played in the first season of the XFL. His time with the Thunderbolts was far less notable than what he would achieve in the NFL. Following Hurricane Katrina in 2006, when the Saints returned to the Superdome for the first time in 21 months, Gleason blocked a punt to help beat the Atlanta Falcons. It has become one of the iconic moments in franchise history.

The Oklahoma Sooners’ standout quarterback (123 career TD passes) and Pittsburgh Steelers’ backup QB became the first player to sign with the short-lived XFL 2.0. The move reunited Landry with his college coach Bob Stoops. The stint almost didn’t happen, as the Steelers attempted to re-sign Jones after Ben Roethlisberger was injured, but the signing was blocked by the XFL. Landry had five TDs and 7 INTs in four starts before the XFL shut down. He has not, since, played in the NFL.

Temple’s all-time leader in QB wins became a breakout star for the league. Walker had 15 TDs and 5 INTs in five XFL starts. He won all five starts. Walker signed with the Panthers in 2020, and has started seven games in that time. In Week 7 of the 2022 season, he threw two TDs to beat the Bucs 21-3.

Johnson, who was selected in the fifth round of the 2008 NFL draft, is the epitome of an NFL journeyman. He has been on the active roster of 11 different NFL teams. But he thrived in the XFL. Johnson leads the league in passer rating while under center for the Wildcats in 2020.

Heinicke’s time in the XFL? Unremarkable. What has he achieved since? More so. The Green Lizard has started off-and-on for the Washington Commanders ever since replacing an injured Alex Smith in the 2021 NFC wild-card game. In that matchup, he went head-to-head with Tom Brady, throwing for 306 yards and a TD, and nearly pulling off the upset to the eventual Super Bowl champion Bucs. Since then, he has remained in Washington and shown some flashes of greatness. In four starts this season, he is 3-1 with five TDs, most recently handing the Philadelphia Eagles (8-1) a loss on “Monday Night Football.”

Reynolds ended his college career at Navy holding rushing records upon rushing records. Despite an attempted change in position, he couldn’t catch on in the NFL. In 2020, he signed with the XFL and became a star on special teams and as a wide receiver for the Dragons.

Jones was selected by the Commanders in the third round of the 2015 NFL draft. After a successful NFL career that included stints with the Indianapolis Colts and Eagles, he took his talents to the XFL. Jones was named to the midseason All-XFL team after rushing for 314 yards and a touchdown on 80 rushes, and having 25 receiving yards and a touchdown before the league was shut down.

When you think Cardale Jones, you likely think Ohio State. Jones’ XFL career wasn’t nearly as successful as his collegiate tenure with the Buckeyes. He got off to a strong start with the Defenders, winning his first two games as a starter. But then he went on a four-game stretch in which he threw 2 TDs to 7 INTs, and watched his yards per attempt fall each game. By the time the league folded, Tyree Jackson had replaced him as QB1.