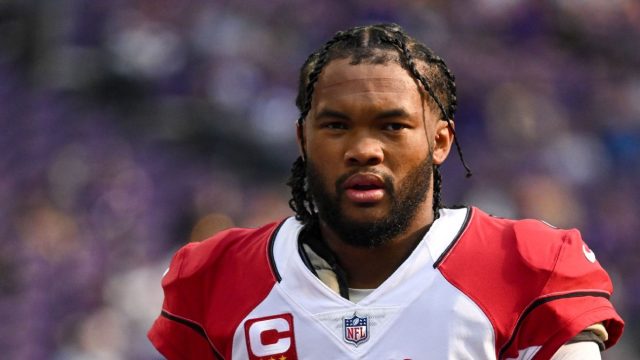 He revealed that he initially injured the hamstring on Oct. 30 against the Minnesota Vikings and then tweaked it on Nov. 6 against the Seattle Seahawks.

“Once it kind of happened the next week I kind of knew it was probably best for me to let it rest,” Murray said. “Once it happens, it’s unfortunate, but it happens. It’s a part of the game. We all go through it. You never want it to be yourself, but you try to get back as quickly as possible.”

Murray said he couldn’t put a percentage on his health but when asked if he’ll be able to play Monday, he said: “We’ll see.”

The key for Murray to play will be whether or not he can sprint. To find out, however, he just needs to try running, which comes with the inherent risk of reinjuring his hamstring.

“It’s just one of those things of trial and error,” Murray said. “[If] i feel good [have] strength, and range of motion, and then trusting in the training room with those guys and their beliefs. Then every athlete [must] listen to your body. How’s your body feeling? What’s it telling you?”

The Cardinals had a walk-through on Wednesday instead of a full practice, which could help Murray and backup quarterback Colt McCoy, who was injured in his start Sunday against the Los Angeles Rams.

McCoy had his left knee wrapped following the game after banging it against the turf and was seen with a wrap on his left hamstring during the game.

“Colt feels good,” Kingsbury said. “He’s still a little banged up with that knee but he was out there — both those guys were out there for the walk-through today.”

Whoever is that quarterback for Arizona may have a new option to throw to.

Wide receiver Marquise Brown’s 21-day practice window was activated on Monday. The Cardinals can bring up to the 53-man roster at any point during the next three weeks.

Kingsbury said there’s a chance Brown could be ready to play against the 49ers but will have a better idea of ​​that possibility on Thursday, when Arizona has a full practice.

“It felt good to get back on the practice field, move around, hear the plays, catch a few passes,” Brown said Wednesday. “It’s exciting.”

Brown, who leads the Cardinals with 485 receiving yards despite not playing since Week 6, said he doesn’t want to rush his return. He wants to make sure he gets reacclimated, makes sure his lungs feel good and that his left foot, which he broke, is ready this week.

While Brown is on the verge of returning, the Cardinals will officially be without tight end Zach Ertz the rest of the season, Kingsbury said.

Kingsbury declined to identify which specific injury Ertz has, just saying it was a knee injury, but added that Ertz will have surgery.

“Tough break there to lose a guy like that who does it right all the time,” Kingsbury said. “A great leader and great player, but I’m sure he’ll come back better than ever.”