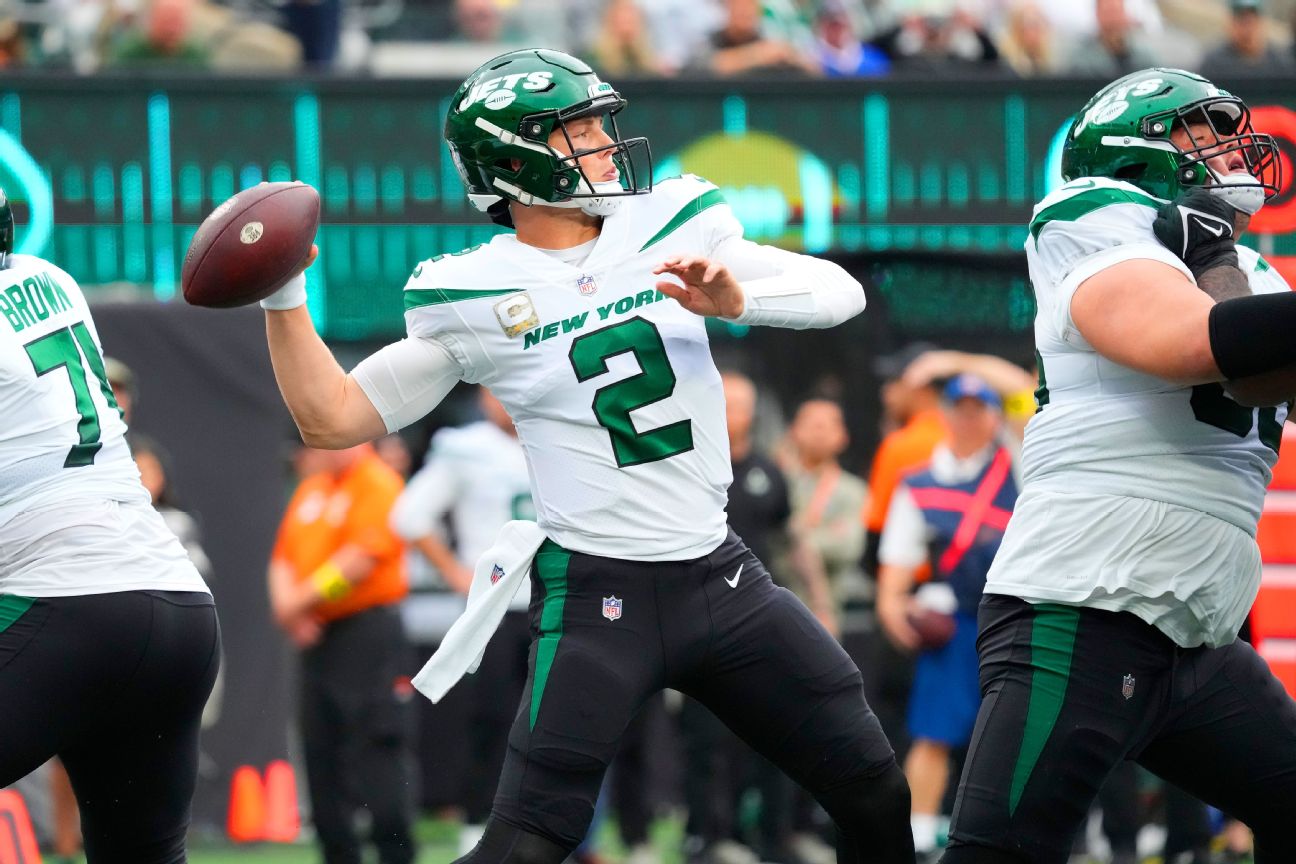 FLORHAM PARK, NJ — For the first time in his young career, New York Jets quarterback Zach Wilson was subjected to intense criticism following his three-interception game against the New England Patriots on Oct. 30.

Preparing for the rematch Sunday, Wilson, perhaps emboldened by a nice rebound performance, took a swipe at his critics.

Asked to recall his emotions from the previous New England game, Wilson said Thursday, “I thought they were good emotions. I mean, I was frustrated. I still believe that nobody outside of this building knows what they’re talking about.”

Wilson threw for a career-high 355 yards and two touchdowns in that game, but that was overshadowed by the turnovers that undermined the Jets in their 22-17 loss.

The former No. 2 overall pick quieted much of the noise with his best game of the year in the Nov. 6 upset of the Buffalo Bills, but Wilson’s coach still seems chafed by the fallout from the New England game. Robert Saleh said people are “holding him hostage” for a few bad plays.

“From a narrative standpoint, to try to attack a young man for four or five plays that are four or five teachable moments, in my mind, I think we’re missing the big picture on it,” Saleh said. “That’s all.”

The stakes are huge as the AFC East rivals meet again. The Jets (6-3) would move into first place with a win over the Patriots (5-4) at Gillette Stadium.

Wilson has yet to solve the Patriots. In three starts, including an injury-shortened game, he has seven interceptions and only two touchdown passes. The Jets failed to score more than 17 points in any of those games, all losses.

“I don’t necessarily feel like I have to prove anything, like, ‘Last game didn’t go great and I have to do something different this time,'” Wilson said.

Wilson said he learned a lot from the previous meeting. Such as: “When I throw the ball away, I’ve got to throw the ball away” — a reference to a careless interception in which he threw it to safety Devin McCourty while attempting to sail it out of bounds.

Another interception by McCourty came when Wilson forced the ball downfield into coverage, trying to make something out of nothing.

“Even in a moment of feeling like you want to make a play and have something happen, you can’t just throw a ball up like I did,” Wilson said.

To his credit, he rebounded with a clean game against the Bills — 18-for-25, 154 yards, 1 touchdown and no interceptions. It was the Jets’ biggest win in seven years.

Wilson is 5-1 since returning from a preseason knee injury and, even though he hasn’t posted gaudy passing numbers, he has avoided interceptions in four of his six starts.

“This kid is very, very resilient,” offensive coordinator Mike LaFleur said. “He cares about winning football games, he cares about getting as good as he can possibly be, he cares about his teammates. It’s cliché, but I swear by it, and that’s why I believe in this kid so much, because he is extremely resilient.”