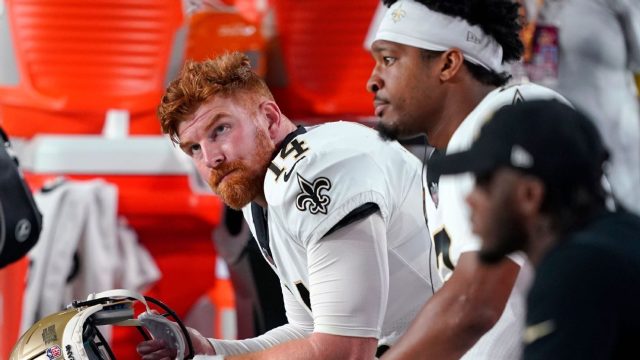 METAIRIE, La. — New Orleans Saints quarterback Jameis Winston said he didn’t think he would permanently lose his starting job to Andy Dalton after getting injured early in the season.

But the job is Dalton’s for at least another week after Saints coach Dennis Allen announced Wednesday that he wouldn’t be making a switch.

Dalton has been the starting quarterback since the Saints’ game against the Minnesota Vikings in London on Oct. 2. Allen hinted at the beginning of this week that he was considering a quarterback change because of offensive struggles for the past two games, but he ultimately decided against it.

Winston said he was under the impression that he would eventually return as the starter after a conversation with Allen in London. Allen said at the time that he was resting Winston to allow his back and foot injuries to heal, but he decided Dalton would be the starter a few weeks later, as long as the offense continued to perform well.

Winston, who injured his back in Week 1 against the Atlanta Falcons, admitted that he probably shouldn’t have played the following week against the Tampa Bay Buccaneers but wanted to be out there. The Bucs not only drafted him with the first pick in the 2015 NFL draft, but Winston was also playing against them when he tore an ACL last season.

Winston said that’s not the case now, as he feels he’s healthy enough to play. Allen said it was unlikely Winston would be 100% this season, but Winston said he’s been getting better since he’s not playing.

“I’m healing up. I haven’t been playing. This is the best healing I can get,” Winston said.

Winston said it has been a difficult season for him, but he’s trying to focus on being a leader from the sidelines.

He added: “I owe it to this team to be in the role that I’m right now, to this offense, to everyone. I apologize to the fans. I know some of them want to see me out there. But I think winning makes a lot of things better, so we need to go out there and start with this week, get a win as a team. No one person makes a team win. We need to get a team win and I think we’ll all be better at the end of the day.”

Winston is one on a long list of players who likely will not be playing against the Los Angeles Rams on Sunday. Saints veteran defensive end Cameron Jordan, who has never missed a game because of injury in his 12-year career (he missed his first game last year against the New York Jets because of the COVID-19 protocol), will sit this game with an eye injury.

Jordan said that he played most of last week’s game against the Pittsburgh Steelers with one of his eyes almost swollen shut.

“Maaaan unreal. Smh control what you can control,” he posted to his Twitter account on Thursday. Jordan did not practice all week after the game.