As Kubiak was making his way to talk to his team, a member of the PR staff handed him the stat sheet. An immediate shock rushed through his body as he read the numbers.

Kubiak is referring to Johnson, who on Friday celebrated the 10th anniversary of the historic day. Johnson’s 273 yards (on 14 catches) currently ranks 12th all-time for a single-game performance and No. 1 in the Texans’ history books. 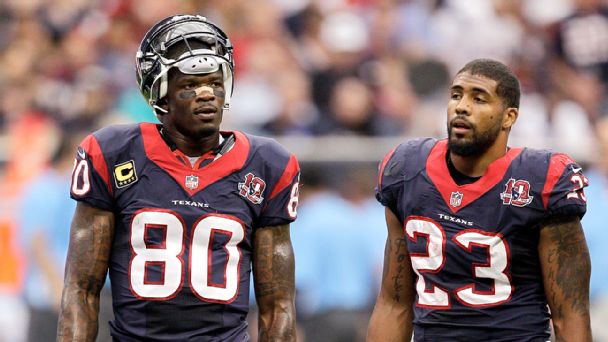 Quarterback Matt Schaub’s 527 passing yards have him tied for second all-time with former Houston Oilers quarterback Warren Moon. The mark ranks behind only Hall of Famer Norm Van Brocklin’s 554 yards for the Los Angeles Rams against the New York Yanks in 1951.

“I’m so caught up in trying to win the game,” Johnson told ESPN. “I’m not sitting here saying ‘Oh, I’m killing them today.’ Because if we don’t win, it doesn’t matter.”

Some receivers would have let the world know with their antics or even theatrics that they were having that kind of day, but not Johnson — an introverted personality who let his play do the talking.

“He just doesn’t change, that’s who Dre is,” Foster told ESPN. “When he was making big plays to [fighting with] Cortland Finnegan — he doesn’t change. So, you couldn’t tell the difference.”

However, when Johnson was riding home later that day, he started to reflect on what he’d done.

AT THE TIME, Johnson’s performance ranked ninth in NFL history. Now it’s 12th after Julio Jones, Calvin Johnson and Antonio Brown have surpassed him since.

But to this day, Johnson doesn’t boast about his performance. He barely even thinks about it unless he sees highlights.

Still, Week 11 in 2012 is the signature highlight in Johnson’s résumé, which also features seven Pro Bowls and four All-Pro selections along with 14,185 receiving yards (11th all-time) and 70 touchdowns.

Those accomplishments are why Johnson was a finalist for the Pro Football Hall of Fame class of 2022 and is one of the early nominees for the class of 2023.

Johnson was always a soft-spoken player, even dating back to his childhood in Miami.

“If you came to my mom’s house, the house was always very quiet,” Johnson said. “Wasn’t really a lot said, unless something needed to be said. So I always kind of had this reserved mentality.

“I never wanted to be the loud guy. I was always an observer. I never felt like I needed to do a lot of talking to stand out. I always just felt, if I go out here, do what I’m supposed to do, people would notice that.”

Foster recalled his rookie year in 2009 (Johnson’s seventh year in the NFL) when he approached Johnson in the weight room looking for guidance and advice. Timidly, Foster didn’t want Johnson to feel bothered.

So instead of asking for his number, the rookie asked for his email.

“I was like, ‘Dude ain’t going to want to give me his number,’ and I would have felt thirsty asking for his number,” Foster said while laughing. “I wasn’t trying to bother him. He was like a superstar so I was like ‘Yo let me get your email?’ He was like ‘All right.'”

The duo laughs about that email years later.

And once Foster became an All-Pro running back the pair developed an “Odd Couple” dynamic in which Foster, the energetic jokester, would playfully mess with Johnson.

BID EVEN WHEN Johnson was making game-altering plays, he wouldn’t really speak on it.

Even his historic day seemed like just a normal game day for Johnson and the 8-1 Texans, who were getting ready to face the 1-8 Jaguars.

It consisted of breakfast (scrambled eggs with cheese and half a bagel), a dive in the cold tub once he got to the stadium to give a “little shock” to his body, trips to the training room for treatment and the field for his catching routine, and then a return to the locker room to wait for pregame warm-ups.

Then it was game time, and Schaub immediately connected with Johnson for gains of 7, 22 and 45 yards.

“He was always going to get the first look because he’s never covered,” Schaub told ESPN. “There’s always a way to throw the football in a spot where he can manipulate his body in his catch radius, and he’s going to make you look good.”

Two plays later, Schaub threw a 9-yard touchdown pass to wideout Keshawn Martin as the Texans went up 7-0. It was Schaub’s first of five touchdowns.

Even though Johnson was immediately making plays, he didn’t think much of it.

“I caught those first three passes, but I didn’t have the feeling like ‘Oh, [I’m about] to go for 273 yards,'” Johnson said.

On paper, it was set up to be an easy win for the Texans, who were favored by 16 points. But the game was anything but that.

Jaguars quarterback Blaine Gabbert injured his elbow in the first quarter, and backup Chad Henne came in and threw for 354 yards and four touchdowns. Jaguars wide receiver Justin Blackmon finished with seven catches for 236 yards. It was the first time in NFL history that two receivers eclipsed 200 yards in the same game.

Down 34-20 with 12 minutes remaining, Schaub and Johnson spearheaded the comeback.

“We found ourselves in a dogfight and playing a little from behind,” Schaub said, “and so we had to go out make plays.”

The Texans had an opportunity to win in regulation, but kicker Shayne Graham missed a 47-yard field goal as time expired.

They responded with a field goal of their own, and the game became the first one in history to see a team score multiple times in overtime.

DOUBLE SLAMMER SCREEN was the call that concluded Johnson’s day.

The scoreboard read 37-37 with 2:10 remaining in overtime when the call was relayed to Schaub’s helmet from Kubiak, and the Texans were on the Jaguars’ 48-yard line facing second-and-5.

A tunnel screen was set to counter the Jags’ aggressive blitzing and get Johnson into space. Schaub delivered the ball, and Johnson had an entourage of linemen escorting him to the end zone.

“I was in disbelief because when I’m running with the ball,” Johnson said, “the only thing on the right is the sideline, and I actually look to the right like somebody was facing me from the sideline or something. I really couldn’t believe it. It was a perfect playcall.”

Johnson already had 11 yards receiving in overtime and capped his day with the 48-yard game winner. He refers to his dominating performance as one of the “greatest achievements” of his career.

But at the moment, the 2003 No. 3 overall pick out of Miami quietly caught pass after pass as if it was any other game.

“It just felt like, same game, just a different day because you never know how the game is going to play out,” Johnson said.

That day just happened to be a quiet one for the history books.