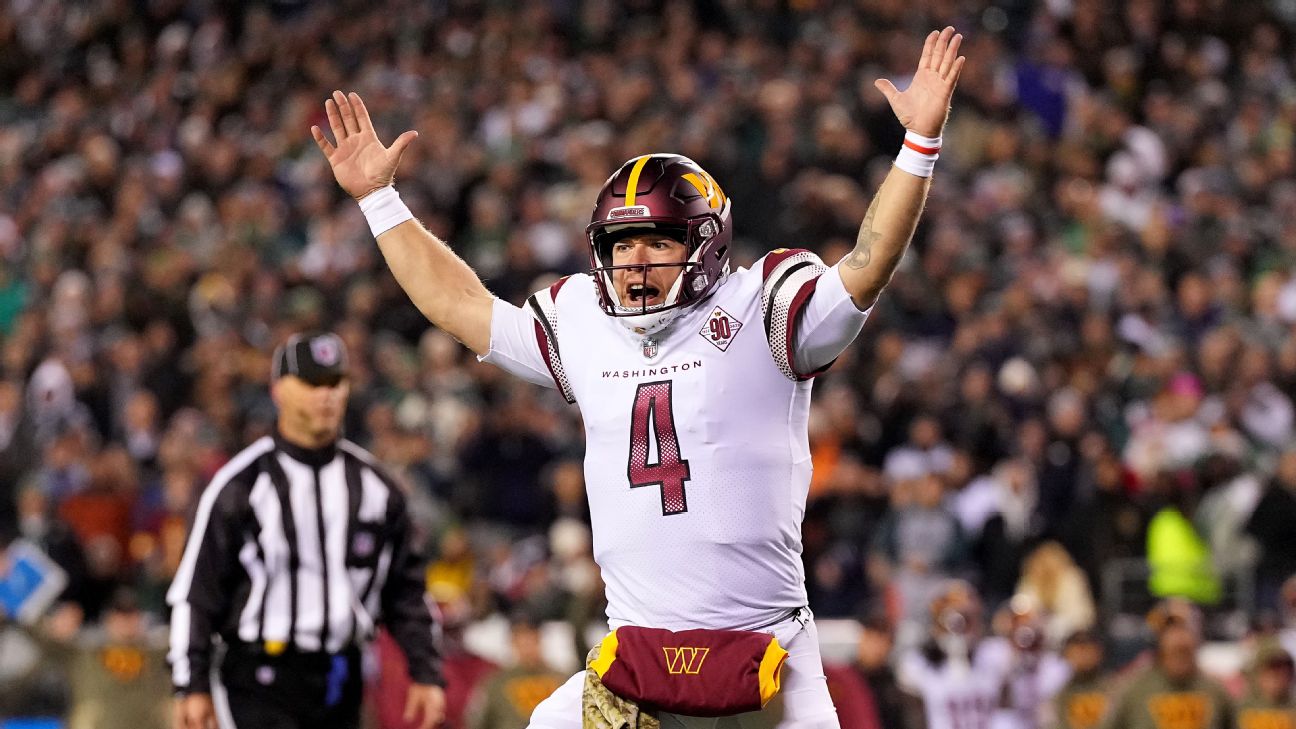 HOUSTON — The Washington Commanders will stick with Taylor Heinicke as their starting quarterback as long as he continues to play well and the team keeps winning, a source confirmed to ESPN.

Heinicke has helped Washington go 3-1 in place of the injured Carson Wentz and will make his fifth straight start Sunday when the Commanders (5-5) visit the Houston Texans (1-7-1).

Wentz remains on injured reserve because of a sprained right ring finger, which he suffered in an Oct. 13 wins at Chicago. He was eligible to come off IR this past week, but Washington did not feel he was ready.

The Commanders’ surge with Heinicke under center has left the organization with a decision to make, however, when Wentz is activated. Coach Ron Rivera said this past week that he did not want to reveal his intentions before talking to the players. A source told ESPN that Wentz has been informed of the decision to stick with Heinicke.

It’s also possible that Wentz returns to the starting lineup sooner rather than later — but only if Heinicke and the offense struggle and the Commanders start losing again.

The current scenario with Heinicke as the starter is what one source predicted would happen several weeks ago if the Commanders had responded well to Heinicke and were winning.

The decision to start Heinicke impacts the conditional pick for Indianapolis. If Wentz plays at least 70% of Washington’s snaps this season, the Commanders would owe the Colts a second-round pick. Wentz has currently played 59.1% of the team’s offensive plays. At Washington’s current pace, if Heinicke starts one more game after Sunday, the Colts would only get a third-round choice.

Wentz threw seven touchdown passes combined in Washington’s first two games, but the offense struggled in the ensuing four games, scoring a total of just 47 points in that stretch.

For the season, Wentz has thrown 10 touchdown passes and six interceptions while playing in a new offensive system for the first time in his seven seasons. He was sacked 23 times, a result of that learning curve, inconsistent pass protection and a loss in mobility due to knee and back injuries. Wentz has a 32.5 QBR.

Heinicke, who has spent parts of five seasons in this offense, has helped with his mobility as well as his penchant for connecting with top receiver Terry McLaurin. In six games with Wentz, McLaurin had 36 targets and 22 receptions; in four games with Heinicke, he has 37 targets and 24 catches.

Heinicke has thrown five touchdowns and four interceptions but has been sacked only nine times in five starts, and has a QBR of 46.6. He also has become a popular player in the locker room because of his underdog story — the former undrafted free agent out of Old Dominion who was sleeping on his sister’s couch two years ago — and his go-all-out style of play.

“You have to look at the momentum and what the mood of the team is,” Rivera said one day after Heinicke helped upset the previously undefeated Philadelphia Eagles. “There are a lot of factors.”

The NFL Network first reported the Commanders’ decision to stick with Heinicke.