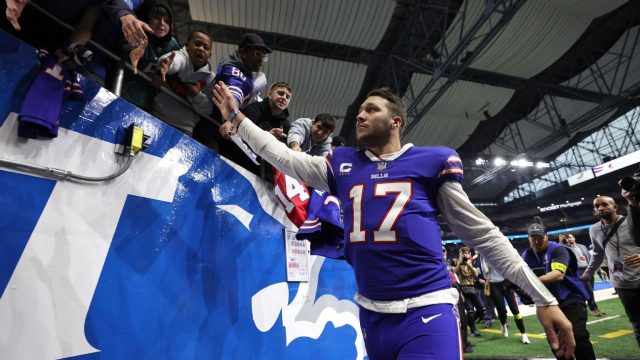 DETROIT — A little over 48 hours before the Buffalo Bills were supposed to be kicking off a football game in Detroit, coach Sean McDermott spoke to the media from his home with feet of snow piling up outside.

With practice canceled for that day, McDermott spoke about the uncertainties in the Bills’ travel schedule and the unknown conditions players, coaches and staff were facing due to the snow storm that went through Western New York.

Just after that news conference, McDermott and his wife, Jamie, received messages from neighbors and friends offering to help in any way they could.

“Our plow guy couldn’t make it, so our neighbor called in a front loader in order to take the snow out and then our normal plow guy did come once,” McDermott said. “It was pretty cool just talking about, not sure what’s going to happen, not sure if we’re gonna be able to get out, and get five, six text messages to my wife and myself of neighbors and friends saying, ‘Hey, whatever you need, we’ll be there to help you.’ That’s pretty special.”

Despite over 77 inches of snow falling in Orchard Park, New York, the Bills made it to Detroit and came away with a 31-23 win over the Cleveland Browns. But it took a monumental effort from the Bills staff and the greater Buffalo community to make it happen.

The game was moved to Detroit on Thursday evening so that resources in the area could be prioritized for other purposes, but for the team to get to the game, everyone had to make their way to the facility and then onto team buses to the airport. Much of the work came from the Bills staff. But McDermott wasn’t alone in receiving a hand from the community.

Players throughout the locker room postgame shared stories of how neighbors and fans came to shovel out driveways or shared their snowblowers, including quarterback Josh Allen, who had people with a big tractor come to dig him out. Tight end Dawson Knox said he looked out his window Saturday and about 10 neighbors were shoveling his long driveway. Wide receiver Gabe Davis then arrived to pick him up and tight end Tommy Sweeney.

“They just showed up without me asking or saying anything,” Knox said of his neighbors. “And I got a long driveway, too, so they were working hard.”

McDermott picked up linebacker Von Miller and punter Sam Martin on his way to the facility.

“I went out of my house to go to the facility and picked up Von and Sam, and down the road came the big plow,” McDermott said. “And I think he stopped, and we got out, we took a quick picture, and he did a great job clearing the road so we could get out of the development there.”

Linebacker Tremaine Edmunds, who was inactive for the game because of groin and heel injuries, got out of his house via tractor, per defensive tackle Jordan Phillips. Safety Jordan Poyer said he was out shoveling for about two hours with the whole neighborhood coming out to help. Teammates spoke about videos of linebacker Tyrel Dodson, with his bag over his head, and running back Devin Singletary making their way down snow-covered streets because their homes were not reachable by vehicle.

A variety of team staff members organized efforts and came to help players out of their homes. Ron Raccuia, the Bills’ executive vice president/chief operating officer, walked to left tackle Dion Dawkins’ house to make sure he got out OK, with Raccuia and VP of communications Derek Boyko unable to get their car close enough to his home.

“I was concerned until that last minute until I [saw] Ron and the guys’ faces at the street,” Dawkins said. “I said, ‘Well, there’s my ride. I’m on the way.'”

On top of the logistics of getting to the game, the team held only one normal day of practice because of the weather and a variety of illnesses throughout the week. Phillips still had the flu but played 27 defensive snaps. Wide receiver Isaiah McKenzie was out of practice on Thursday with a “real bad” stomach virus.

But all the efforts paid off. Despite a slow start, especially from the offense and Allen, the Bills broke away in the second half and limited Browns running back Nick Chubb to 19 rushing yards on 14 attempts, the fewest rushing yards he has had in his career with at least 10 rushing attempts.

The Bills’ running game also got going with running backs Singletary and James Cook each finishing with 86 rushing yards. Outside of the kneel that ended the game, the offense scored on seven straight possessions to close things out, with kicker Tyler Bass making all six of his field goal attempts. It was Bass’ second career game with six field goals made, tying four others for the most such games in NFL history.

The win snapped a two-game losing skid, but now a very short week begins, with many players unsure of what their paths home would look like upon their arrival back at the facility. Phillips said, “I have no idea,” when asked what he expects things to look like when they return.

“I mean, literally it’ll be the exact same thing [from when the team left],” Dawkins said.[Fans might help out again but] if they didn’t, we’re gonna be home shoveling and getting that ‘Shnow’ to our left and to our right.”

The Bills will then head back to Detroit on Wednesday to play the Lions on Thanksgiving. In preparation for the quick turnaround, while the graphics and songs remained the same as they would have been at Highmark Stadium in Orchard Park, the team used the visitors’ side of everything at Ford Field.

“I think what coaches and [general manager Brandon] Beane and the organization did as far as getting us here, getting us in the locker room that we’re gonna be in on Thursday, I think, on the same sideline, so we’re able to visualize and kind of see as we leave out here what it’s going to be like when we come back in a couple of days,” Poyer said. “So, like I said, we’ll learn from this, from this victory, and move on and come back ready to play on Thursday.”