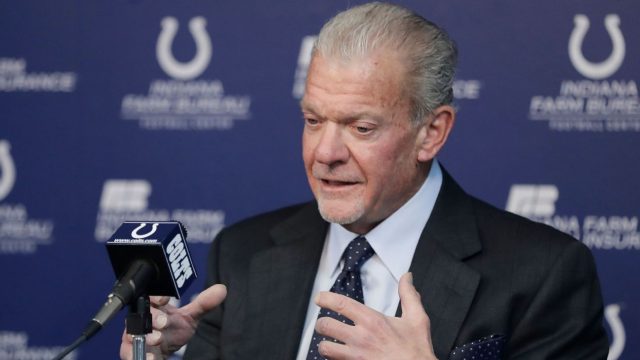 INDIANAPOLIS — Indianapolis Colts owner Jim Irsay pushed back on recent characterizations of his handling of the team’s coaching change and firing of coach Frank Reich, telling ESPN, “It’s not personal. It’s the very opposite from being personal.”

Irsay’s comments were prompted in part by statements made by Philadelphia Eagles coach Nick Sirianni, a former Colts assistant and Reich mentee, who offered passionate postgame comments after Sunday’s win over the Colts in Indianapolis and was captured on video after the 17-16 victory yelling into the Lucas Oil Stadium crowd, “That s— was for Frank Reich.”

In his postgame news conference, Sirianni added, “You don’t want to know what I think of if he should be here or not, but you guys can probably imagine what I really think.”

Irsay, who also has been bothered by some portrayals of his decision to hire Jeff Saturday as an interim coach, offered a strong defense of his decisions surrounding the coaching change.

“Frank is a treasured friend of my family and all my daughters,” Irsay said. “We go back a long, long way. I’m very, very close to Frank, and I’ve known Frank for many decades. He’s like family.”

Irsay said he demonstrated his commitment and belief in Reich by executing a contract extension with him in 2021. Irsay said he was reluctant to extend Reich when Reich broached the idea because the original contract had two years remaining and because Irsay had concerns about the team’s offensive consistency. But, Irsay said, he went against his past stance and made the decision to move forward with a new deal that locked Reich up through the 2026 season.

“I’ve been doing this for over 50 years, and I’ve never, ever, ever, ever given a coach an extension when there’s two years left on the contract,” Irsay said. “But [I did it] because of the closeness with him and our family, and because I hoped that maybe it would be something that would help strengthen him in his position and his own belief.”

Irsay drew a comparison to the Colts’ decision to move on from running back Edgerrin James after the 2005 season because of the team’s tightening salary-cap situation, saying that decision — like the one to fire Reich — was made with the right intentions .

“I had to tell Edgerrin James that there wasn’t gonna be a contract,” Irsay said. “And he still asked me to present him for the Hall of Fame because people understand. I just think that has to be clarified because I don’t know where anything personal gets in terms of the organization, as if we wronged someone. You have to make a decision that’s in the best interest, in your belief, of the franchise going forward. It’s not personal.”

The move to hire Saturday, who took over despite having never been a coach beyond the high school level, was heavily criticized in some corners. Irsay pushed back on that criticism, too, saying Saturday’s hire was a highly unique situation.

“You have to understand that Jeff’s a very unusual person who was in a very unusual position to have the type of qualities that would make him able to make a transition like this,” Irsay said. “Most of the time, it is gonna be pretty hard. Could I make a hire like this again? Probably not. I mean, if I was lucky enough to live long enough to do this for 75 years, it’s probably once in 75 years . I mean, it was a rare thing because the circumstances presented themselves that way.”

Irsay specifically disputed the idea that he hired Saturday, a former ESPN analyst and Colts consultant, merely because of their relationship or his status as a former Colts player.

“I mean, I wasn’t gonna pick up the phone and hire Dallas Clark or Dwight Freeney,” he said. “Well, they wouldn’t be ready.”

Asked whether the course of the team has changed under Saturday’s leadership — the Colts are 1-1 since his hire — Irsay had plenty to say.

“The trajectory has changed,” he said. “People can write their stories and everything else. But, look, we won a tough game on the road in Las Vegas, after [previously] really being unable to compete. And we come in and play a team that’s probably gonna be in the NFC championship game (the Eagles) with just a remarkable quarterback.

“People think that Jeff was gonna come in be a miracle worker. I mean, what kind of delusional trip were they on? They have their original narrative and anything that goes against that narrative, they don’t wanna write until they have to. And eventually they will. They’ll see the light. But all we can do is focus on Pittsburgh, and then when the offseason hits, we’ll do a serious and dedicated interview process, which I’m looking forward to.”