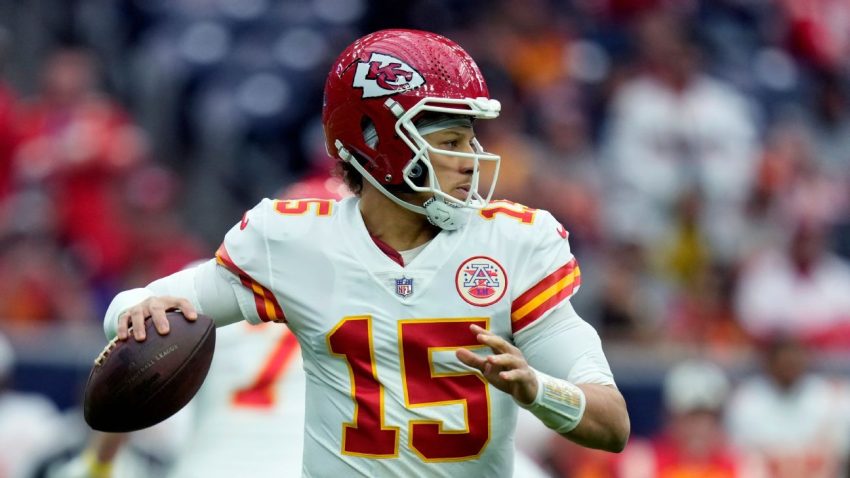 HOUSTON — Each year when the Kansas City Chiefs begin training camp, they set out their list of goals. Patrick Mahomes said it always starts with the same item — to win the AFC West.

The Chiefs (11-3) had to go to overtime Sunday against a one-win opponent, but they can cross that one off the list for the seventh straight season. Jerick McKinnon’s 26-yard touchdown run gave the Chiefs a 30-24 win over the Houston Texans and eliminated their last remaining rival for the division title, the Los Angeles Chargers.

“We accomplished our first goal,” said Mahomes, who threw for 336 yards and two touchdowns and ran for a score. “Our next goal is to try to establish home-field advantage. It’s not in our hands, but we can do our best to be ready in case we get that opportunity and then to win the Super Bowl.

“We have a lot to learn from this game, but we have to continue to get better as a team so, when going into the playoffs, we’re ready to go to try to make a run.”

AFC West championship hats and red T-shirts that read, “Conquered the West,” were passed out in the Chiefs’ locker room after the game. They have worn similar apparel for seven straight years now.

The seven consecutive division titles are tied with the Los Angeles Rams (1973-79) for the second-longest streak in NFL history. The New England Patriots won the AFC East title 11 straight seasons from 2009 to 2019.

Tight end Travis Kelce, defensive tackle Chris Jones and long-snapper James Winchester are the only Chiefs to play for all seven division-title teams. This was title No. 6 for Mahomes, but the Chiefs have plenty of players who are newer to the team and perhaps appreciated it even more, including McKinnon, who is in his second season in Kansas City.

“Some guys go the whole career and never win a division, never make the playoffs,” said McKinnon, who also scored on a 20-yard pass reception in the second quarter. “So when you have the opportunity to be in this moment, you’ve got to enjoy it. You’ve got to cherish it because everybody doesn’t get the opportunity.”

The Chiefs are chasing the Buffalo Bills (11-3) for the AFC’s No. 1 playoff seed. The top seed gets the conference’s only first-round bye and home-field advantage until the Super Bowl. The Chiefs haven’t played a road playoff game since Mahomes became their starting quarterback in 2018.

The Bills hold the tiebreaker over the Chiefs because of a 24-20 victory in Kansas City in Week 6.

“Some guys go the whole career and never win a division, never make the playoffs. So when you have the opportunity to be in this moment, you’ve got to enjoy it. You’ve got to cherish it because everybody doesn’t get the opportunity.”

“The team recognizes that we’ve just given ourselves an opportunity and the most important football is in front of us,” Chiefs chairman Clark Hunt said. “We’ve got some important regular-season games over the next three weeks and then the opportunity in the playoffs to hopefully get back to the Super Bowl.

“Every one of [the division titles is] special, and you certainly enjoy clinching this early. But there’s a lot of football ahead of us.”

The other three AFC West teams loaded up during the offseason in an effort to take down the Chiefs. The Denver Broncos traded for quarterback Russell Wilson, and the Las Vegas Raiders added wide receiver Davante Adams. All three teams acquired a premier pass rusher. But the Chiefs, who are 4-0 in divisional games, clinched with three weeks to play.

“We believe it’s always a tough division, and obviously with the players they got in the offseason, it was even tougher,” Mahomes said. “We still won the AFC West, and you have to enjoy that. I told the guys to do that and enjoy it for, like, the plane ride at home and tonight.