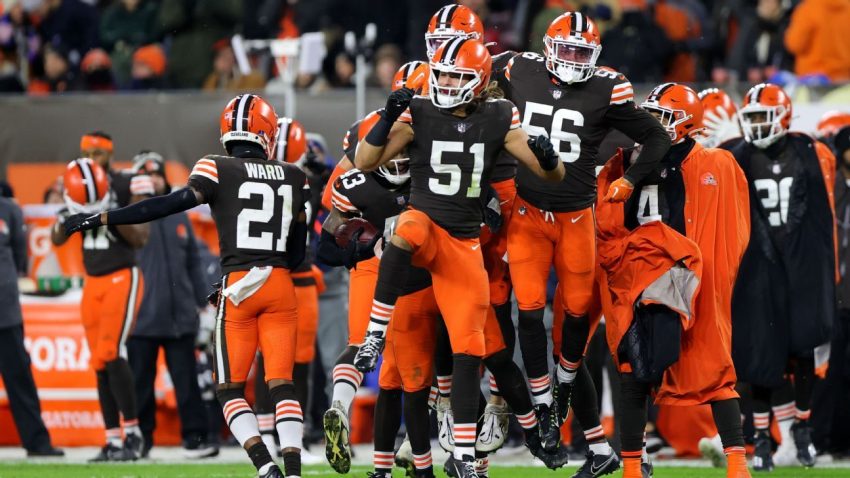 CLEVELAND — Down to a desperation drive Saturday night, Baltimore Ravens quarterback Tyler Huntley scrambled around looking for an open receiver. Once again, there weren’t any.

Moments later, Cleveland Browns defensive end Myles Garrett tracked Huntley down for a sack; then sacked Huntley again along with tackle Perrion Winfrey on the following play, effectively putting the Ravens away.

• Can Rams, Packers rebound in ’23?
• Dolphins encouraged despite loss
• Can Lamar save the Ravens’ offense?
• Trubisky’s last act with the Steelers? Vindication
• Panthers need to ‘get ourselves right’

The sequence underlined Cleveland’s defensive dominance in a 13-3 win over the Ravens. And underlined how much the Browns defense has quietly improved in recent weeks.

“It showed who we can be,” said Garrett, who has spearheaded the unit’s defensive resurgence and now leads the NFL in pass rush win rate (28.9%) among edge rushers, despite facing the league’s second-highest double-team rate (31.9 %).

Ultimately, Cleveland’s moderate turnaround defensively will likely prove to be too little and too late.

The Browns (6-8) hold just a 0.7% chance to make the playoffs and have already been eliminated from the AFC North division race.

Cleveland would first need to win its final three remaining games (vs. the New Orleans Saints, at the Washington Commanders, at the Pittsburgh Steelers), then would need two of the Los Angeles Chargers, Miami Dolphins and Ravens to lose out. And even in that scenario, the Browns would probably need more help elsewhere. More realistically, the Browns will be mathematically eliminated from the postseason this weekend, even with a victory on Saturday over the Saints (1 pm ET, CBS).

It remains to be seen what changes the Browns will make this offseason after what figures to be a disappointing year. Despite boasting an elite pass rusher in Garrett and a premier cover corner in Denzel Ward, Cleveland’s defense has underachieved for much of the year. That has raised the possibility they could make changes on that side of the ball, starting with third-year coordinator Joe Woods.

But whatever the Browns choose to do with their coaching staff or personnel, they now at least have an opportunity to take some momentum into the offseason.

“At the end of the day, we are where we are. … we have to carry that momentum through the end of the season and into next season,” said Garrett, pointing out that the Browns aren’t completely out of the playoff hunt yet while conceding that it would take a lot for the Browns to still make a serious run.

“You want to keep on stacking these wins. When you’re looking back, watching film and sitting down with [the coaches] in the offseason, that’s really something to do [fall back] upon — when you’re looking to come into next season hot.”

The Browns rank just 17th in defensive efficiency. But at one point in mid-October, they ranked 31st.

“I think we’re getting better and better each week,” said Ward, who had a key interception in the red zone against the Ravens, stifling one of Baltimore’s best — and only — touchdown opportunities. “The biggest thing has been trying to get takeaways to put our offense in good field position. We’ve been getting better at that.”

Forcing more turnovers has indeed fueled the improved defensive performances. Since Week 13, the Browns have forced seven turnovers, fourth-most in the league.

Before that, Cleveland was tied for second-to-last in creating turnovers.

“There is an element … of bend but don’t break. That does happen on defense at times,” said coach Kevin Stefanski. “When you make a big play … those are changing the course of the game, when you talk about taking it away.”

This season might look different if the Browns had been doing that earlier in the year. At least they’re doing it now — while playing better defense across the board.

It probably won’t be enough to save this season. But it does give the Browns, and their surging defense, something to point to heading into the next one.