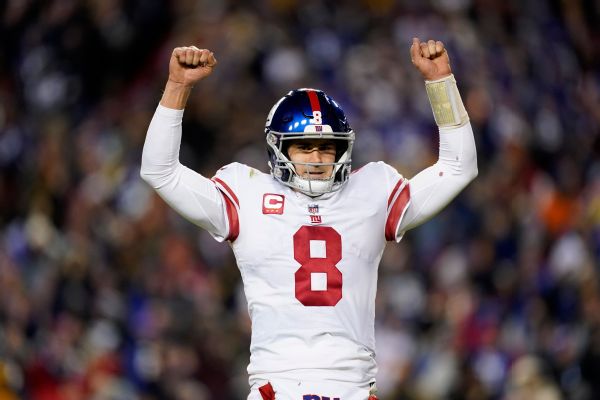 EAST RUTHERFORD, NJ — It has been a learning process for New York Giants quarterback Daniel Jones. Everything from how to use his legs, protect the football, execute when it counts the most and even win football games at the NFL level.

He feels he’s finally figured it out with the Giants having already assured they won’t have a sixth straight losing season.

New York (8-5-1) is on the verge of reaching the postseason for the first time in Jones’ career. This is the first year the Giants have even had a winning record — at any point — since he was drafted sixth overall in the 2019 NFL draft.

Jones believes he has learned how to win.

“I think I have gotten a better idea of ​​what wins in the NFL,” Jones said Tuesday, just 48 hours removed from the biggest victory of his career. “A lot of times it’s not what you would think. I think it has a lot to do with taking care of the ball and staying in good situations for the offense and executing on critical downs and scoring in the red zone.

“I think I’ve improved a lot since my rookie year.”

Jones’ rookie season had its flashes (such as the winning touchdown run in his NFL debut and a five-touchdown performance later in the season against Washington) under former Giants coach Pat Shurmur. But there were also serious struggles taking care of the football.

Jones had 11 fumbles lost in 13 games as a rookie. He also had 12 passes intercepted. Jones threw double-digit interceptions in each of his first three professional seasons. He has thrown the fewest (4) of any quarterback who has started more than 10 games this year under a new coaching staff led by Brian Daboll.

To what does he attribute the sudden drastic shift?

“Give credit to him,” Daboll said. “He’s got to take care of the ball in the pocket, and he’s got to be the one to make good decisions when he’s under pressure. I think [quarterbacks coach] Shea [Tierney] has done a really great job with him in the quarterback room. We try to do things that accentuate his strengths. I think he can throw it on all three levels, but there’s a way to play each game against each opponent based on what they have defensively, how their rush is, what their corners look like.

“He’s done a good job of operating and executing our offense.”

There has been a learning curve figuring out what is necessary to win at the NFL level out of Duke. Jones believes he has made massive leaps in some of those key areas, particularly his ball security.

“Yeah, I’ve improved in some of those decision-making situations,” he said. “Protecting the ball is a big part of the game at this position. So, I’ll try to keep doing that as well as I can.

“A lot of credit to our group. Guys, when you protect the ball, that is a group thing. Got to be on the same page, a lot trust in the receivers being in the right spots. They’ve done a good job with that. Good job by the coaches too. Yeah, it means a lot.”

It couldn’t come at a better time for Jones. The Giants are on the verge of ending a five-year playoff drought. They turned down the fifth-year option in Jones’ rookie contract earlier this year. He’s set to become a free agent after this season.