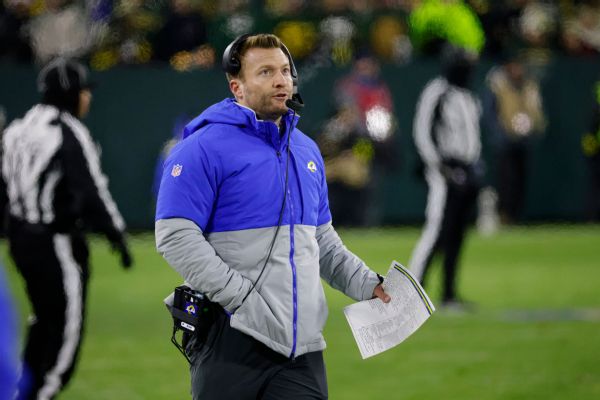 GREEN BAY, Wis. — The Los Angeles Rams were eliminated from playoff contention with Monday night’s 24-12 loss to the Green Bay Packers, in the midst of what Rams coach Sean McVay called “a very humbling season.”

Following the game, McVay was asked whether he could have imagined Los Angeles’ 4-10 record the season after winning Super Bowl LVI.

“I think it’s hard to say that you could,” McVay said. “You certainly can’t, but this is the reality that we’re in, and this is where we’re at. … My job is to focus on [finishing] up the season with the right competitive spirit, with the mindset and mentality that’s reflective of who those guys are in the locker room and who those coaches are. And that’s what we’ll do.

“But there’s been a lot of things that I’ve kind of thought about that I think you can make sense of why you’ve gotten here, but it still doesn’t make it any easier. And it’s a very humbling season, for sad.”

The Rams’ elimination came in Week 15, marking the second earliest that a defending Super Bowl champion has been eliminated in the past 30 years, according to ESPN Stats & Information research. They are the ninth such team to miss the playoffs in that span.

The Rams’ 10 losses tie the 1999 Denver Broncos for the most ever by a team coming off a Super Bowl victory.

“This has been a real struggle in a lot of instances,” McVay said. “A lot of adversity that we’ve gone through. But I think what we’ve seen from our guys is they’re going to continue to battle. They’re going to finish up these last three games the right way, with the right mindset and mentality, and we’ll compete to the best of our ability. And that’s all I know how to do, and I trust that that’s exactly what we’ll do collectively as a group.”

On Monday, the Rams were held to 12 points or fewer for the fifth time this season. Los Angeles was held to 12 or fewer points five times in the previous three seasons combined, according to ESPN Stats & Info.

LA running back Cam Akers said that even though the Rams can’t make the postseason, the team can play spoiler for its remaining three contests.

“Obviously, not what we wanted it to be, but got to keep going,” Akers said. “We got three more games and … we can piss in other people’s cornflakes. If we can, we want to do that. So, just want to play these last three games like that.”