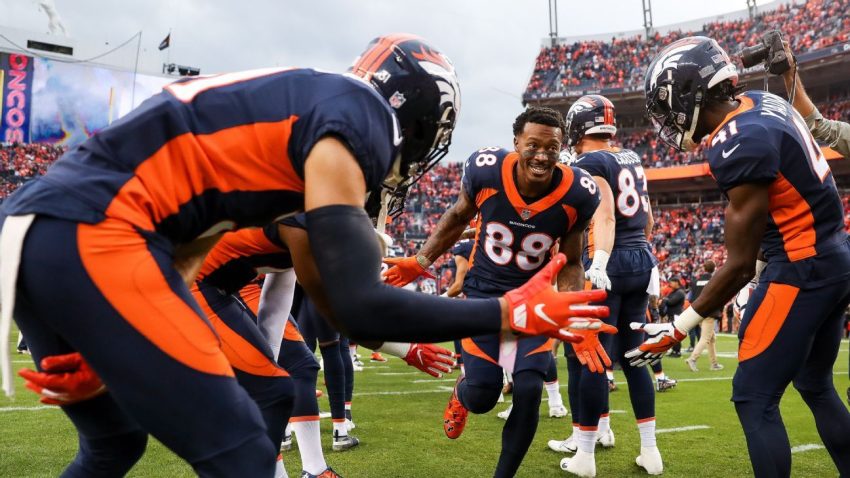 ENGLEWOOD, Colo. — It’s another NFL Friday, this one the day before the Denver Broncos will travel to Charlotte, North Carolina, for a game against the Carolina Panthers.

Safety Kareem Jackson, like the rest of the teammates around him, tries to toss all the essentials in his bag before equipment manager Chris Valenti announces he needs it.

Jackson holds a hanger in his left hand — the No. 88 jersey will make another trip. A reminder of friend and teammate Demaryius Thomas, who died last year at age 33 due to complications from a seizure disorder. Thomas played 10 seasons in the NFL — eight with the Broncos, including their Super Bowl 50 victory — and finished his career as the Broncos’ second-leading receiver (9,055 yards). He would have turned 35 on Christmas Day.

The jersey has traveled from Jackson’s locker to every home and road game, including across the Atlantic Ocean to London in Week 8. And each day at the team’s suburban training complex, it’s been right there.

“At first, I wasn’t really all the way sure why I wanted to keep it with me,” Jackson told ESPN as he tilted it to show several grass stains down the back. “It just seemed like what I wanted to do , what I should do. It was important for me to remind myself, to feel his presence, because how he did things, how he carried himself. And when I look at it, you … see the green, the grass stains, that’s what pops out at me.

“He put them there, you know, trying to get everything he could out of every play. Maybe it’s because it’s that, it’s from the ground, from a game we were in together. I just see that green, it just kind of stops me every time.”

Jackson traded jerseys with Thomas after a Week 16 game in 2013 in Houston. Jackson was in his fourth season with the Texans when he snagged the No. 88 jersey in road white with orange-trimmed blue numbers. Then-Broncos quarterback Peyton Manning had set the NFL’s single-season record for touchdown passes in that game, throwing his 48th, 49th, 50th and 51st of the season. “I look at it now and I think about trading with him, my jersey for his, the season he was having then, the look on his face, what he said,” Jackson said. “I sit here now and it’s not just that, I look at it and it’s playing basketball against him in high school, his laugh, the smile, you know, kind of everything.”

Thomas and Jackson met as teenagers growing up in central Georgia, becoming fast friends and playing summer league basketball against each other.

For Jackson, the memory of Thomas washes over him as he sits by his locker, taping what needs to be taped, studying what needs to be studied or finding something more comfortable to slide on his feet after another workday. For months Jackson has faithfully, for reasons he can’t always explain, carried the jersey through this unexpectedly lost Broncos season (4-10).

What was and what could have been, all in those tightly woven threads.

VALENTI HAS BEEN the Broncos’ equipment manager for as long as anybody in the building can remember — 26 years officially. He’s cared for thousands of jerseys over the years, making them look like new again every week. To him, numbers are memories, symbols of lives lived, careers made. John Elway’s No. 7, Terrell Davis’ No. 30, Champ Bailey’s No. 24, “some of them, a few, there is that one person that will always jump to the front of your mind when you see it.” “And 88?” Valenti said of Thomas. “Him, always. Always.”

Every Saturday of a football season, Thomas would bring donuts for the team’s equipment staff, boxes to be divided up among those in the building whose work keeps the hive thriving.

The boxes still arrive each Saturday as wide receiver Courtland Sutton does what he saw Thomas do, so he can, as wide receivers coach Zach Azzanni said, “carry on Demaryius in his own way.” “Five, six [dozen] of them, he’d bring [in] to the equipment room because it kind of ended up I’d separate them, make sure they got to the training room and all around and it was the same mix,” Valenti said with a laugh. ” … I think of (Thomas) all the time when we do that. There were a couple times when something came up and (Thomas) was running a little behind and the people from the donut shop would just bring them over because they knew he should have been there by now and they wanted to help him too.”

THOMAS WAS IN his fifth NFL season when quarterback Peyton Manning arrived in Denver in 2012. What followed over the next four seasons on the field was historic. Thomas had at least 90 receptions and 1,300 yards receiving in all four of those years. He joined Hall of Famers Marvin Harrison and Jerry Rice as well as Torry Holt as the only players to reach those totals over four consecutive seasons.

Manning recalls how children were drawn to Thomas, and how he always seemed to know exactly what to say or when to listen.

Thomas often said “some of those kids might be like me, some not, but they’re all kids and they all should know people love them.” Manning’s children — Marshall and Mosley — would sprint to Thomas whenever he crossed into view in the locker room. The snapshots remain across Manning’s life, the smiles on the faces of his children, in Thomas’ arms, chasing Thomas across a practice field, throwing Thomas a ball, all there as he scrolls through the photos on his phone .

“You know on your iPhone, the pictures pop up … ‘five years ago today’ type deal, and it seems like every day different pictures of Demaryius with Marshall and Mosley, he and I out at practice, just pictures that pop up ,” Manning said.[We] miss him, makes me sad at the same time, but I know that people are thinking about him.”

“I’ve got a lot of pictures of DT … where we sit at the stadium, and in my office, there’s this great picture of me and Demaryius after a touchdown, great big old smile on his face,” Manning said “What Kareem does, what he’s doing with that (jersey), that’s special,” he added. ” … That’s carrying on DT’s legacy. Just special.”

Erich Schubert has been with the Broncos for 15 seasons, since he was an intern with the media relations department, and helps oversee the team’s digital media efforts.

One of Schubert’s favorite photographs is of his eldest of two sons, Cade, now 10, on the sideline years ago before a Broncos game, slapping the hand of a smiling Thomas, in uniform. Cade was 5 or so at the time, Thomas his favorite player on the beloved team for which his dad works. Schubert had the photo, shot by an Associated Press photographer, framed and signed by Thomas as a present to Cade one Christmas.

“His all-time favorite player,” Erich Schubert said. “He has that photo on his wall.”

Last December, the day after Thomas died, Schubert told his son what happened.

“He was devastated, just devastated,” Schubert said. “And we talked about it, and it was really hard and then later that night everybody kind of settled down a little, he was getting ready for bed and I was walking by and just looked in. And I saw he had taken the picture off his wall in the bedroom and leaned it up against the mirror in the bathroom, and he was just standing there, looking at it while he brushed his teeth. He just took it in there with him and then carried it back to his room to go to bed.”

THOMAS’ MOTHER, KATINA Smith, did not see Thomas play in a game until the Broncos’ 23-16 victory over the Pittsburgh Steelers in an AFC divisional round on Jan. 17, 2016.

Manning gave Thomas the game ball seconds after the victory to give to his mother. Two wins later, the Broncos were Super Bowl 50 champions. “That ball Peyton gave us is probably my favorite football memory,” Smith said. “My first time to see Demaryius play, every time I see it I think of that day.”

Thomas and Smith’s relationship gained national attention around Denver’s Super Bowl 50 run. Smith began serving a prison sentence in 1999 related to cocaine distribution charges. President Barack Obama reduced her sentence in 2015, which allowed her to see her son fulfill his football dreams. Thomas’s death came two weeks before his 34th birthday. Smith said this past week “will always be the toughest time in every year.” As she looks through the camera roll in her phone, she lists the reminders of Thomas — his smile, his way. Reminders of a walk they took to work out at a local high school — “we did all kinds of funny pictures that day” — or a smiling Thomas towering over her before a game.

“All those pictures you take thinking you’ll have so many, but now you wish you had more,” she said.

Smith withdrew a bill from an ATM machine in recent days; an unknown person in an unknown place for an unknown reason had written “DT” in black marker in the upper right corner. It made her pause “just to get my breath back,” much like each time a car passes here with the numbers 88 or 1225 somewhere on the license plate, or 33, his age when he died.

“I call them all my signs,” Smith said. “Just those things that make me think of him. And that type of thing, what Kareem is doing, I’m so glad to know, I hope he knows that, that helps me get through it. It’s genuine, it’s friendship, it’s a blessing.”