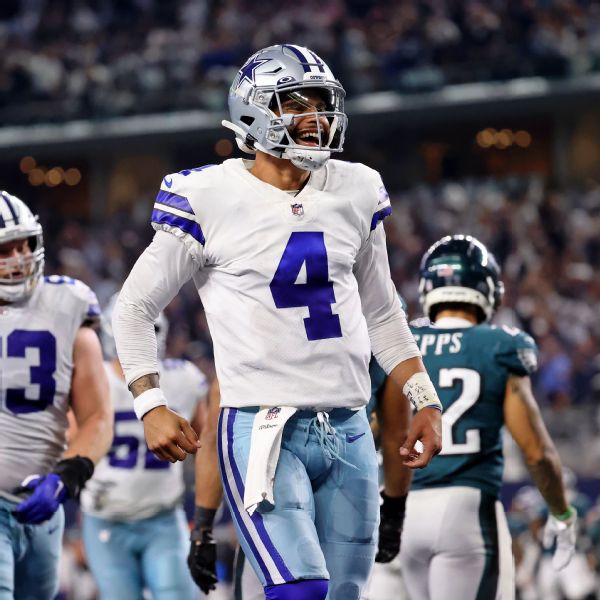 FRISCO, Texas — Whether or not the Dallas Cowboys can wrest the NFC East from the first-place Philadelphia Eagles, a win Saturday could make a statement if these teams were to meet again in the playoffs, according to Dak Prescott.

The Eagles (13-1) will win the division and claim home-field advantage in the playoffs with one win in their final three games. They might be without quarterback Jalen Hurts, who is dealing with a sprained right shoulder and remained out of practice Wednesday.

In October, the Eagles beat the Cowboys 26-17 at Lincoln Financial Field.

“You lose the first one, you can’t wait to see them again, so I mean, I wouldn’t say it’s anything specific to this team,” running back Ezekiel Elliott said. “I think it would be like that with any team in our division. But, I mean, yeah, definitely want to see the team again. It’s just part of being a competitor and loving this game.”

The Cowboys have posted wins against the 11-win Minnesota Vikings, the current No. 2 seeds in the NFC, and the 10-win Cincinnati Bengals, the leaders of the AFC North. They also swept the 8-5-1 New York Giants.

Their only loss to a team with a winning record at this point this season was to Philadelphia.

Prescott did not play in the first meeting, as he was coming back from surgery on his right thumb. It was in a long pregame workout that day, however, that he finally felt as if he was ready to return to game action. The Cowboys have gone 6-2 since Prescott’s return, with both losses coming in overtime, at the Green Bay Packers and Jacksonville Jaguars.

“I think everybody in this locker room is looking forward to this rematch in that sense. When you play a team that’s a division rival, understanding the long history that comes with these two teams, understanding that they’re playing their asses off. They ‘re having a hell of a season,” Prescott said. “For them to be in our division and that they control the destiny in winning the division right now, yeah, you just want to get in and get another shot and make sure you put your best foot forward in doing so.”

Despite the loss to the Jaguars, the Cowboys clinched a playoff spot when the Giants beat the Washington Commanders later Sunday. It’s the first time the Cowboys have made the postseason in consecutive years since 2006-07.

“Made the playoffs before; I want to make a run,” Elliott said. “You can make the playoffs and — we’ve seen it — lose in the first round. That does not taste good, don’t feel good. It’s almost worse than not even going to the playoffs. So I mean just do whatever we can to get back to that team this week is doing what we need to do to get ready to beat Philly and then just building on that and making sure we put our best foot forward when the playoffs come.”