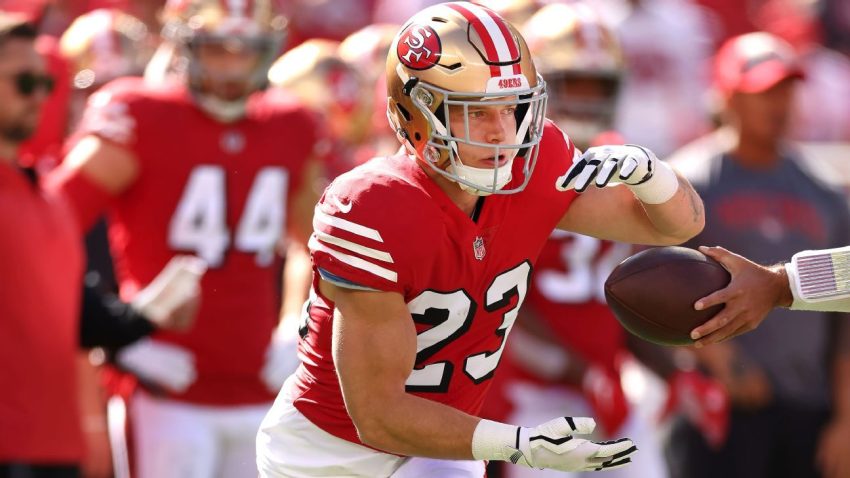 The rosters for the 2023 Pro Bowl are set, with Dolphins quarterback Tua Tagovailoa leading the league in votes from fans but not making the AFC roster. Patrick Mahomes (Chiefs), Josh Allen (Bills) and Joe Burrow (Bengals) instead made the team, as Tagovailoa was the odd passer out. In the NFC, the quarterbacks are Jalen Hurts (Eagles), Geno Smith (Seahawks) and Kirk Cousins ​​(Vikings).

The Eagles lead the way with eight Pro Bowl selections, followed by the Cowboys and Chiefs (seven) and Ravens and 49ers (six). The NFL announced Monday that Rams defensive tackle Aaron Donald and Packers cornerback Jaire Alexander were the first two NFC players to make the roster. This is Donald’s ninth consecutive year being named to the Pro Bowl.

The Pro Bowl will have a different look this year, moving away from the traditional football game. Instead, players will now participate in a weeklong skills competition that will conclude with a flag football game. The AFC will face the NFC on Sunday, Feb. 5, at Allegiant Stadium in Las Vegas, live on ESPN, ABC and ESPN+ at 3 pm ET.

Which players were snubbed from these rosters? Who should each of the snubs replace? And which players that were left out should make it in 2023? We asked our NFL analysts and reporters to weigh in, with sports analytics writers Seth Walder picking snubs and the rest of our panel answering two questions.

Let’s get into all the buzz surrounding the 2023 Pro Bowl, starting with which players were snubbed.

Who he should replace: Trevon Diggs, CB, Cowboys

Bradberry is the most egregious snub on the board. He allowed 0.6 yards per coverage snap and minus-37 EPA as the nearest defender, according to NFL Next Gen Stats, which are both best by any outside corner with at least 250 coverage snaps. Those aren’t just Pro Bowl numbers — they’re numbers that should put him in the conversation for Defensive Player of the Year.

Who he should replace: Miles Sanders, RB, Eagles

Sanders might have had the better season on the ground, but what McCaffrey brings in the passing game is worth much, much more. McCaffrey’s 2.0 yards per route run is best among all backs with at least 15 routes per game, and his 79 Overall Score in the Receiver Tracking Metrics is second-best among running backs.

Who he should replace: CJ Mosley, LB, Jets

Edmunds ranks sixth in run stop win rate among linebackers and ranks lowest and second-lowest at the position in yards per coverage snap allowed and total expected points added (EPA) allowed, per NFL Next Gen Stats.

Side note: Inside linebackers really get the short of the stick with these rosters — just two per conference — while edge rushers effectively get six per conference.

Who he should replace: Kirk Cousins, QB, Vikings

There’s no super-obvious candidate for the third NFC quarterback spot, but Goff’s numbers are clearly better than Cousins’. He’s over 10 points clear in QBR (62.5 to 51.6) and is leading the offense that ranks third in EPA per dropback this season. Third! And he did all that despite not having as strong a receiving group to throw to as Cousins.

Who he should replace: Terry McLaurin, WR, Commanders

Lockett ranks second in both Open Score and Catch Score — and is tied for second in Overall Score with Justin Jefferson — in the Receiver Tracking Metrics, an indication of his exceptional skills that have gone long overlooked. In a season in which Russell Wilson floundered in Denver without Lockett and DK Metcalf, while Geno Smith flourished in Seattle, we shouldn’t overlook Lockett again.

Who he should replace: Jonathan Allen, DT, Commanders

Who he should replace: Quenton Nelson, G, Colts

Kansas City teammate Joe Thuney got the well-deserved nod, but Smith should have been right alongside him. Smith ranks fourth in pass block win rate among guards this season, well ahead of Nelson, who quietly has not played at his usual level this season. Nelson ranks 38th — right around league average — in the same state.

What’s the one thing that stands out most from the Pro Bowl roster release?

Tristan H. Cockcroft, fantasy football writer: Twenty-one Pro Bowlers hail from the NFC East — not to mention 13 of the conference’s 27 starters — something few us could possibly have seen coming in the preseason. The Eagles and Cowboys accounted for 15 of those, and either squad, two of the best in the league, could’ve been the source of some of my anticipated snubs. Instead, deserving candidates such as Tony Pollard (Cowboys), AJ Brown (Eagles) and Trevon Diggs (Cowboys) all made the cut. Pollard, especially, has been excellent, and I’m glad to see him included despite what has effectively been a partnership role with Ezekiel Elliott for much of the season.

Jeremy Fowler, national NFL writer: Eight Pro Bowlers wasn’t enough for the Eagles. Defensive tackle Javon Hargrave and cornerback James Bradberry are among Philly players who deserved a spot on the roster. This is the most complete roster in football.

Jordan Reid: NFL draft analyst: The biggest surprise to me was Eagles defensive tackle Javon Hargrave being left off the NFC squad. He has had one of the best seasons among all interior defenders; he’s tied with Chris Jones (Chiefs) for the second-most sacks (10) of all tackles.

Mike Tannenbaum, NFL front office insider: The juxtaposition of the quarterbacks selections by conference. In the AFC, the passers were all top-10 picks and had varying degrees of initial success, while the three from the NFC were all drafted in the second round or later, and each took time to develop.

Field Yates, NFL analyst: Just two rookies made the Pro Bowl this season, and while they play cornerback, they arrived to the league with very different paths: Sauce Gardner was in the mix for the most coveted players in the entire draft (taken No. 4 overall by the Jets ), while Tariq Woolen slid to the fifth round to the Seahawks. Both have been exceptional and very much earned their spot.

Which player didn’t make this Pro Bowl roster but will definitely make it for the 2023 season?

Cockcroft: Breece Hall, RB, Jets. He was on a Pro Bowl-caliber trajectory before tearing his ACL in Week 7, and while the lengthy recovery required for that particular surgery could cause a sluggish start to his 2023, he has the skills to take off in a big way by midseason and make the cut.

Fowler: Christian McCaffrey, RB, 49ers. A full season in San Francisco would have earned McCaffrey his second Pro Bowl nod. In eight games with the Ninera, he is averaging 110 total yards per game along with seven total touchdowns.

Ride: Kayvon Thibodeaux, DE, Giants. The rookie No. 5 overall pick is slowly starting to come into his own. He has sacks in back-to-back games and is starting to turn his pressure into quarterback takedowns. Expect that to continue in Year 2.

Tannenbaum: Austin Ekeler, RB, Chargers. In addition to his nine rushing touchdowns, he has 95 receptions (and five more scores) — with three more games to go. Ekeler is an incredibly productive and versatile player.

Yates: Justin Fields, QB, Bears. Chicago is in good hands with Fields, and the league is fortunate to have him as one of the best young players in the game. His breakout this season is just the beginning.