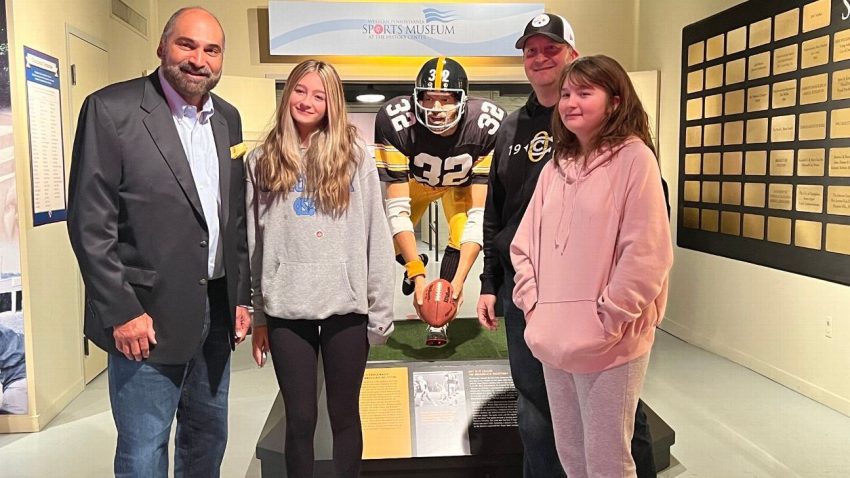 PITTSBURGH — Sitting in front of his 22-year-old likeness frozen in the moment of his history-defining play, Pittsburgh Steelers Hall of Fame running back Franco Harris grinned. He was recounting the tedious process of creating the mold used to sculpt his face for the iconic Immaculate Reception statues that greet visitors at Pittsburgh International Airport and the Western Pennsylvania Sports Museum.

Harris remembered breathing through two straws stuck up his nose as dental alginate sat on his face, covering every pore for more than 20 minutes. As the plaster-like material hardened, it captured every wrinkle and crevasse of his face. The petroleum jelly he slathered on before the alginate was applied was supposed to make it easier to remove the dried cast, but some of his beard and eyebrow hairs remained embedded in the mask when artist Gerry Embelton carefully peeled it away.

“It wasn’t bad until they tried to take it off, and then they’re taking my beard off with it,” Harris said with a chuckle. “My beard hair did grow back.”

For 15 minutes Tuesday morning, Harris sat across from me and told me about the statue and what it meant to him.

“I thought that’d be a nice way to greet people coming into Pittsburgh,” Harris said, “… it was only supposed to be up, I believe, for six months or a year. And I’m still standing. “

Less than 24 hours later, Harris’ son, Dok, confirmed his dad died overnight. Waking up to the news was surreal. I was just with him. How could he be gone?

If Harris was slowing down at 72 years old, his schedule and zest for life didn’t show it. He had the same twinkle in his eye as he told stories in his signature deep, soft-spoken tone. Our interview was one of dozens of appearances and events he had lined up this week for the 50th anniversary of the Immaculate Reception.

A sold-out panel was scheduled for Thursday — Franco Harris and the Immaculate Reception: 50 Years Later — featuring a Steelers trio of Harris, Joe Greene and John “Frenchy” Fuqua, and Oakland Raiders linebacker Phil Villapiano at the same museum where Harris spoke with me Tuesday morning. There was also a smaller, intimate dinner for his friends and family scheduled at the museum this week.

On Friday, the actual anniversary of the play, there would be a screening of a documentary about his life, followed by a public ceremony at the site of the Immaculate Reception at 3:41 pm — the exact time of the play — a team photo with members of the 1972 squad, and a reair of the original radio broadcast of the play that changed the course of a franchise.

And Saturday, the weeklong celebration would culminate at halftime of the prime-time game against the Las Vegas Raiders, where Harris’ number would be officially retired, the third in the history of the Steelers organization.

That’s what made the news Wednesday morning all the more jarring.

“I don’t think they’re just putting anybody up at the airport,” defensive captain Cameron Heyward said Wednesday. “Franco was the guy. For as many accolades as he got, he always deflected to so many other people. It was a pleasure to just meet him. The way he went about respecting people after him was incredible. It could be one of those things where ‘I won and you’ve got to do it my way,’ but he always welcomed everyone.

“He always had the utmost respect for every player, every person in the city. There was just a level of humility when you talk to Franco. We lost a good one today.”

If the Fort Pitt Tunnel is the city’s front door, Harris’ airport statue is the doorman, greeting every traveler to a region he embodied with a play that transformed a tough-luck franchise into a dynasty.

The statue connects the old generation of football fans — like the ones who swear they were there that day — to the football novices, giving parents and grandparents opportunities to educate their descendants about the miraculous play every time they pass the landmark. Christian Brennan, a Pennsylvania native who lives in Denver, recently returned home and introduced his 4-year-old son, Miles, to Harris and his statue.

“After snagging a selfie with Franco, we stopped at Primantis right there in the airport, grabbed a kielbasa sandwich, and I made [Miles] watch YouTube videos of the Immaculate Reception,” Brennan wrote to me in a message. “Not quite sure he understood the significance. [But] it’s a great memory for me.”

Like Brennan, Heyward points out Harris’ statue to his son every time they pass it in the airport.

Heyward spoke with Harris Tuesday afternoon when the two recorded an episode for Heyward’s podcast.

“He was just telling me, ‘You still wouldn’t be able to touch me just in practice if I was practicing.’ And I’m just like, ‘Franco, you’re not even playing football right now,'” Heyward said, smiling at the memory. “But, he had a competitive spirit, and you just felt like he wanted to be there for you and he wanted to just interact.”

Harris had that kind of personable relationship with everyone, whether he met them five minutes or five years ago.

I saw it firsthand after our interview.

Brian Cook and his daughters, Mimi and Reese, waited quietly while Harris finished speaking, and then approached him and asked for a photo in front of the statue. But before they got a picture, the trio got a history lesson.

Their dad laughed and reminded them he was also born in the 1970s. Then, Harris quizzed the girls about the quarterback who threw him the Immaculate Reception and what number Harris wore. Harris briefed them not only on the play and Steelers history, but after he took the picture, he asked the girls what sports they played — golf and tennis — and told them about how he played golf for the first time while a student at Penn State.

Harris’ schedule was completely full that day, and as he chatted with the Cook family, Harris’ wife, Dana, reminded him a couple of times that they needed to head to their next event. But Harris wasn’t ready to leave.

He told the Cooks that he thought a higher club, like a 9-iron, was the right one from 250 yards, and a 3-iron was the correct choice for a shot closer to the green. He told them about playing with Lydell Mitchell, his Penn State teammate and fellow running back.

After about five minutes, Dana peeled her husband away from the group, and the Cooks, who were visiting Pittsburgh from their home in Northern Virginia for the day so their mom could wrap Christmas presents, continued on their tour.

Before they exited, the girls went to the gift shop and picked out a T-shirt and a hoodie. Tuesday night, Brian sent me a picture of the pair in their purchases.

Arm in arm in front of their Christmas tree, Mimi and Reese grinned in their new gear that read “Franco’s Italian Army.”