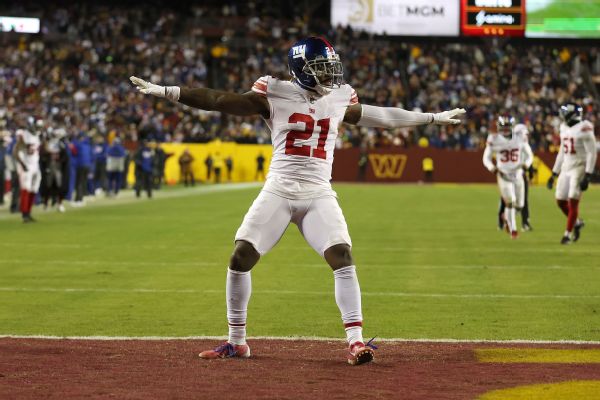 The former All-Pro safety had been on the practice squad since early October. But his role increased last week against Washington when he played a season-high 27 snaps at linebacker.

“Worked hard. Showed what I can do,” Collins said. “Getting that opportunity. That is the best part about it.”

Collins, 28, has played in three games since being signed for a second stint with the Giants. That exhausted his available practice squad elevations.

In order to play Saturday afternoon against the Minnesota Vikings, he needed to be signed to the active roster.

“It’s exciting,” Collins said. “It’s exciting because now you get to really contribute. Now you get to make some plays for this team and make that run. The run is as big as it comes. This opportunity is a blessing and I’m thankful for it.”

There are scenarios this week for the Giants (8-5-1) to clinch a playoff berth for the first time since 2016. Collins was part of that team.

Collins had three tackles in Sunday night’s 20-12 win on the road against Washington. That included a key third-down stop in the second half which caught the attention of the Giants’ coaching staff.

It has been quite the journey for New York’s second-round pick in 2015. Collins spent the first four years of his career as a standout on its defense, before signing a lucrative free agent contract with Washington in 2019.

But injuries derailed his career. Collins tore his Achilles in 2020 and he was ultimately, unwillingly, turned into a linebacker. He had a foot injury that ended his 2021 campaign early, and he wasn’t signed at the start of the 2022 season.

The Giants gave him a chance to grind his way up several weeks into the season.

“It’s definitely humbling,” Collins said. “But I’ve always been that way. Always been a worker. There is nothing that has ever changed. Never came here with expectation or anything like that. Came here just to go to work and be back in the building. That is the best part about it.”

This is what the Giants have liked most about Collins. He fits with their new culture under coach Brian Daboll and general manager Joe Schoen.

“And again, that’s not easy to do whether it’s Landon or a guy like that [wide receiver Darius] Slayton. … There’s a mental toughness that you need to have to play this game, and it’s not just after a loss. Maybe it’s from play time; maybe it’s another thing that you got to keep pushing and keep a positive attitude. And he’s done that.”

The Giants cut former starting inside linebacker Tae Crowder earlier this week to make room for Collins on the roster. Crowder re-signed Thursday with the Giants’ practice squad.