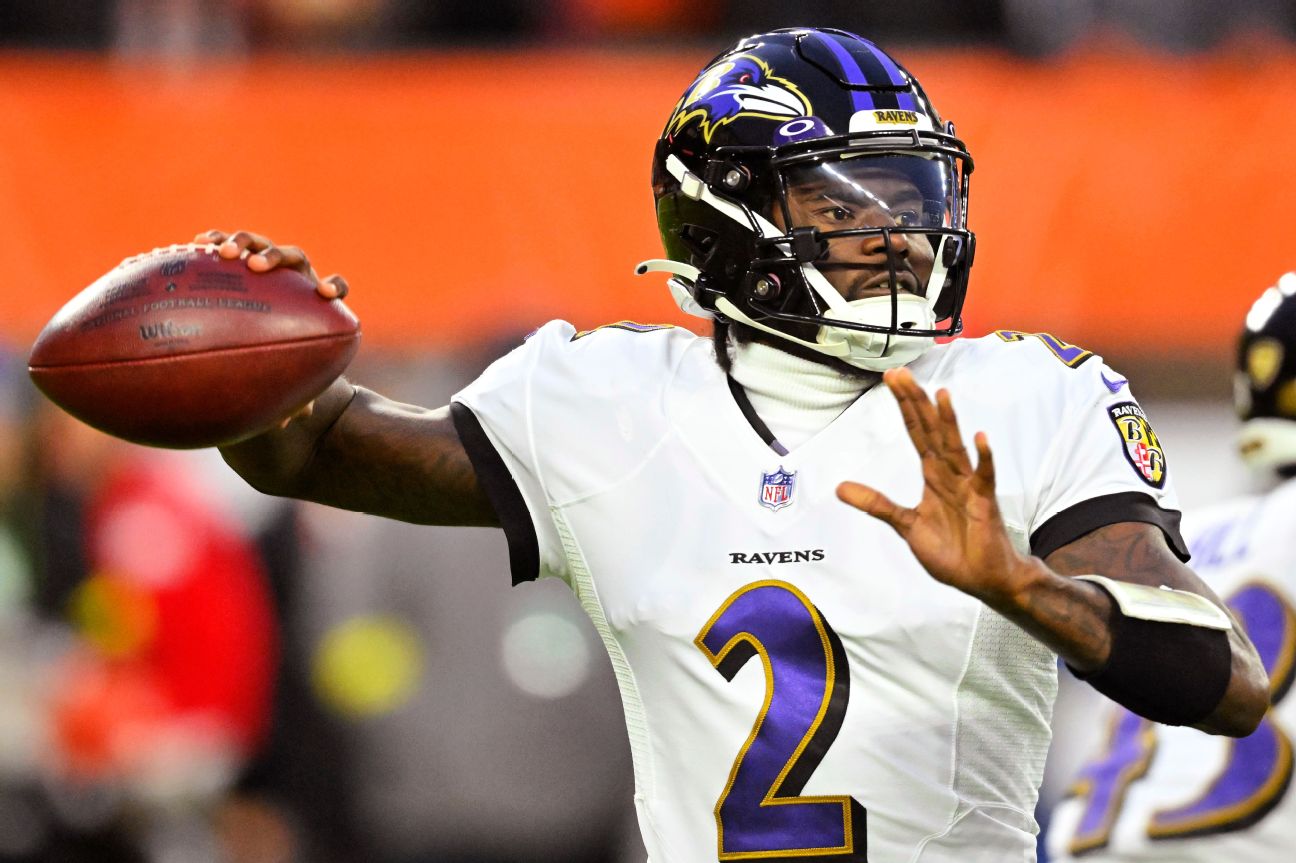 OWINGS MILLS, Md. — The Baltimore Ravens are looking to clinch a playoff berth Saturday, but they’ll have to try to do it without Lamar Jackson.

With Jackson sidelined with a knee injury for a third straight week, Tyler Huntley will start at quarterback against the Atlanta Falcons, Ravens coach John Harbaugh confirmed Thursday.

There was some question about Huntley’s availability after he was limited in Wednesday’s practice with a right shoulder injury and did not throw during the media viewing window, but he was back throwing at Thursday’s practice, delivering passes with the same velocity as he usually does.

Asked if he had any concern with Huntley’s right shoulder, Harbaugh shook his head and said, “No.”

Huntley is officially listed as questionable on the injury report.

Huntley said the shoulder issue is similar to what he experienced in spring workouts, when he missed some time with tendinitis. After Thursday’s practice, Huntley said his shoulder felt “good.”

“It was a little sore,” Huntley said. “But they’re managing it.”

There had been optimism heading into this week that Jackson would return, but he missed all three practices. He hasn’t suited up since injuring his knee in the first quarter of a 10-9 win over the Denver Broncos on Dec. 4.

The Ravens have lost five of the six games that Jackson hasn’t started the past two years.

Without Jackson this season, Baltimore has been held to 16 points or fewer in three straight games for the first time since 2000. The Ravens have only scored two touchdowns in three games, including none in their last seven quarters.

“When we get out there, we’ve got to put it all on the line and go get us some touchdowns,” Huntley said. “That’s all that matters.”

The Ravens (9-5) can secure their fourth playoff berth in five seasons by the end of this weekend. Baltimore can clinch with a win over Atlanta and at least two losses by these three AFC East teams (the Dolphins, Patriots and Jets). The Ravens can also reach the postseason if the Jets, Patriots, Browns, Colts, Raiders and Titans all lose.

In three games this season (including two starts), Huntley has completed 70.3% of his passes (52-of-74) for 413 yards, throwing no touchdowns and two interceptions (42.3 QBR). Since Week 13, Huntley and Mike White are the only quarterbacks to attempt over 70 passes and not throw a touchdown.

Saturday’s game against the Falcons could be one of the coldest games in Ravens history and feature wind gusts of over 20 mph.

“I don’t think it’s going to have too big of an effect because we know going into the game that it’s going to be conditions,” Huntley said. “So, we just got to prepare for it and just be ready to play football at the end of the day.”