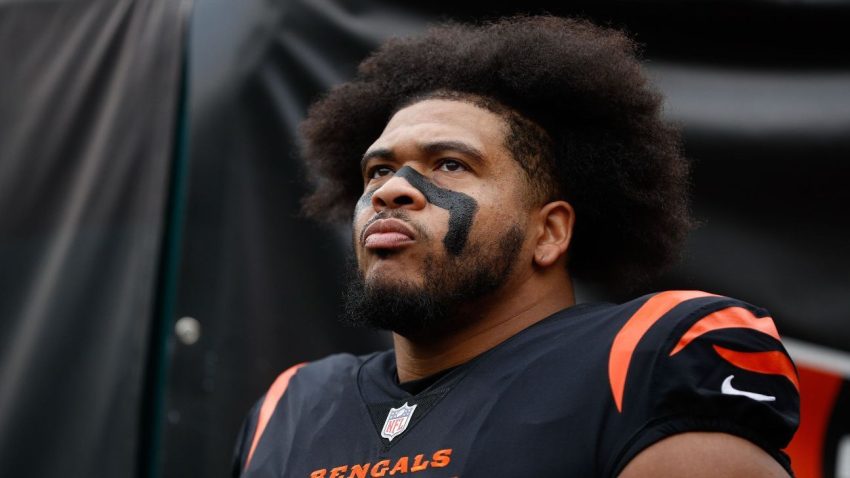 Collins said that initial tests showed that he may not have suffered any structural damage after he was carted back to the locker room in the 22-18 victory at Gillette Stadium.

“My knee feels pretty stable,” Collins told ESPN. “We’re going to from there.”

Collins, who has started all 15 games for the Bengals this season, left the game in the first quarter after a blindside collision in the pocket. As quarterback Joe Burrow was maneuvering in the pocket, Patriots defensive lineman Davon Godchaux rolled up on the back of Collins’ left leg.

“I just remember someone flying in on my leg,” Collins said. “That was about it. It happened so fast.”

After spending a few minutes on the field, Collins walked back to the team’s sideline for further evaluation. Following a visit in the team’s injury tent, he was carted back to the locker room and quickly declared out for the remainder of the game.

Collins was one of three new starters on the offensive line that the Bengals acquired during the initial free agency period in 2022. He signed a three-year deal worth $21 million to shore up a unit that leaked sacks throughout the Bengals’ run to the Super Bowl in 2021.

“LC has been playing out of this world for us, and we love to have him,” said Burrow after the game. “Hopefully we’ll see him back before the year is out.”

Cincinnati (11-4) survived a massive scare from the Patriots (8-7). After the Bengals led 22-0 at halftime, New England countered by scoring the game’s final 18 points. The Patriots saw a chance at a late go-ahead TD slip away when Bengals safety Vonn Bell forced a fumble with the Patriots inside Cincinnati’s 10-yard line. Hakeem Adeniji, who started the final 13 total games for the Bengals in 2021 as the team’s right guard, came in for Collins at right tackle.

Coming into the game, the Patriots were known for a defense that was third in the NFL in total sacks and third in team pressure rate, according to ESPN Stats & Information. On Saturday, Burrow was pressured on just 10 of his 55 dropbacks, New England’s lowest rate of the season.

Those numbers came with Collins absent for the majority of the game. Despite the scare, Cincinnati picked up the victory that keeps the Bengals one game ahead of the Baltimore Ravens in the AFC North and one game off the No. 1 seed in the conference standings.

“It ain’t always pretty,” Collins said Saturday. “But as long as we got the win, that’s all that matters.”