Yes, Josh McDaniels has seen “Dumb and Dumber.” Well, the Las Vegas Raiders first-year coach was not channeling his inner Lloyd Christmas, who uttered the line after being told by the girl of his dreams that his chances with her were “one in a million” in the iconic mid-1990s comedy .

Still, it almost fits. Because even though the Raiders sit at 6-8 with three games to play, including Saturday night’s matchup at the Pittsburgh Steelers in what is essentially an elimination game (8:15 pm ET, NFL Network), ESPN’s Football Power Index (FPI) currently gives Las Vegas a 3.8% chance of making the playoffs.

Yes, we’re telling you there’s a chance — albeit one fraught with pitfalls, caution signs and a lot of mathematical equations.

“I mean, first of all, it’s confusing,” McDaniels said this week. “Second of all, the one thing that we know we have to do in order to keep going is win. So, to focus on anything other than our singular goal each week of trying to beat the opponent that we have on the schedule is kind of a waste of time and energy, honestly, because we don’t have any control over what everybody else does.

“We understand where we’re at, the ramifications of the long season … it will all eventually tell the tale of your season and then what happens, happens.” 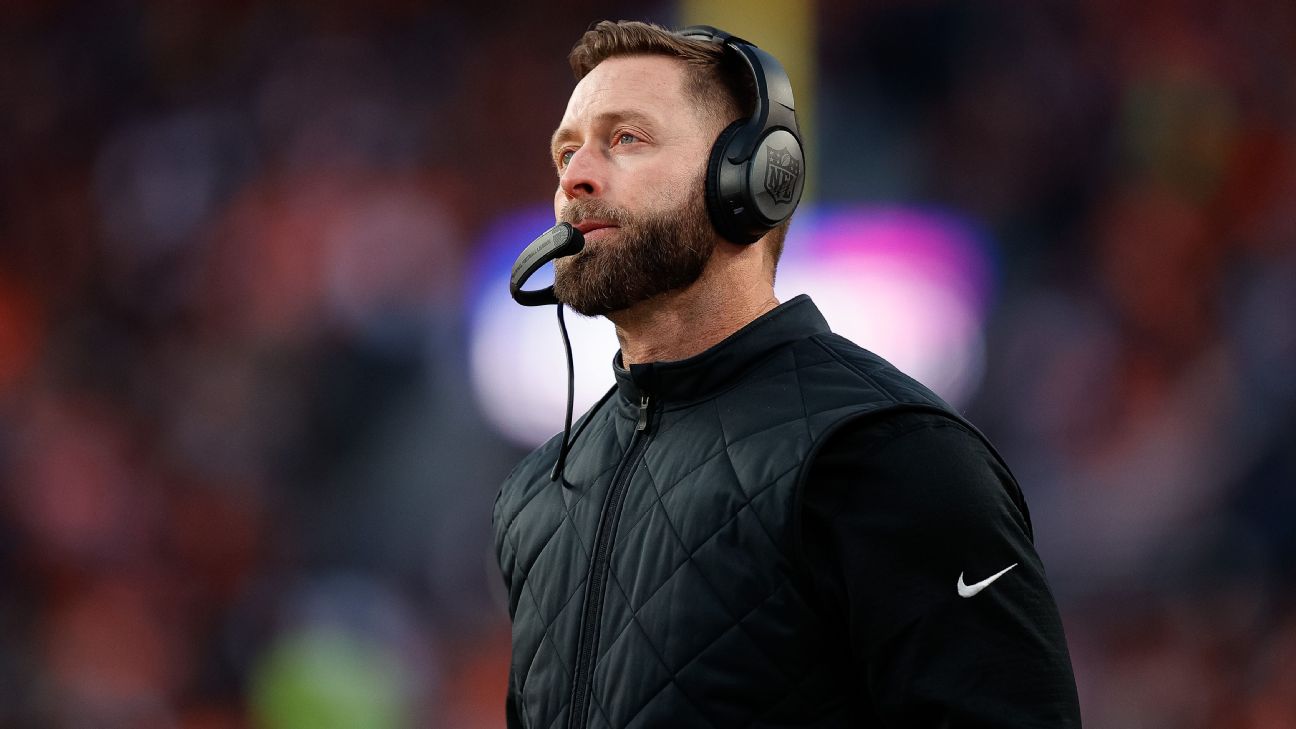 The Raiders are currently the No. 11 seed in the AFC, and seven teams from the conference go to the playoffs. As such, and in this simplest scenario, per the Las Vegas Review-Journal, the Raiders need to win all three games and would also need several other things to happen. Such as the No. 8 New England Patriots (7-7), No. 9 New York Jets (7-7) and No. 10 Jacksonville Jaguars (6-8) to lose at least one game each, as well as either the No. 6 Los Angeles Chargers (8-6) or No. 7 Miami Dolphins (8-6) to drop at least two of their final three.

The opponents for the teams the Raiders are chasing:

Consider: after beating the Texans in Week 7 to improve to 2-4, the Raiders’ playoff chances per FPI were a relatively robust 45.9%. Those chances bottomed out at 1.9% two weeks later with the head-scratching and tear-inducing loss to the Colts.

Then there’s this: FPI had the Raiders as its No. 6-ranked team in the 32-team NFL after the Texans win, No. 14 after the Colts loss and is currently No. 10, right behind the 49ers and three spots ahead of the 11-3 Minnesota Vikings.

A New York Times simulation, meanwhile, has the Raiders’ odds for making the playoffs jumping up to 60% if they simply win out.

You can excuse Raiders fans for kicking themselves after “sure” wins against the Arizona Cardinals, Jaguars, Colts and Rams turned into devastating losses.

But also remind them of the wins gifted to the Raiders by Russell Wilson inexplicably throwing the ball away to stop the clock in Denver. Or Seattle going three-and-out at midfield in OT when the Seahawks needed a few yards to kick a walk-off field goal. Or, yeah, the Patriots giving the game away last weekend on a cross-field lateral with no time on the clock of a tie game.

It all comes out in the wash, or, to paraphrase Bill Parcells, the mentor to McDaniels’ mentor, Bill Belichick: You are what your record says you are.

Still, the Raiders are drawing upon last season’s experience when they closed with an unfathomable four-game winning streak to force their way into the playoffs for the second time since 2002.

“Just trying to focus solely on this game,” Raiders quarterback Derek Carr said Wednesday. “I want to talk about it, and as a human, I could have things to say, but it really doesn’t matter unless I handle my business today. … The numbers and all that, it’s hard to stay away from it with how the world is today. But you try and stay away from it as best you can.

“All you want is a chance, right?”