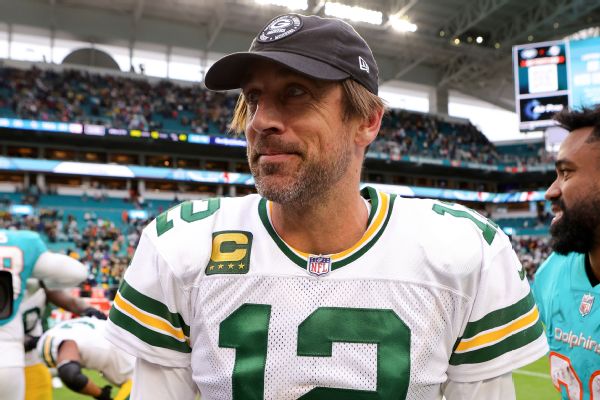 If Aaron Rodgers thought things were “looking up” for the Green Bay Packers last week, then imagine how he felt leaving Florida with a three-game winning streak after Sunday’s upset of the Miami Dolphins.

“Definitely better than three weeks ago,” Rodgers said. “Four [weeks ago]I guess, because of the bye.”

Rodgers then turned the question on a member of the Packers’ staff.

“What do you think, pretty good?” Rodgers said. “Yeah, getting better. A lot of things happened our way.”

The Packers got all the help they could have possibly gotten before they took the field at Hard Rock Stadium on Christmas Day. The four teams ahead of them in the NFC playoff race – the Seahawks, Giants, Lions and Commanders – all lost on Christmas Eve.

And then the Packers helped themselves with another comeback from double digits down – their third of the season, the most in one year with Rodgers at the helm. They turned a 20-10 first-half deficit into a 26-20 victory that has them at 7-8 heading into their final two games, both at home against the Vikings and Lions.

“I’d like to be, you know, 10-5, 11-4, but considering where we were a few weeks ago, a lot of has happened in our favor,” Rodgers said. “All the games that needed to go a certain way went a certain way. Now, there’s obviously much left, but again, we’ve played meaningful games in December, we won all three of those. Now we’re playing meaningful games in January, and we’ve got to win those.”

The Packers’ simplest path to the playoffs is to win out and then get help from either the Commanders with one more loss or the Giants with two more losses. According to ESPN Stats & Information, the Packers would still have a playoff chance if they split their remaining two games and finish 8-9, but that scenario would require additional help.

It’s a long way from where the Packers were on Nov. 6, when they lost their fifth straight game of the season to fall to 3-6. At that point, the Packers had a 9% chance of making the playoffs, according to ESPN Analytics. That number fell to 3% after Week 12 when they were 4-8. Now, they’re at 37% — their highest since Week 8. A loss to the Dolphins on Sunday would have dropped it to 3%.

A raucous locker-room celebration after Sunday’s win was emblematic of an entirely different vibe around this team in part thanks to a defensive resurgence. Despite giving up big plays to Jaylen Waddle (five catches for 143 yards, one touchdown) and Tyreek Hill (four catches for 103 yards), the Packers came up with four turnovers.

With quarterback Tua Tagovailoa playing the role of Santa Claus, the Dolphins helped to give the game to the Packers. They picked him off on three straight possessions to end the game. First Pro Bowl cornerback Jaire Alexander got him. Then linebacker De’Vondre Campbell. And finally the game-clincher by cornerback Rasul Douglas. Defensive tackle Jarran Reed started the turnover parade with a forced fumble and recovery on running back Raheem Mostert in the second quarter.

“Just keeps building our confidence,” Douglas said. “I think that’s what we are right now, a confidence-based team. Just keep getting confident by the week.”

Rodgers helped the cause, too. He reminded the Dolphins why teams don’t often blitz him. Miami defensive coordinator Josh Boyer blitzed Rodgers on 26 of his drop backs Sunday – the most he’s been blitzed in a game since Week 15 of the 2017 season. Rodgers threw for 192 yards on 17-of-23 passing and a touchdown on those plays for his second-most passing yards against the blitz over the last five seasons.

It wasn’t all ribbons and bows on Sunday, though. The Packers were ineffective in the red zone (converting just two of five trips into touchdowns) and lost two of their most explosive players to injuries in the first half — receiver Christian Watson (hip) and kick returner Keisean Nixon (groin). Neither could finish the game, but coach Matt LaFleur had no updates after the game. The Packers also lost right tackle Yosh Nijman (shoulder) and defensive tackle Dean Lowry (calf). Running back Aaron Jones’ touches also appeared to be limited as he has dealt with multiple injuries in recent weeks.

Watson had six catches, two more than his previous high for a game, for 49 yards in the first half before his day was over.

“Hopefully Christian’s not too serious,” Rodgers said. “I’m not sure what his status will be, but we had a lot of guys banged up today and a lot of guys stepped up.”