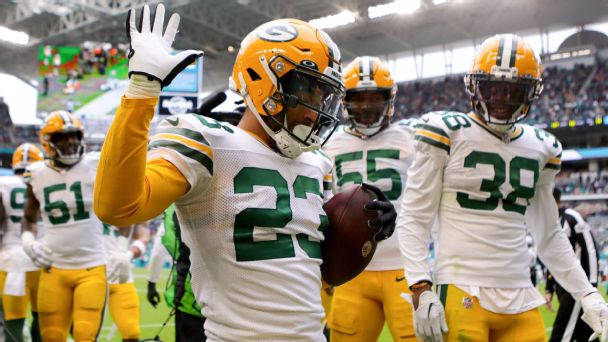 Jaire Alexander gives one of the best postgame interviews you’ll ever see and more from our NFL quotes of the week.

“Oh man, that’s easy! So I’m just lining up. I see No. 10 [Tyreek Hill] motion over … I see No. 10 coming across the field and I say, ‘Oh snap, he’s fast.’ So I backed off, and when I backed off, I saw him coming, he ran right in front of me and I was like, ‘Wow, is he really overthrowing it?’ Took it down the sideline, turned up with my guys and gave the football to a little kid wearing 23.”

“I was trying to make something happen, probably doing more than I was supposed to do. Probably should have just gone down.”

New England Patriots running back Rhamondre Stevenson, on his fumble near the goal line at the end of the Patriots’ loss against the Cincinnati Bengals

“I’m not going to second-guess Rhamondre on what he did. Rhamondre’s ball security has been pretty good all year. He had two hands on the ball, they were running him back, and they knocked it out at the end.”

Patriots coach Bill Belichick, giving Stevenson a vote of confidence. Belichick has benched running backs in the past after costly fumbles

“Load up, big fella. I know he’s going to have to take the double-teams on Sunday, so I try to feed him good.”

Indianapolis Colts quarterback Matt Ryan, on his team’s struggles this season. The Colts are 4-9-1 and allowed the Minnesota Vikings to author the largest comeback in NFL history in Week 15