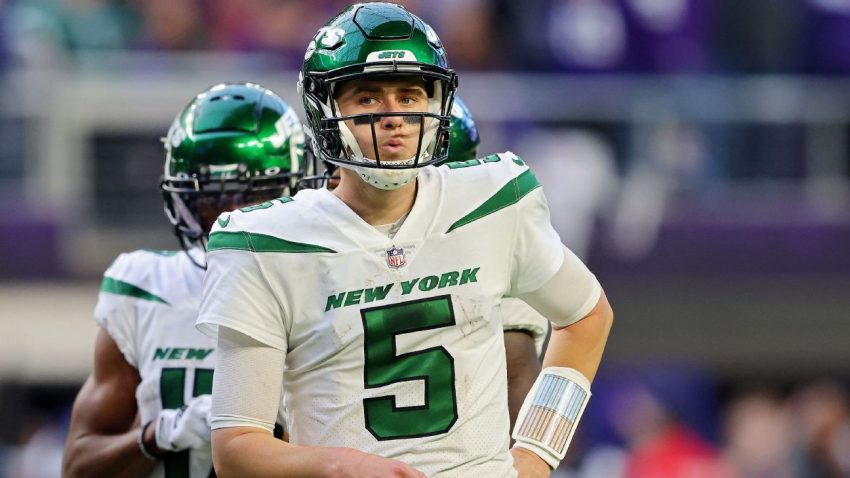 FLORHAM PARK, NJ — Mike White, a quarterback with only two career victories as a starter — who began the season as a third-stringer — returns from injury this week as the perceived savior of a New York Jets team clinging to playoff hopefully.

If this makes the Jets seem desperate, it’s because they are — they have a 10.2% chance of making the playoffs, according to ESPN Analytics — having lost four straight while experiencing a serious case of Zach Wilson fatigue. But they also have an affinity for White, the popular underdog who galvanized teammates and won their respect many times over by playing hurt and trying to convince doctors to let him play with cracked ribs.

“Obviously, the guys trust him,” said CJ Mosley, middle linebacker and team leader. “There’s a spark when he’s on the field.”

White is an upgrade over Wilson — that seems obvious — but he’s walking into a difficult situation, starting Sunday against the Seattle Seahawks (4:05 pm ET, Fox). For one thing, he has never won a start on the road (0-3), and Lumen Field is a difficult venue for visitors despite Seattle’s 3-4 home record. He also inherits an offense that has lost its way, as the running game has screeched to a halt.

It would be foolish to think White’s return against the Seahawks (7-8) after two missed starts will make everything better.

“I don’t think you can fall into that trap, because it’s not like we’ve been good in all areas,” tight end Tyler Conklin said.

Truth be told, the Jets (7-8) haven’t been good in any areas. Let’s start with the rushing attack, which coach Robert Saleh described as “putrid.”

In the past two games, facing poor to middling defenses, the running backs have gained only 49 yards on 27 attempts — a 1.8 average. They haven’t broken anything longer than 6 yards, which is mind-boggling. When a former practice squad quarterback is your leading rusher, you’ve got problems. (Chris Streveler ran for 54 yards last week.)

The offensive line has worn down in a big way, particularly left tackle Duane Brown, left guard Laken Tomlinson, center Connor McGovern and right guard Nate Herbig. They all rank in the bottom five in run-block win rate over the past two games at their respective positions, according to ESPN Stats & Information research. In fact, Brown ranks 67th out of 67 qualified tackles, and Tomlinson ranks 65th out of 68 qualified guards.

Can White’s presence change that? Doubtful. Maybe the offensive line will find a second wind against Seattle’s 31st-ranked rush defense.

One area he can improve is the pass protection. Unlike Wilson, who holds the ball too long as he waits for plays to develop, White plays with a keen sense of anticipation and processes quickly. His average release time is 2.71 seconds, compared to Wilson’s 3.13, slowest in the league, per NFL Next Gen Stats.

For his own well-being, White needs to stay clear of contact as much as possible. Sunday will mark 21 days since he fractured at least two ribs against the Buffalo Bills; it was initially deemed a three-to-four-week injury. Presumably, he will wear extra padding, but the safest form of protection is avoiding helmet blows to the midsection altogether. He has already proven his toughness.

“He’s going to try to get it done by any means necessary,” Mosley said. “Anytime you have a player of that caliber and plays with that mentality, especially at the quarterback position, you just look forward to seeing what he’s going to do.”

White plays with a point-guard mentality, making sure he distributes the ball to everyone. Not only is that good for morale, but it keeps defenses honest. The contrast with Wilson is stark.

With White, wide receiver Garrett Wilson averages 6.3 receptions for 112 yards per game. With Zach Wilson, the receiver’s averages are 3.4 and 48 yards.

The Jets’ two most prolific offensive games came with White at quarterback — 486 and 466 total yards against the Minnesota Vikings and Chicago Bears, respectively. During his three-game run, the Jets ranked fourth in total yards, displaying an aggressive, attack-all-areas-of-the-field mindset.

“The offense was running with some good efficiency,” Saleh said.

While yardage totals might be good for a quarterback’s stats and an offensive coordinator’s résumé, they don’t matter much unless they result in points. In White’s three starts, the Jets struggled in the red zone (33%) and averaged only 21.7 points per game — the league average in 2022.

Average isn’t great, but the Jets are willing to live with average because they believe their defense is good enough to overcome that. If they had reached 21 in any of their past three games, those losses would be wins.

So, in some respects, the bar is low for White. In other ways, it’s very high, perhaps beyond his reach. The Jets are hoping White and his story of perseverance can inspire them.

“[He’s] somebody who wasn’t handed everything,” Saleh said of the 2018 fifth-round draft pick of the Dallas Cowboys.

But White was handed this opportunity, a chance to save a dying season.