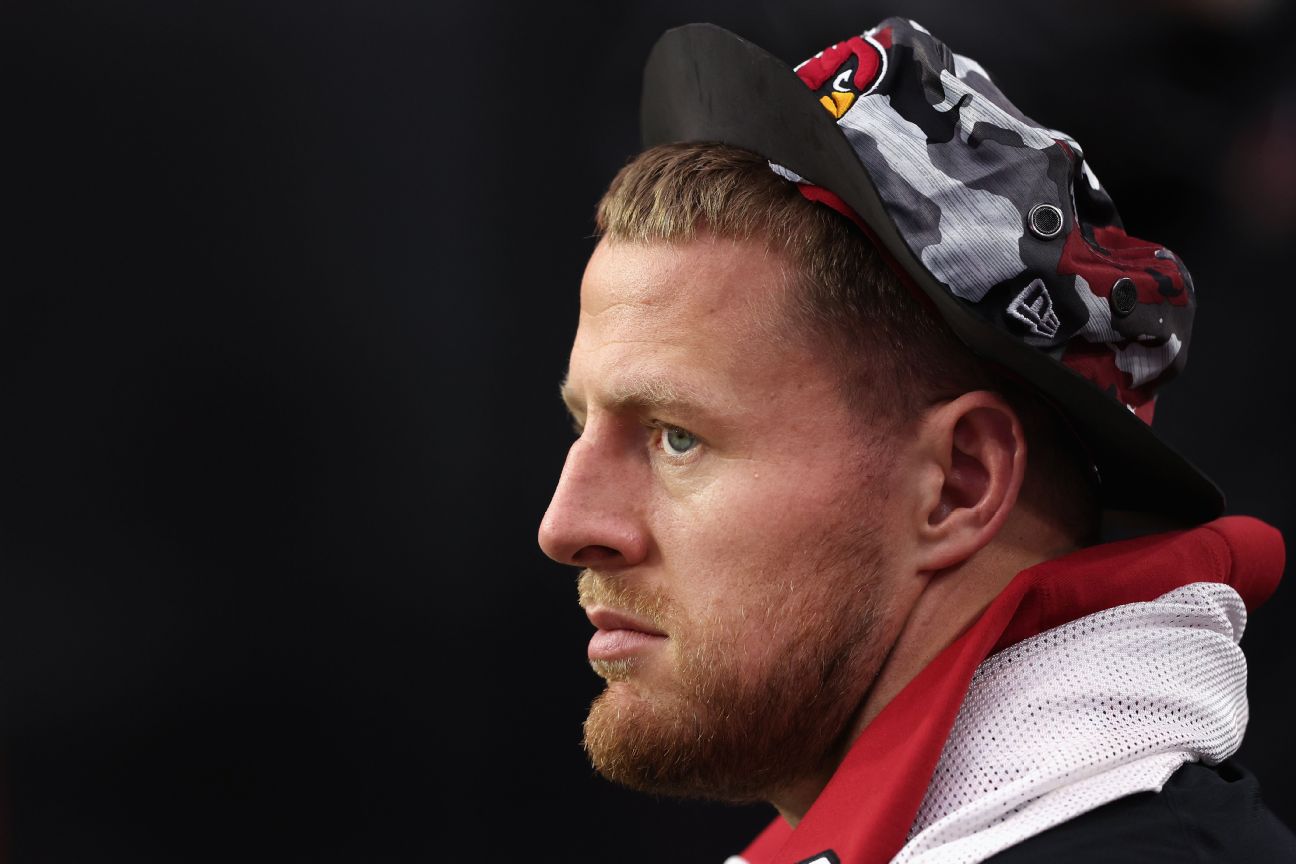 TEMPE, Ariz. — Arizona Cardinals defensive lineman JJ Watt wasn’t sure he was going to tell the world he was retiring until he pressed “tweet” on Tuesday morning.

The future first-ballot Hall of Famer had known for a while that this was going to be his last season, Watt said during a news conference Wednesday that lasted more than 16 minutes. He had been telling people around the Cardinals’ building for “a long time” but said he didn’t think many believed him. And for those who did, they tried to talk him out of it.

After seeing photos of his wife, Kealia, and his 2-month-old son, Koa, on the field with him after Sunday night’s game, Watt said he knew it’d be the perfect time to announce he was walking away after 12 seasons .

“I’ve been very fortunate. I’ve been extremely fortunate,” Watt said. “I’ve been playing this game since I was 10 years old, and it’s been an unbelievable ride. And if you told me back then when I started that I’d be able to play 12 years in the National Football League and meet the people I’ve met and accomplished some of the things I’ve accomplished and lived the life that I live, I’d have been extremely thankful and probably would’ve told you you were a crazy motherf—er.”

Ultimately, Watt said he believed this season was the right time to retire.

Watt cited the birth of his first child as one of the factors that contributed to his decision. So, too, was Watt’s episode with atrial fibrillation that caused him to have the rhythm of his own heart reset in late September.

There was a sense of appreciation for Watt during Wednesday’s walk-through practice, Kingsbury said, “for the time we’ve got to spend with him and watch what he’s about, how he works [and] just the relentless pursuit of excellence each and every day that he shows up to this building.”

Watt added that he is “very” at peace with retiring.

“I put so much into the game,” he said. “The wins, the losses, the mental stress and passion that comes with it. It just weighs on you. It’s heavy. I mean, it’s really heavy. Losses are very tough to take. You live with the highs and the lows. And I’ve always said that I would way rather live with the highs and the lows than never know the middle.”

Watt will retire without a Super Bowl ring, a fact that used to weigh on him.

“That’s definitely something that I’ve wrestled with in trying to put perspective on my career because there’s certainly a huge part of me that is always going to be sad, disappointed and frustrated that I could never get a championship,” Watt said. “That was heavy on me for a very long time.”

He eventually changed his outlook on his career.

“Then I also was given perspective at one point to say, ‘Look back and think about if you were a child, what you accomplished and if you’d be proud of it, and if you’d be thankful for it,'” Watts said. “And that’s why I say I’m walking away with nothing but love and gratitude. Did I win a championship? No. But I literally lived out a dream that millions of people would kill for. I have a job that anybody would love. I literally get to do things that I never in my wildest dreams thought I could do. So I may not have a trophy, but I’m doing all right, and I’m extremely thankful.”

Watt said he doesn’t know what’s next after this season but that he won’t regret retiring while he’s still playing good football. Having “some good film” to show Koa at some point helped Watt to accept that reality.

He wants to spend more time with his wife and son, but he doesn’t know if they’ll stay in Arizona or move back to Wisconsin or Houston. Watt hasn’t gone through all the messages on his phone, but he was sure that a network had reached out to him about being an analyst.

“I’m young,” Watt said. “I don’t want that to get lost. I’m 33 years old. I feel like I’m young. I have a whole life in front of me and I feel great. My body feels great. I’m really just looking forward to the future, whatever that may be.”

Quarterback Colt McCoy said he found out about Watt’s pending retirement while they were eating breakfast Wednesday morning. The catch: Watt said McCoy knew for a while and that “Wednesday breakfast” might have happened months ago.

“I told Colt a long time ago,” Watt said. “That’s a Texas good boy right there.”

After announcing his retirement, Watt put his phone down. He knew what was coming next.

After he and his wife took their son to the pediatrician, Watt checked his phone to see how things were going. A number that he didn’t recognize attempted to FaceTime him, but Watt ignored it. Then came an incoherent voice memo texted from the same number.

Finally, a selfie of rookie linebacker Jesse Luketa appeared with his cheeks stuffed full of cotton after having his wisdom teeth removed.

Right after Luketa woke up from the anesthesia, he was told that Watt had retired. His first instinct was to FaceTime the three-time NFL defensive player of the year. When that didn’t work, Luketa, still under the influence of the sedative, sent a voice memo saying: “I just heard you’re retiring. All I want is a jersey at the end of the season.”

Four hours later, Luketa texted Watt to apologize — but still ask for the jersey — and all Watt could do was laugh.