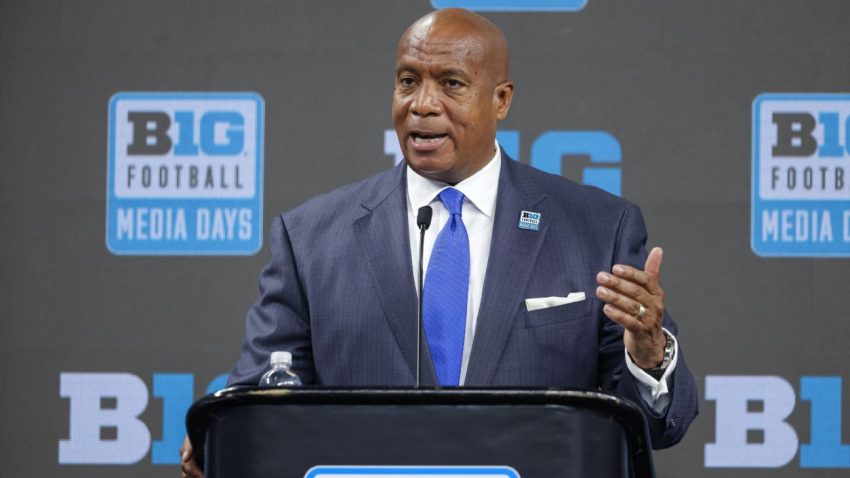 Big Ten commissioner Kevin Warren has emerged as a strong candidate to be the next president of the Chicago Bears, sources told ESPN on Thursday.

Warren is one of the final candidates in the Bears’ search for the team’s next president/CEO and remains engaged after a lengthy search, with sources telling ESPN that he’s a serious-enough candidate that he interviewed in person.

Warren’s experience as an executive with the Minnesota Vikings, including as the franchise’s chief operating officer, has been appealing to the Bears, sources told ESPN. He played a role in helping the Vikings build US Bank Stadium. That’s a task that the Bears are approaching in the coming years on 326 acres purchased by the team in Arlington Heights.

It’s unknown who Warren has informed of his Bears candidacy, but sources said it’s not something that’s been widely circulated. The timeline of the search is expected to finish up in the coming weeks.

Multiple calls to Warren and Big Ten vice president for communications Jon Schwartz were not returned.

It’s unusual for a sitting commissioner of a Power 5 conference to interview for a professional sports job and stay engaged in a process this long, which sources said is indicative of Warren’s interest level. He’s worked in the NFL as both an agent and a team executive. When he left the NFL, Warren was the highest-ranking NFL executive working on the business side for a team.

Warren’s tenure with the Big Ten has been uneven. He started slowly, drawing sharp criticism for his handling of the conference in 2020 during the COVID-19 pandemic.

Since then, Warren has led the Big Ten with the additions of USC and UCLA and helped shepherd a record-setting television deal in recent months that’s been valued at more than $7 billion.

Warren has publicly pushed for more expansion for the Big Ten, but that has been met internally with resistance. And for the near future, the Big Ten will be a 16-team league that stretches from New Jersey to Los Angeles.

Warren began with the Big Ten in June 2019, becoming the first African American commissioner of a Power 5 conference. He has not been given a contract extension since coming aboard, and the length of his deal and any talks of an upcoming deal have not been discussed publicly by the league.

His candidacy for the Bears job comes at a time where the Big Ten has a pair of teams — No. 2 Michigan and No. 4 Ohio State — in the College Football Playoff. Warren is not scheduled to attend either game, which is unusual for a commissioner.

The Bears search for a new president/CEO has been drawn out since late summer, sources told ESPN. The search, which has been run by Nolan Partners, did a round of Zoom meetings with a host of initial candidates months ago — with Warren being a top candidate among the final group. There’s been multiple in-person interviews, including with Warren, in recent weeks.

Warren has 21 years of NFL experience, according to his bio. That includes jobs with the Rams and Lions before spending 15 seasons with the Vikings.

The Bears’ search is to replace Ted Phillips, who announced his retirement and has served in that role since 1999.