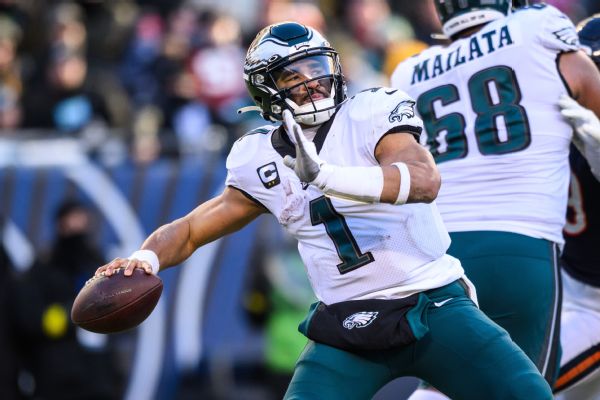 PHILADELPHIA — Eagles quarterback Jalen Hurts took part in practice Thursday — the first time he has been seen on the field since injuring his throwing shoulder against the Chicago Bears on Dec. 18.

Hurts participated in individual drills during the portion of practice open to the media, throwing a number of short and intermediate passes with decent velocity.

The 13-2 Eagles host the 6-9 New Orleans Saints on Sunday. Philadelphia can clinch the No. 1 seed in the NFC playoffs with a win.

“We’ll continue to see how he progresses throughout the week,” coach Nick Sirianni said Wednesday. “Does he have a chance? Of course he does because his body just knows how to heal. He’s a freak. We’ll see what happens as the week progresses.”

Hurts sat out of a ball-security drill in which coaches swing pads and boxing gloves at players as they run by. The other quarterbacks, Gardner Minshew and Ian Book, went through that drill.

According to ESPN’s Adam Schefter, Hurts is recovering from what doctors are calling an SC joint sprain in his throwing shoulder — an injury to the joint where the collarbone meets the breastbone.

He missed the 40-34 loss Saturday to the Dallas Cowboys. Minshew got the start, going 24-of-40 for 355 yards with two touchdowns and two interceptions.