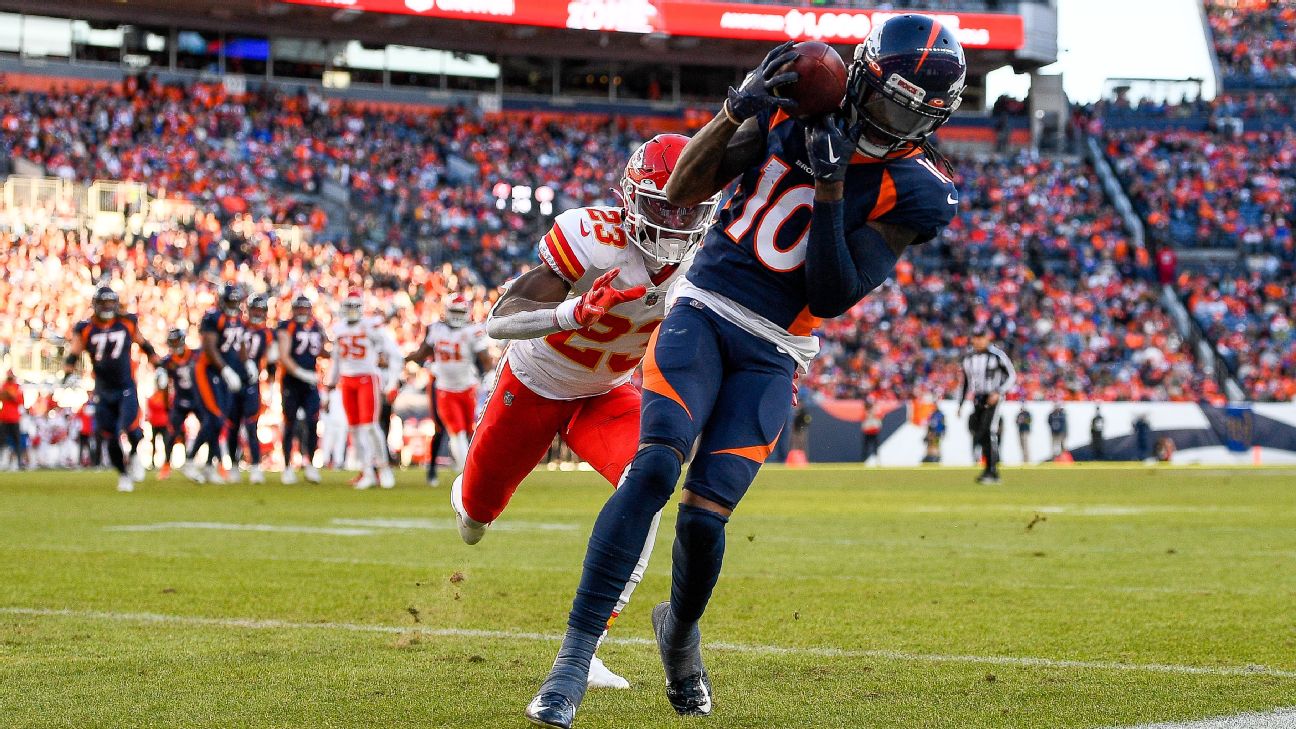 ENGLEWOOD, Colo. — With their seventh consecutive playoff miss already assured and coach Nathaniel Hackett already fired, Denver Broncos quarterback Russell Wilson’s play has become a flashpoint for criticism from both near and far.

Hackett was fired Monday, just hours after the Broncos fell to 4-11 with a 51-14 loss to the Los Angeles Rams at SoFi Stadium on Christmas Day. Wilson, who is on track for his career low in touchdown passes — he has 12 in his 13 starts — has taken the brunt of the public criticism as the Broncos have the lowest-scoring offense in the league (15.5 points per game) .

Jeudy tweeted that, “I never had a teammate who motivates me more” than Wilson, while Hamler tweeted that “3 (Wilson’s number) goes above and beyond to do whatever it takes to win for the team.”

Jeudy expounded on his defense of Wilson after Thursday’s practice.

“The media (is) trying to make it seem like something it ain’t, y’all don’t know what’s going on in the locker room,” Jeudy said. “… I’m just tired of reading things about my boy, making it seem like ‘oh he’s not a good teammate’ … unnecessary stuff that’s not true.”

Wilson, who signed a five-year, $225 million contract extension in September, has spent much of the season answering a variety of criticisms about his play, most of which he has simply called “noise.” General manager George Paton and owner and CEO Greg Penner were asked this week after Hackett was fired if Wilson’s play was a factor in the decision. The team’s trip to London in October featured some of the most intense rounds of criticism as well.

With each passing loss and each game in which Wilson has looked unsettled and out of sync, discussions about how much Wilson can, and is willing to, repair his game in the coming offseason have become a front-burner issue.

“I just wanted to get it out in the air that he is a good teammate and that he is a hardworking teammate and I just feel like I need to get that out there because there’s a lot of false narratives going around here that I’m getting tired of,” Jeudy said.

Guard Dalton Risner has called some of the discussions about all things Wilson “kind of crazy, I just don’t know where some of the stuff comes from.” Other high-profile Broncos, including safety Justin Simmons and wide receiver Courtland Sutton — both captains — have spoken strongly in Wilson’s favor in recent weeks.

On Wednesday, Wilson acknowledged the season has fallen far below the team’s, as well as his own, expectations. Wilson said he wished “I could have played better for (Hackett)” and pledged to repair the issues that have plagued his play this season.

“Tough year in a lot of ways, just physically … used to scoring a lot of touchdowns, winning a lot of games and that hasn’t happened, first time it’s been like this,” Wilson said. “… My expectations are higher than everybody else’s … my mission is still the same — bring Super Bowls to Denver.”