NASHVILLE, Tenn. — The Dallas Cowboys kept the pressure on the Philadelphia Eagles in the race for the NFC East crown by taking care of business against a banged up Tennessee Titans squad on Thursday night on the road.

Dallas (12-4) was able to overcome three first-half turnovers by quarterback Dak Prescott before knocking off the Titans (7-9) and quarterback Joshua Dobbs — who was making his first NFL start — 27-13.

The Eagles (13-2) can still clinch the division with a win over the New Orleans Saints on Sunday, but with a loss, the pressure will be on heading into the final week of the regular season.

The good news: The Cowboys beat the Titans. The bad news: They looked bad doing so.

The Cowboys have said they want to build momentum going into the playoffs, regardless of where they stood in the chase to win the NFC East. Thursday did nothing to inspire confidence that a long playoff run will be starting in the near future.

The only thing that prevented this from being a disheartening loss: The Titans rested running back Derrick Henry and other key players, started Dobbs at quarterback and had more than 100 yards in penalties with their eyes on a winner-take-all Week 18 matchup against the Jacksonville Jaguars.

A performance like this in the playoffs would most likely end the Cowboys’ Super Bowl hopes.

QB breakdown: It’s been said countless times that not all of the interceptions are on Prescott. Thursday was a perfect example. The first interception bounced off Peyton Hendershot’s hands. The second was right to safety Kevin Byard as the Cowboys were looking to put up points late in the first half. Prescott finished the game 29 for 41 passing for 282 yards, two touchdowns and two interceptions. 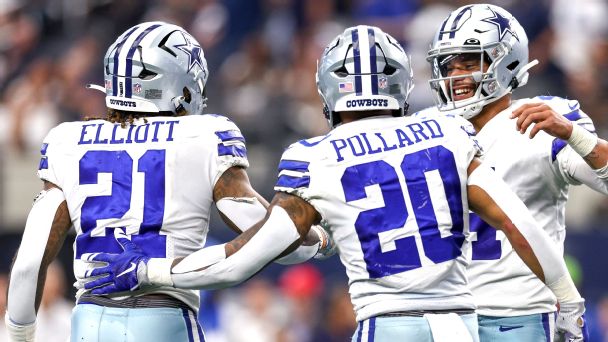 Prescott now has a career-high 14 interceptions this season, which is tied for the lead in the NFL with Las Vegas’ Derek Carr. He had 13 in 2017, his second season as the Cowboys’ starter, when he started all 16 games. It is the fifth game in which Prescott has had multiple interceptions, which is tied with Buffalo’s Josh Allen for most in the NFL. Imagine the total if Prescott did not miss five games with a fractured right thumb.

Troubling trend: The Cowboys are giving up too many explosive pass plays. The Philadelphia Eagles had seven pass plays of at least 20 yards last week. The Titans had four. And it’s not like the Titans have an offense that would be called explosive, even if Ryan Tannehill was starting at quarterback. Three of the completions were for more than 30 yards. The four explosives tied for the third-most the Titans have had this season. They had seven in the season opener against the New York Giants and five against the Green Bay Packers on Nov. 17.

Bold prediction for next week: Will Grier will start at quarterback against the Washington Commanders in Week 18. Why? The Eagles will beat the Saints to clinch the division and homefield advantage, so the Cowboys will be locked into the No. 5 seed and will travel to play the winner of the NFC South. The Cowboys can get a look at Grier as they wonder about what to do with the backup spot in 2023 with Cooper Rush set to be a free agent in March.

Under-the-radar stat that matters: Running back Ezekiel Elliott now has nine consecutive games with a rushing touchdown. That streak is second all-time in Cowboys history within a season. Emmitt Smith won 11 straight games in 1995. — Todd Archer

Next game: at Washington Commanders (Jan. 8).

The Titans elected two remaining starters against the Cowboys and the expected results followed.

The nine losses are the most by the Titans in five years under coach Mike Vrabel.

Tennessee clearly had its sights set on next week’s matchup with the Jacksonville Jaguars for the AFC South title, which remains intact regardless of this week’s outcome.

Despite all of that, the Titans may have stumbled upon a spark with Dobbs in place of rookie Malik Willis.

Describe the game in two words: Short staffed. The Titans entered the game with six starters ruled out — including four on defense. That’s in addition to the nine starters Tennessee has on injured reserve.

QB Breakdown: Dobbs showed some promise in his first start after shaking off some inaccuracies early in the game to go 20 of 39 passing for 232 yards, one interception and a touchdown. His throw to Robert Woods on third-and-8 in the first quarter was a little high, but the veteran receiver needed to make the play. Dobbs bounced back and found Racey McMath for a 39-yard gain on a seam route on the next series. The best pass came on a 9-yard completion to Woods where he ripped a well-placed pass from the opposite hash mark on an out-breaking route.

There were a couple of times that Dobbs held onto the ball too long — resulting in a couple of sacks. But overall, Dobbs showed decisiveness and knew where he needed to go with the ball. He did try to force one to Woods along the sideline that got intercepted by Nahshon Wright late in the game.

Promising trend: The defense found a way to force turnovers against the Cowboys. Kevin Byard led the way with two interceptions, one of which came on a play where he swooped in on a pass intended for tight end Dalton Schultz along the sideline to pick it off and return it 28 yards. Defensive lineman Teair Tart also joined the party with a fumble recovery.

Pivotal play: Dallas was up 10-6 early in the third quarter and was facing a third-and-19, but Prescott managed to escape pressure and give the Cowboys a chance. Prescott scrambled to his left and launched a pass 51 yards to Michael Gallup. The pass fell incomplete, but Titans cornerback Tre Avery was called for pass interference, giving Dallas the ball at Tennessee’s 6-yard line. Instead of being forced to punt, Prescott found Schultz for one of his two touchdown catches on a play-action pass for the 6-yard score.

Under the radar stat that matters: The Titans’ 124 penalty yards were their most in a game since Week 8 of last season where they had 161, and their 51-yard pass interference penalty was the costliest penalty in terms of yards in the NFL this season. — Turron Davenport

Next game: at Jacksonville Jaguars (Jan. 8).