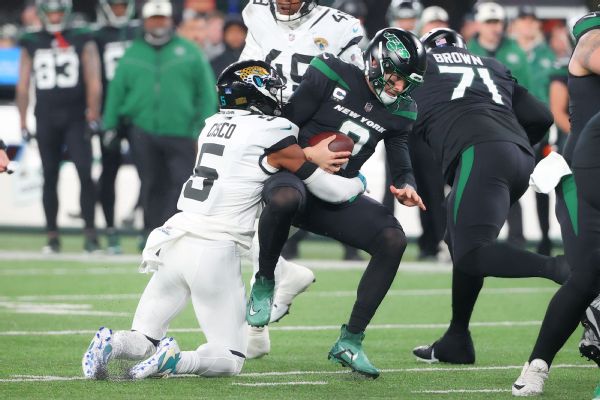 FLORHAM PARK, NJ — If a result breaks right, the New York Jets will take the field Sunday in control of their playoff destiny. That would be a pretty big deal for a franchise that has missed the postseason 11 straight years, but coach Robert Saleh said that isn’t the primary motivation.

“Like I’ve said all week, it’s not about the playoffs. It’s about getting up off the mat,” Saleh said Friday. “We had a rough December. Luckily, we get a new month. We take a deep breath, get off the mat and get ready to fight.”

The Jets (7-8) went 0-4 in December, but their fading playoff hopes were revived last weekend. They caught a few breaks with other outcomes, raising the stakes for Sunday’s game against the Seattle Seahawks at Lumen Field.

If the Miami Dolphins defeat the New England Patriots in a 1 pm ET kickoff, the Jets would earn a wild card by beating the Seahawks and the Dolphins in Week 18.

The Jets haven’t been in this position since 2015, when they went into the final game needing a win to secure a wild-card berth. Favored by three points on the road, they lost to the Buffalo Bills and coach Rex Ryan 22-17.

Saleh said he won’t be scoreboard watching Sunday afternoon but suspects he will know the outcome of the Dolphins-Patriots game.

“Unless we take care of ours,” he said, “it doesn’t matter.”

Pro Bowl linebacker CJ Mosley said, “There’s pretty much no tomorrow if we don’t come back with a victory.”

That’s true. The Jets would be eliminated with a loss, which would make it the longest playoff drought in franchise history. It’s already the NFL’s longest active slump.

The Jets are approaching this week as if they have a second life. According to ESPN Analytics, their playoff chances dropped to 5% after their loss to the Jacksonville Jaguars on Dec. 22. But on Sunday, the Patriots and Dolphins both lost.

“[It] almost felt like a sign, a second chance almost, maybe a little extra life breathing in the locker room,” said quarterback Mike White, who returns to the lineup after missing two games with fractured ribs.

The Jets were one of the biggest surprises in the league, jumping to 6-3 after upsetting the Bills at home in early November. Since then, they have dropped five of their past six games. The biggest reason is the offence, which has gone cold. The Jets haven’t scored more than 22 points in those five losses, mainly because of a dormant rushing attack and inconsistent quarterback play.

Saleh, perhaps trying to control expectations, focused on the positives.

“We’ve made really, really nice strides this year,” he said. “We’d love to finish it. Obviously, we have to take care of this one. We definitely feel like we’re going in the right direction.”