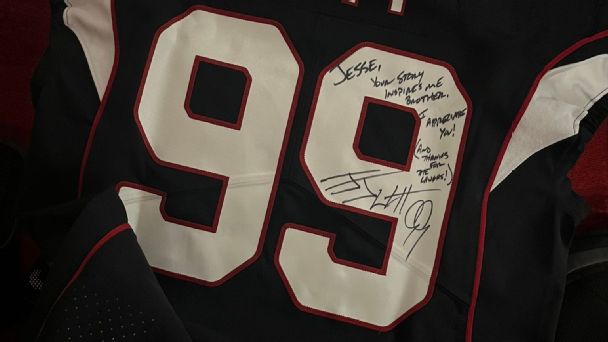 TEMPE, Ariz. — Jesse Luketa got what he wanted.

The Arizona Cardinals rookie linebacker woke up from getting his wisdom teeth taken out on Tuesday, shortly after JJ Watt announced his plan to retire after the season. So Luketa sent him an anesthesia-induced voice memo.

“JJ, JJ,” started Luketa, whose mouth was full of cotton after his surgery. “At the end of the season I need a signed jersey, JJ That’s all I wanted to call and tell you. That’s all. Bye, JJ”

Watt thought it was hilarious.

What made it funnier, though, is that Watt didn’t have Luketa’s number. Luketa, a seventh-round draft pick out of Penn State, then tried to FaceTime the three-time NFL Defensive Player of the Year but, not knowing who it was, Watt didn’t pick up. Then Luketa sent the voice memo followed by a selfie.

Four hours later, Luketa texted Watt to apologize — but still asked for the jersey — and all Watt could do was laugh. On Wednesday, Watt said Luketa would get the jersey.

On the right 9 of Watt’s black No. 99 jersey, he wrote, “Jesse, your story inspires me brother. I appreciate you! (And thanks for the laughs!)”