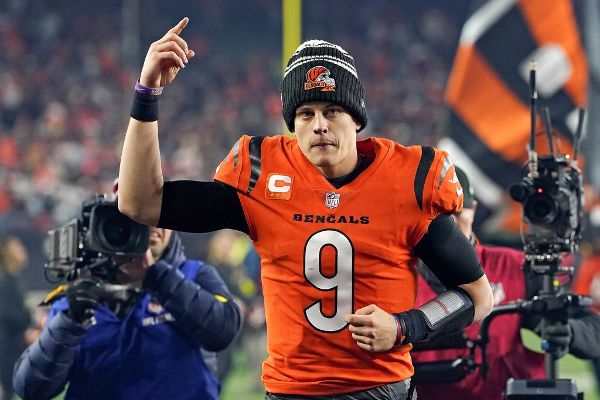 CINCINNATI — No extra hype is necessary for the upcoming matchup between the Buffalo Bills and Cincinnati Bengals on Monday Night Football.

The two teams are among the best in the NFL and are vying for the conference’s No. 1 playoff seed, which would mean home-field advantage throughout the postseason. In previous years, this might have been a good measuring stick for the Bengals.

But after the wave of success the last two seasons, Cincinnati is well aware of its status.

“We’ve beaten everybody,” Bengals quarterback Joe Burrow said. “We know we can play against everybody. We’ve done it in the biggest of moments. Like I said, we’re treating every game the same. We’ve played everybody the last two years.”

“We hadn’t played the upper echelon of the AFC at that point,” Burrow said. “So that was a big win for us.”

However, Burrow noted that Buffalo (12-3) is one of the teams Cincinnati (11-4) has yet to face since the Bengals morphed into Super Bowl contenders. The last time Cincinnati faced Buffalo was in Week 2 of the 2019 season, which was at the beginning of a downturn that led to the Bengals having the league’s worst record. That presented them with the opportunity to select Burrow with the first overall pick in the 2020 draft.

Cincinnati enters Monday’s game as one of the NFL’s hottest teams. Its seven-game winning streak is the longest in the AFC and is one shy of a franchise record.

Burrow and Bills quarterback Josh Allen have combined for 78 passing and rushing touchdowns, tying the NFL record for the highest total by two opposing quarterbacks entering a game, according to research by ESPN Stats & Information.

Cincinnati wide receiver Ja’Marr Chase and Bills wide receiver Stefon Diggs both rank in the top six in touchdowns and receiving yards over the past two seasons. Chase called Monday’s game a meeting of the “best of the best” that will highlight a team’s quality.

“This is what the NFL is for — the best of the best to play and give the fans what they want on. Put on a show for the whole world to see,” Chase said.

Cincinnati’s offense will be going up against a Bills secondary that Higgins believes is one of the best in the NFL. The Bengals are expected to have starting tight end Hayden Hurst back, coach Zac Taylor said. Hurst, who has missed the past three games with a right calf injury, was a full participant at Thursday’s practice, according to the team’s injury report.

During his weekly news conference, Burrow was asked about preseason chatter that had the Bills as the hot pick to reach the Super Bowl. Caesars Sportsbook received twice as much money on Buffalo to win the Lombardi Trophy than any other team in the league, including Cincinnati, last year’s runner-up.

But then and now, Burrow carried minimal concern for how the Bengals stacked up against the NFL’s best.