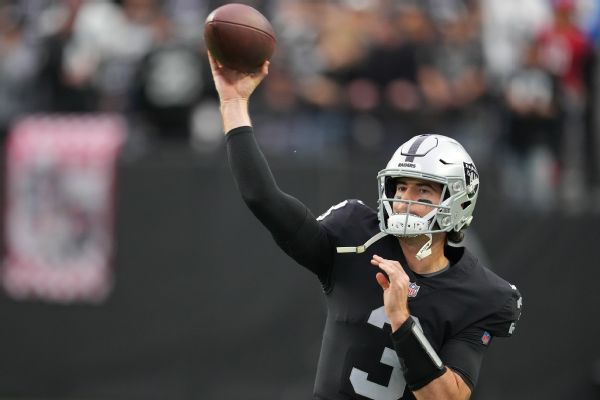 HENDERSON, Nev. — Newly installed Las Vegas Raiders starting quarterback Jarrett Stidham will be making his first career NFL start on Sunday but said he has been preparing for this moment since entering the league in 2019.

Stidham, a fourth-round pick of the New England Patriots, has backed up Tom Brady, Cam Newton, Mac Jones and Derek Carr, and has appeared in 11 games in his career. He will take over for Carr, who he said has given him a vote of confidence.

“You dream of playing in the NFL as a kid,” said Stidham. “And to start a game in the NFL, it’s a dream come true. But at the same time … I’ve tried to prepare the same every single week.

“Obviously, I’ve gotten to learn under a bunch of really good guys, players, coaches. So, I’ve always tried to treat the weeks the same, and it’s no different this week.”

Sunday at Allegiant Stadium, though, Stidham will face the NFL’s No. 1-ranked defense in the San Francisco 49ers.

“Yeah, it’s a great challenge,” he said. “I’m a firm believer in whatever it is in life that you do, you’re not going to get any better unless you do it against the best. … It’s going to be a lot of fun. I’m super excited about it, and I think would be a great challenge for us. I know we’re looking forward to it.”

Stidham was acquired, along with a 2023 seventh-round draft pick, by the Raiders’ new regime of coach Josh McDaniels and general manager Dave Ziegler for a 2023 sixth-round pick in a May 13 trade with the Patriots.

As such, the only offensive system Stidham has known as a pro is McDaniels’ scheme, and it showed in OTAs, said tight end Darren Waller.

Still, there was a stunned Raiders locker room with Carr being benched and leaving the team in a mutual decision for the final two weeks of the season. Carr has been the team’s starter since his rookie season in 2014, missing only two games while going 63-79 without a playoff victory.

“It’s a reaction where you’ve got to kind of take emotions out of it and just realize that the only thing that can be productive is to support Jarrett going forward and guys are excited about him being able to get an opportunity,” Waller said . “So, we’re rallying around him, letting him know we believe in him and just try to do what we can to prepare for San Francisco.

“Naturally it’s tough, but I believe two things can co-exist — believing in Derek and believing he can always get it done, but also supporting Jarrett and moving forward with this week and preparing.”

Stidham started all four of the Raiders’ preseason games and completed 63% of his passes for 316 yards.

He also appeared in relief in three regular-season games, completing 8 of 17 passes for 72 yards in the Raiders’ 24-0 loss at the New Orleans Saints in Week 8.

Stidham said Carr had helped him both “personally and professionally” since joining the Raiders.

“I can’t thank him enough for everything,” Stidham said. “Him and his wife both have been very supportive and very welcoming to me and my wife here in our time together. So, I can’t speak highly enough of Derek. I mean, he’s just a great human being and obviously a great football player, too. He’s obviously been here for a long time. … So I’m just going to try and go out there and play the best that I can.

“I mean, obviously, I’ll keep most of it private between me and him, but the biggest thing — and this is what I always appreciated a lot about Derek — was to always stay even, never get too high and never get too low. Football is an imperfect sport, and you try to do, obviously, the best you can. You prepare hard each and every week, but to always just stay even.”