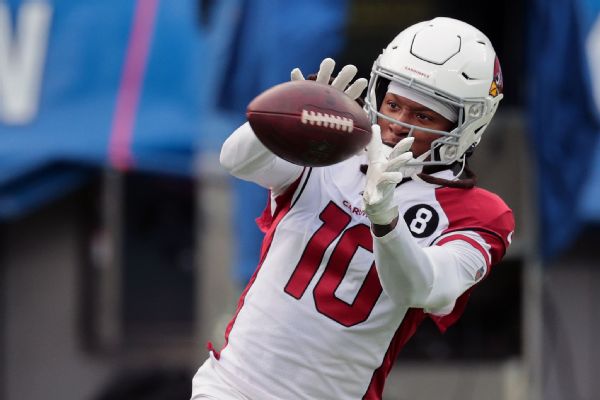 The Arizona Cardinals on Saturday ruled out receiver DeAndre Hopkins for Sunday’s game against the Atlanta Falcons.

Hopkins left Friday’s practice before the open portion was over with what coach Kliff Kingsbury called a “little bit of a knee issue” and was listed as questionable before being downgraded Saturday.

Hopkins, one of the top targets for the struggling 4-11 Cardinals, has caught 64 passes for 717 yards and three touchdowns this season.

In addition, the Cardinals are turning to David Blough at quarterback for Sunday’s game after deciding to sit Colt McCoy, who experienced additional concussion symptoms following Thursday’s practice. McCoy missed Sunday’s loss to the Tampa Bay Buccaneers and was replaced by Trace McSorley, but Kingsbury said he wanted to evaluate Blough before potentially choosing between McSorley and Blough for the season finale against the San Francisco 49ers.