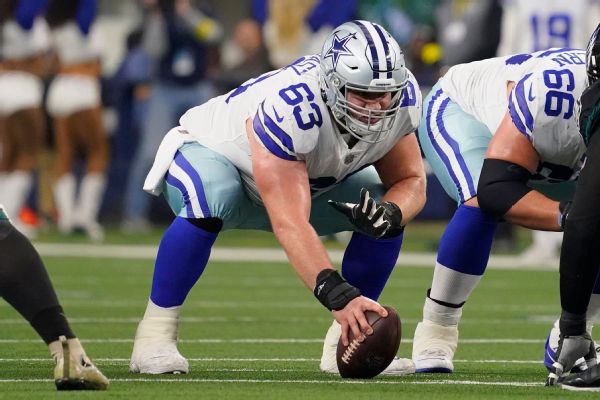 Biadasz suffered a high right ankle sprain when he was rolled up on the final play of the third quarter and will miss next week’s regular-season finale against the Washington Commanders, according to a source, but could be ready to go for the wild-card round of the playoffs.

“It’s better than we anticipated,” coach Mike McCarthy said, adding he did not have a set time frame for Biadasz’s return. Biadasz will begin rehab on Saturday after undergoing an MRI on Friday.

His absence led to a three-player shuffle on the offensive line against the Titans. Connor McGovern moved to center from left guard, rookie Tyler Smith moved from left tackle to left guard and veteran Jason Peters moved to left tackle.

Three weeks ago, the Cowboys had to alter their line when right tackle Terence Steele suffered tears in his anterior cruciate and medial collateral ligaments in his right knee, but they had veteran Pro Bowler Tyron Smith, who was returning from a torn hamstring, ready to play right tackle.

“We’ve been working all these different combinations for a reason, so that’s the realm we’re in,” McCarthy said. “We’re not in the just playing with five and that’s been our challenge. So I think the way we ended the game worked out well for us, so that’s definitely what we’ll look at as the starting point, but we got to make sure we got eight offensive linemen ready to go for Washington.”

McGovern played a handful of snaps at center earlier this season. He last played the position full-time in 2017 at Penn State. He said his first issue Thursday was making sure his right hand was dry to help with the exchanges. During the practice week, he gets a few snaps with Dak Prescott.

“Felt like getting on a bike again,” McGovern said.

McCarthy had not reviewed the game before a conference call with reporters but felt in-game there were no issues with the snaps or calling of the defensive fronts.

Peters, 40, has not played more than 27 snaps in a game this season, but McCarthy is not worried about having to use the veteran on a full-time basis at tackle.

“I think he’s ready to go a full game,” McCarthy said of Peters, who joined the roster not long after Tyron Smith suffered his injury during training camp. “I think just the way he’s come in here and we’ve been very conscientious about workload capacity and workload even during the course of the practice week. And Jason, he’s an old-school pro. He’s downstairs right now. So he puts in a lot of extra time. He knows what it takes to get ready. And it’s that time of year too.”