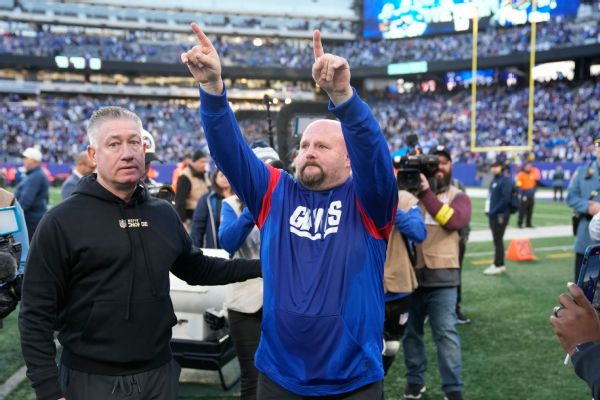 EAST RUTHERFORD, NJ — The New York Giants wouldn’t disclose on Monday how they’re going to handle the regular-season finale with the Philadelphia Eagles at Lincoln Financial Field. It’s an important game for the Eagles.

The Giants (9-6-1) are locked in as the sixth seed in the NFC playoffs after clinching their postseason spot with a rout of the Indianapolis Colts on Sunday. The Eagles will be playing for much more than pride: The No. 1 seed and a bye in the first round of the playoffs are on the line. Philadelphia would clinch the top seed in the NFC with a win.

It could depend on whether Giants coach Brian Daboll rests some of his starters in Philadelphia.

“We’ll talk about it and do what is best for the team,” he said. “It’s early Monday. Go out there and try to have a good week of practice and prepare as we normally do. Decide what we want to do relative to who is playing, who is not playing. Whatever we think is best for our team, that is what we will end up doing.”

Daboll said he will talk with general manager Joe Schoen and his coaching staff throughout the week and formulate a plan. He seems to be setting the table to rest some or most of his top players for part or all of Sunday’s NFC East matchup.

At the top of that list is running back Saquon Barkley, who could benefit from a limited or nonexistent workload. No running back in the NFL has played more than the 821 snaps he’s logged this season while playing all 16 games. That’s 80.2% of the Giants’ offensive snaps.

“You make the decision that you think is right for your team,” he said. “You go out there and lay an egg, it’s the wrong decision. You win, it’s the right decision. So, that doesn’t affect it either way.”

It was only a few years ago that former Giants coach Joe Judge and many in the organization publicly expressed their disgust with the way the Eagles handled the regular-season finale against Washington. The Giants needed Philadelphia to win the Sunday night finale in 2020 in order to win the division and reach the playoffs.

Philadelphia, with Doug Pederson as the coach, inserted third-string quarterback Nate Sudfeld for Jalen Hurts in the fourth quarter and lost. The Commanders won the division ahead of New York.

The Giants’ complaint at the time centered on the Eagles’ lack of integrity in trying to win that game. Daboll isn’t concerned about that several years later.

“Well, I just try to consider what is best for our team,” he said. “That is what we’ll always consider.”

Daboll also stressed it’s a much different situation than in 2007, when Tom Coughlin and the Giants played everyone in the regular-season finale against the undefeated Patriots. That prompted Coughlin to receive a famous call from the legendary John Madden thanking him for doing the right thing.

The Giants lost that regular-season finale but credited the experience of keeping that game close as a key factor to them beating the Patriots in the Super Bowl later that season.

“I think every situation is different,” said Daboll, who has served as an assistant in New England. “That is a pretty unique circumstance that year, the record the Patriots had. And every year is different. So what happened in 2007 doesn’t really have any effect on what is happening in 2023 for the decisions we have to make. We’ I’ll do what’s best for the team.

“Again, every situation, every season … would they have done that if a team was 10-6? Who knows. I don’t really have the answer to that. We have to focus on what we need to do here in 2023.”