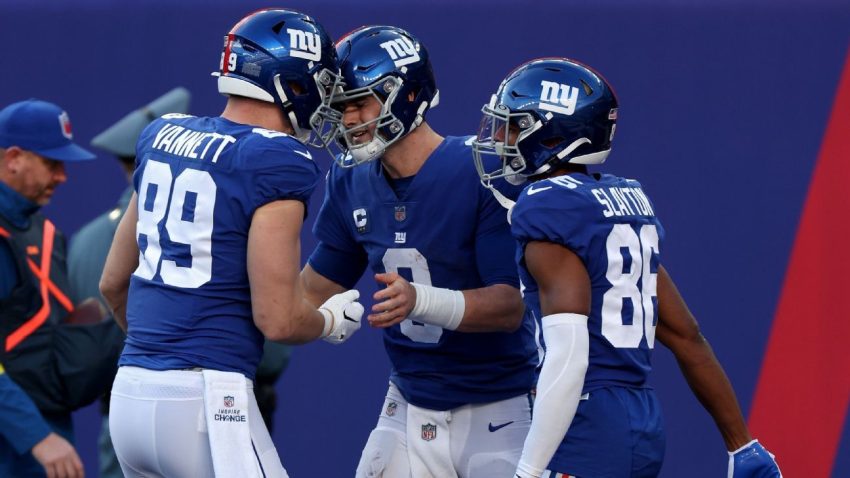 EAST RUTHERFORD, NJ — The New York Giants clinched their first postseason berth since 2016 with a 38-10 demolition of the Indianapolis Colts at MetLife Stadium on Sunday.

The celebratory scene included the home fans chanting the name of Daniel Jones, the quarterback receiving a standing ovation when he was taken out of the blowout and coach Brian Daboll getting drenched with a Gatorade bath. All of this in Daboll’s first year in charge with one week remaining in the regular season.

The Giants got back in the playoffs behind four touchdowns (two passing, two rushing) from Jones, who finished 19-of-24 passing for 177 yards and rushed for 91 yards on 11 carries in a dominant performance. He was pulled two plays into a mid-fourth-quarter drive, prompting a curtain call from a fan base that he has seemingly won over in his fourth professional season. And not a moment too late — just before he hits free agency.

Jones was mobbed by coaches and teammates, including Barkley, when he reached the sideline for the strange gesture that Daboll thought he deserved.

“That was a special moment,” Jones said after the game. “A lot of guys who put in a lot of work. We’ve been through, certainly, some tougher times and it feels good to be on this side of it, for sure. Special moment with those guys. Really proud of this team , proud of what we did today. Grateful to be a part of it.”

The Giants (9-6-1) only needed a win over the Colts to secure the sixth seed in the NFC playoffs, where they are likely to play either the San Francisco 49ers or Minnesota Vikings in the wild-card round. They clinched a winning season for just the second time in 10 years.

The last time the Giants reached the postseason, Ben McAdoo was the coach, Jerry Reese the general manager and Eli Manning the quarterback. Wide receiver Odell Beckham Jr. was in the midst of his third straight dominant season, which ended with a memorable boat trip and a Giants playoff loss to the Green Bay Packers.

Landon Collins was also an All-Pro safety that season. Collins, in his second stint with the Giants, is now a part-time linebacker. He had an interception return for a touchdown (his first since 2016) late in the first half against the Colts to make the score 21-3.

The Giants’ success this season comes in the first year with Daboll as coach and Joe Schoen the general manager. They were hired earlier this year from the Buffalo Bills and tasked with turning around the struggling, once-proud franchise.

Schoen and Daboll took over an organization that was tied entering this season with the New York Jets for the worst record in the NFL over the previous five years. The Giants went 4-13 last season.

Their goal was always to try to rebuild and compete on the fly. “Compete for today and build for tomorrow,” Schoen has said. That is exactly what they have done. The Giants came into the season with a projected win total of six, per Caesars Sportsbook. They bested that before Halloween, with Jones playing the best football of his career and Barkley resembling his rookie-year self.

“Let’s be honest, no one besides the men and women in that facility gave us a chance to accomplish this, said Barkley, who passed his career-best rushing total of 1,307 yards from his rookie season on Sunday. “We stuck to the script , kept believing in each other and gave us the opportunity. And we did it.”

Players such as Jones and Barkley have been through most of the tough times in recent years. This season marked the first time in their careers that they ever had a winning record, at any point of the season. This will be their first foray into the postseason. The same holds true for players such as Dexter Lawrence, Julian Love, Darius Slayton, Andrew Thomas and even Leonard Williams, who began his career with the Jets.

“It means a lot,” said Love, a captain and the team’s defensive playcaller. “You have [had] to learn and experience a lot of hard lessons the last few years here. I know I have. Just to get in this position, it means a lot. It’s hard not to be emotional about it.”

The Giants had lost at least 10 games in each of the previous five seasons. Barkley said after a recent win in Washington that got the Giants back on track following a rough stretch that reaching the playoffs “was the goal from the jump.”

Accomplishing that goal for this team was significant. It’s what got Daboll the Gatorade bath, which he followed with his trademark first pump that was shown, much to the delight of the packed house, on the stadium’s video board.

“It was sticky and wet,” Daboll said with a laugh. “It was good excitement, obviously. You work hard in this business to try to give yourself a chance to play extra innings or more games. So, we have done that. We put ourselves in a position to compete more than just one other game . So, excitement, sure. Definitely.”