LANDOVER, Md. — Almost a month ago, Cleveland Browns quarterback Deshaun Watson noted when things finally click for him again on the field, everyone would know it.

On Sunday, in a comeback victory over the Washington Commanders, they finally did.

After a moribund first half, Watson came alive in the second, leading the Browns on three straight scoring drives, capping each with a touchdown pass to propel Cleveland past the Commanders 24-10. 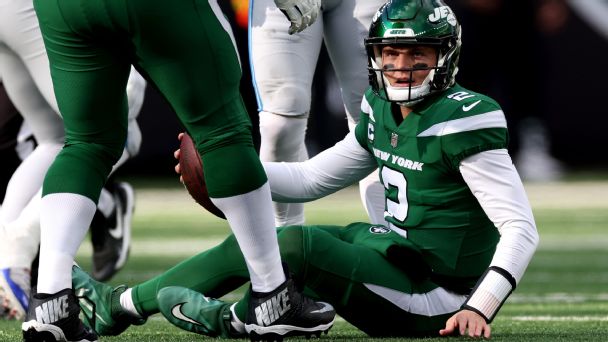 The Browns had already been eliminated from the AFC playoff race. But Watson called the New Year’s Day breakout performance an omen of what’s to come.

“A good day, especially to start 2023,” Watson said, “and what the future is going to hold for the Cleveland Browns.”

Initially, Sunday looked as if it would be more of the same for a Browns offense that had struggled since Watson’s return in Week 13 from an 11-game suspension. Watson was suspended for violating the NFL’s personal conduct policy by committing sexual assault, as defined by the NFL, on massage therapists.

In the first half in Washington, Watson completed 3 of 8 passes for 23 yards. He also took four sacks as the Commanders led 7-3. He was so out of sorts that at one point, he even tried to throw a pass to right tackle Jack Conklin, which resulted in a penalty.

“But he was great at halftime,” Brown’s coach Kevin Stefanski said. “He knew what we were capable of.”

In easily Cleveland’s best half since Watson’s Browns debut against the Houston Texans in Week 13 — and maybe the best half Cleveland has played overall since the 2021 Week 1 opener at Kansas City, when the Browns opened with three touchdown drives to take a double- digit lead over the Chiefs — Watson starred.

In one half, Cleveland scored as many offensive touchdowns (3) as it had in the previous four games combined.

“We just got in a rhythm,” Watson said of the second-half scoring barrage. “Instead of pressing. … we started controlling the game.”

On the first drive of the second half, Watson connected on an out route to Amari Cooper, who shook off his defender for a 46-yard touchdown down the sideline.

On Cleveland’s ensuing possession, Watson found Donovan Peoples-Jones wide open crossing the middle of the field on third-and-long for a 13-yard touchdown — one play after DPJ had dropped a pass.

Stefanski and Watson, among others, called that pass the key play in the game.

“Sometimes you don’t know if you will get the ball after [the drop],” Peoples-Jones said. “To know that he’s coming right back to me the next play shows that he is not worried about that. That really makes me feel good and makes me excited, too.”

Watson had the Browns feeling even better with a 33-yard touchdown strike to Cooper on the third drive of the half which effectively put the Commanders away.

Until Sunday, Watson’s improvement had been surprisingly limited, despite nearly two years without playing football. Before his Browns debut in early December, the last time Watson played, in 2020 with the Houston Texans, he led the NFL in passing yards.

But in his first four games with the Browns, Watson ranked last in the league in EPA (expected points) per dropback. His weekly QBR had only topped 32 (scale of 0-to-100) once (in Week 14 in Cincinnati).

“He’s getting back into playing football,” Stefanski said. “All of these games go a long way towards his progression.”

Watson took a big step forward with his progress against Washington. Showing signs of what the Browns could become in the new year.

“That was definitely the potential of what the future can hold,” Watson said. “That second half we were rolling on all cylinders. … Everything was just clicking.”