EAST RUTHERFORD, NJ — Gone with 2022 is the debate about whether Daniel Jones is good enough for the New York Giants.

That conversation, which began when he was drafted with the No. 6 overall pick out of Duke in 2019, officially ended on Jan. 1. Jones did what nobody saw coming. He led the Giants to the playoffs in a year when his No. 1 receiver was eighth on the depth chart during training camp. He did it by playing well from start to finish.

Jones accounted for four touchdowns Sunday (two rushing, two passing) in a 38-10 demolition of the Indianapolis Colts to end the Giants’ five-year playoff drought. It was the moment they’ve all been waiting for.

“We knew it all along,” owner John Mara said half-jokingly given everything that has unfolded since Jones was drafted.

The Giants are on their third head coach and fourth offensive coordinator since Jones was drafted. But this year, everything seems to have come together. Jones has been the Giants’ best player the second half of the season.

Although the Giants declined Jones’ fifth-year option earlier this year, this stretch likely assured Jones’ future with the franchise in some capacity for next season. His 65.2 QBR the past three weeks, when they needed it most, is sixth-best among all quarterbacks.

“I thought he earned it,” coach Brian Daboll said.

One of the first players to greet him on the sideline was running back Saquon Barkley, who was perhaps among the least surprised of all. He’s been adamant for several seasons that Jones is the guy.

“I mean, I feel like I’ve been saying it all year,” Barkley said. “He’s a heck of a player, heck of a quarterback. I think it really showed, not just [Sunday], but the whole season. And I’m just happy for him.

“Hearing his name getting chanted — it’s a beautiful thing, and you can finally see he’s starting to get the respect that he deserves. I know everyone wanted to be a big critic of him and say this and say that, but he gave us the opportunity to play playoff football and he locked it in [Sunday]. When we needed him most he came up and made big plays.”

It has been that way for weeks now.

This Giants’ new regime was always a fan of Jones. They liked his physical skills and makeup. But they still needed him to prove it on the field in order for them to want to commit to anything in the future. A team source said this summer they would have been open to an in-season extension or the franchise tag if he played well this year. The latter now realistically seems on the table.

The keys were Jones remaining healthy and eliminating the turnovers that plagued him early in his career. He had never made it through a season without missing a game due to injury. This year he’s played all 16 games.

He’s also disproven the narrative that the turnovers were uncontrollable. Not only has Jones cut down on the turnovers, he’s turned the ball over less than any other quarterback. Jones has thrown five interceptions and has three lost fumbles. 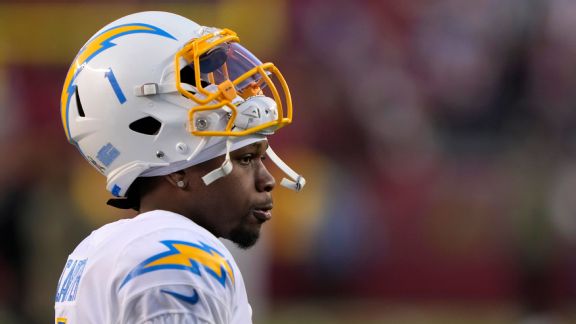 “It’s great,” Mara said just minutes before the Giants clinched their first playoff berth since 2016. “You draft him as high as we drafted him — got a lot of criticism; he took a lot of criticism. To see him coming into his own like this is very gratifying.”

The results suggest that Mara and co-owner Steve Tisch finally found the right combination. Getting offensive gurus like Daboll as the head coach and Mike Kafka as the offensive coordinator has done wonders for Jones.

They are finally putting him in positions to succeed, even with a compromised receiving corps and an offensive line whose strong suit isn’t pass protection. Daboll has even helped maximize Jones’ athleticism.

Jones has 708 yards and seven rushing touchdowns. The only quarterbacks with more rushing yards this season are Chicago’s Justin Fields, Philadelphia’s Jalen Hurts, Baltimore’s Lamar Jackson and Buffalo’s Josh Allen. That is elite company to keep.

“[Daboll’s] mean a lot. He’s meant a lot,” Jones said. “I’ve learned a lot from him. A lot of football. I’ve grown a lot as a player. I appreciate his support and giving me the chance to go out there and play. He’s helped me a lot, he’s helped all of us a lot. Definitely grateful for him.”

Sunday was just checking another box. Jones, with Daboll’s help, proved he can lead a team to the playoffs. He’s already shown he can play well consistently in big games down the stretch.

Now it’s just a matter of seeing how far this season will take them and figuring out a contractual solution in the offseason. But the way the entire organization feels about Jones was on full display during Sunday’s New Year’s party.

“I told him, ‘I love you,'” Barkley said of their sideline embrace. “I think that was a cool moment. Hearing his name be chanted, I know it’s been a tough couple years here … but it’s just cool to see he’s finally getting the respect that he earns because that guy, he works his tail off. I think I said it to one of you guys earlier, he’s the toughest quarterback in the league. He’ll do whatever it takes to help the team win football games. He comes to work every single day with that mentality and I’m just happy for him.”