What was a dog of a game on the afternoon of Nov. 6 that Ford Field has turned into the game of the final week of the regular season at Lambeau Field.

Imagine saying that after the Detroit Lions, with a 1-6 record entering that game two months ago, intercepted Aaron Rodgers three times yet only eked out a 15-9 win over the Green Bay Packers to send them home with a fifth straight loss and drop them to 3-6. 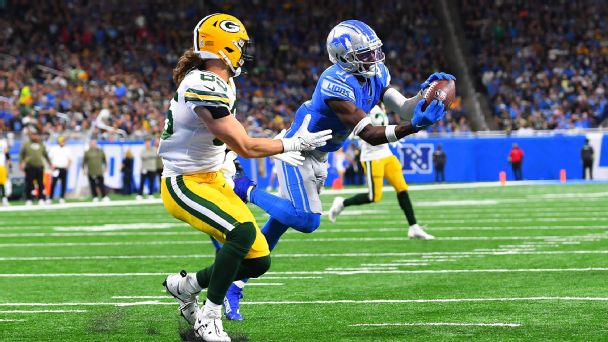 Now, these teams are the same in names only. They’re among the hottest teams in the NFL after both managed to pull their records even at 8-8.

For that reason, the NFL moved the rematch to prime time on Sunday night (8:20 pm ET, NBC) to close out Week 18.

It’s a win and get into the playoffs for the Packers. It could be the same for the Lions if the Seattle Seahawks (8-8) lose earlier on Sunday to the Los Angeles Rams. A Seahawks win would leave the Lions in position only to play spoiler by knocking out the Packers and giving Seattle the last wild-card spot.

Here’s a look at how this game went from an afterthought to a marquee matchup from ESPN Packers reporter Rob Demovsky and Lions reporter Eric Woodyard:

How did the Lions and Packers get here?

Very rarely does a team dig itself into a 1-6 hole at the start of a season, then climb back out to reach .500. But in Detroit, that’s exactly what happened. Even during those tough early losses, which were often close, the Lions remained consistent in their approach and learned from those moments to make better decisions in key situations.

It all starts with Campbell, who kept the same gritty demeanor, which rubbed off on his players and kept them playing hard. He made some defensive personnel tweaks, and the Lions traded away Pro Bowl tight end TJ Hockenson to get more players involved offensively. Quarterback Jared Goff also entered a hot streak, which he has called the best stretch of his career. Voila!

With all those things combined, it doesn’t seem like the same old Lions.

Demosky: If you ask Rodgers, it’s in large part because of two players: Christian Watson and Keisean Nixon.

Watson, the rookie receiver picked in the second round to help replace Davante Adams, was a nonfactor the first nine weeks of the season. Injuries and dropped passes set him back. Since Week 10, he has eight touchdowns (seven receiving and one rushing). According to Elias Sports Bureau research, he joined Randy Moss as the only rookie receivers in NFL history with eight scrimmage touchdowns over a four-game span (Weeks 10-13). When asked recently what has changed about the Packers’ offense other than Watson, Rodgers replied: “Christian.”

And then there’s Nixon, who didn’t take over as the Packers’ full-time kick returner until midseason but leads the NFL with five kickoff returns of 50-plus yards; no other player has more than two. Rodgers said for the first time in his career he noticed a team kicking away from a Packers returner, and that was before Nixon’s 105-yard kickoff return for a touchdown against the Vikings last week.

What was the turning point of the season?

Woodyard: After being shut out 29-0 at the New England Patriots in Week 5

If you ask defensive coordinator Aaron Glenn, that’s when the team drew a line because its play up to that point on defense was embarrassing. At 1-4, the Lions became the only team since the 1970 AFL-NFL Merger to lead the NFL in points per game and rank last in points per game allowed through the first four weeks of a season, according to Elias.

Detroit dropped the next two games after that loss, but it was more competitive, which ultimately led to a passionate players-only meeting among the defense on the week of the first Green Bay matchup, and that victory sparked the Lions to winning seven of their next nine games.

“When you look up and you see that you’re not helping the team, you’ve got to do something about it,” Glenn said. “And me as a coach, the players, they drew a line, they said enough was enough, and you really saw that during that New England game and after that.”

Demosky: The week after the loss to the Lions, the Packers limped back to Lambeau Field as 3.5-point underdogs to the Dallas Cowboys. Early in that game, Rodgers hit Watson for a 58-yard touchdown pass — a near carbon copy of the throw Watson dropped in the season opener at the Minnesota Vikings for what would’ve been a 75-yard touchdown on the first play of the game. Watson caught two more touchdowns against the Cowboys, and the Packers pulled out a 31-28 win in overtime.

Although the Packers lost their next two games — at home against the Tennessee Titans and at the Philadelphia Eagles — before they ran off four more wins in a row, the victory over the Cowboys made sure things didn’t get any worse.

“We’ve seen what we can be,” Watson said after the win over Dallas. “And we’ve seen it was only us getting in our own way.”

Stephen A. Smith praises the Green Bay Packers for stepping up when it counted heading into the postseason.

What is the No. 1 key to winning Sunday?

Detroit’s defense ranks among the bottom tier of the league in rushing yards allowed by opponents, with teams averaging 5.32 yards per rush against it. If the Lions want to beat the Packers, this has to improve. Over the past five weeks, the Packers have seven rushing touchdowns, which is tied for fourth most across the NFL. Lions defensive line coach Todd Wash admitted that improving the rush defense is a major point of emphasis entering this matchup, especially for rookies James Houston and Aidan Hutchinson, who have stepped up tremendously as of late.

“We’ve got to be able to really set edges,” Wash said during Wednesday’s practice. “[Glenn] says it all the time, but we want to see how fast they are. We want to see how tough they are, so we’ve really got to keep them between the tackles.”

The Packers have 12 of them during this four-game winning streak, including four in each of the past two games. They had 12 total during the first 12 games of the season.

They clinched the Week 16 win over the Dolphins with interceptions on Miami’s final three possessions. And against the Vikings, they returned an interception for a touchdown. That came shortly after Nixon’s kickoff return, giving them 14 points without an offensive score.

The Packers’ defense was highly touted early in the season and fell flat. Defensive coordinator Joe Barry was on the hot seat. But this streak has helped turn things around on that side of the ball and might have saved Barry’s job, barring a defensive collapse Sunday night.

What would making or missing the playoffs mean for the franchise?

Woodyard: Honestly, missing the playoffs wouldn’t be surprising to anyone. The Lions haven’t reached the playoffs since 2016 and possess the NFL’s longest playoff drought without a win, dating back to Jan. 5, 1992. So the expectations are low.

However, if they actually make the playoffs, that would be huge, especially for Campbell in his second season at the helm. This could change the “same old Lions” narrative attached to the franchise after years of agony — and potentially attract free agents to take the organization to another level in 2023.

Campbell isn’t sugarcoating the magnitude of this game to the team, either. He wants to see if his team is ready for this stage.

Demosky: At this point, just about anything could impact Rodgers’ decision about whether (or where) to play in 2023. Would Rodgers be more or less likely to walk away if the Packers don’t make the playoffs? He has made several references to players who have gone out on top and retired after winning a Super Bowl, so it’s worth wondering if that’s his dream scenario. Whatever Rodgers decides could also impact backup quarterback Jordan Love, the Packers’ 2020 first-round pick.

At the moment, missing the playoffs for a team that has been a regular participant in the postseason wouldn’t be considered a disaster. It would be the first time in Matt LaFleur’s four seasons as coach that the Packers did not qualify. But the long-term implications could be much more significant.

What are the teams saying?

“I think it means everything. I think it’s just so special. It’s as good as it can get. I mean, seriously, you get to go to Lambeau, historic Lambeau, where the top of this division has been Green Bay every year for years, and to go earn your right to potentially get in. … I just think this is as special as it gets. I mean, I just don’t think you’d want it any other way.” — coach Dan Campbell

“Yeah, it’s important. It’s huge. It’s where we want to be — playing the last game of the season and it means something — and we’ll see where we land after it all.” — QB Jared Goff

“It’s not the same old Lions. They were 1-6 at one point, and they’ve come all the way back to 8-8. There’ll be a lot on the line for both teams, and it’ll be exciting to line up against them.” — QB Aaron Rodgers.

“We control our destiny at this point. What better way to have it than against a division rival at home.” — TE Robert Tonyan.

“I do think the environment in Lambeau Field at night time is unlike any other place. So hopefully our fans show up and show out for us and support us. And don’t sell your tickets to the Lions fans, please.” — coach Matt LaFleur.