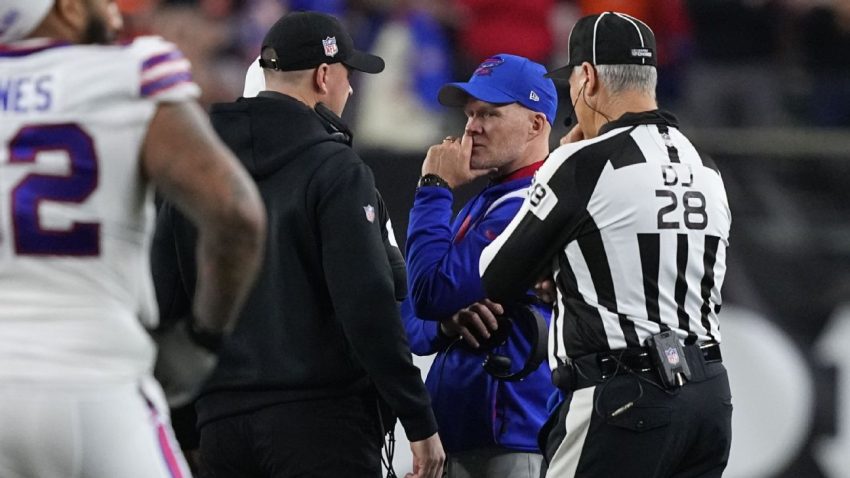 Buffalo Bills coach Sean McDermott held a singular thought when Damar Hamlin was driven off the field in an ambulance after a cardiac arrest, according to Cincinnati Bengals coach Zac Taylor.

In the first comments since Hamlin collapsed, Taylor disclosed his on-field conversation with McDermott on Monday night before the game between the two teams was suspended.

“When I got over there, the first thing he said was, ‘I need to be at the hospital for Damar, and I shouldn’t be coaching this game,'” Taylor recalled to reporters on Wednesday.

Hamlin, a second-year Buffalo player, remains in critical condition at the University of Cincinnati Medical Center after the cardiac arrest, the Bills said in a statement Wednesday. He has shown signs of improvement but is expected to remain under intensive care for further treatment and evaluation.

Taylor said that after Hamlin was placed in the ambulance and driven out of Cincinnati’s Paycor Stadium at 9:25 pm local time, referee Shawn Smith’s officiating crew walked over to Cincinnati’s sideline to say that McDermott was still trying to sort out what happened. To expedite the decision-making process, Taylor walked over to Buffalo’s sideline to join the officials and McDermott’s conversation.

Taylor praised the way McDermott and the Bills organization navigated the unprecedented situation.

“Seeing the way he handled his team just deepened that respect for him and verified everything I always thought he was about as a man,” Taylor said.

In a conference call with reporters Wednesday, Troy Vincent, league executive vice president of football operations, said all of his conversations with McDermott have centered on the well-being of Buffalo’s staff and players.

“My communications with the club and those players have just strictly been around making sure they’re OK, to check in,” Vincent said. “And being able to access those resources that are available to ’em. It is tough, and coach is still battling.”

Vincent and Taylor each referenced the minutes after Hamlin departed in an ambulance when it momentarily appeared the game might continue.

Taylor said there were never any directives for the game to resume. When Cincinnati’s players, including quarterback Joe Burrow, started to warm up and briefly took the field along with Buffalo’s defense, Taylor attributed it to the normal rhythms of a game’s resumption after a medical break. Taylor also added that at the moment, nobody was processing whether the game was going to be played or delayed.

“There’s so much that happened that I can’t really recall,” Taylor said. “My process of remembering is that’s really just what unfolded. There was no push for anything to happen.”

Vincent reiterated that version of events, which has been maintained since the hours after the game was suspended.

Conversations remain ongoing about whether the regular-season game between the Bills and the Bengals will be resumed at all. The focus has been on Hamlin with conversations about logistics just beginning, Vincent said.

Jeff Miller, the league’s executive vice president for communications, public affairs and policy, said a decision will be made in the coming days.

“But there’s a lot of considerations in place there and a lot of people that we want to consult with, including the clubs involved, before that decision is final,” Miller said.

Vincent added that they are allowing the Bills to guide the league’s decision on whether their game on Sunday, hosting the New England Patriots, will continue on as scheduled. “We’ll allow Sean [McDermott] and his team and his staff and the players, which are the most important thing here, to guide us if we have to make that decision collectively with the club and what’s best for Sean and his team and the players.”

Taylor said his team is preparing for its Week 18 game against the Baltimore Ravens. The league announced that that game will take place at 1 pm ET Sunday in Cincinnati. Taylor said the team has communicated to players the resources available to players trying to balance handling what happened to Hamlin amid the preparation for Sunday’s AFC North clash.

When asked about any long-lasting mental impacts about playing such a physical game, Taylor said he believes players know the risks that come with the game.

“This was a tough situation,” Taylor said. “My understanding based on the information we have is it’s a one in a very small chance of that happening. Players that play football know that.