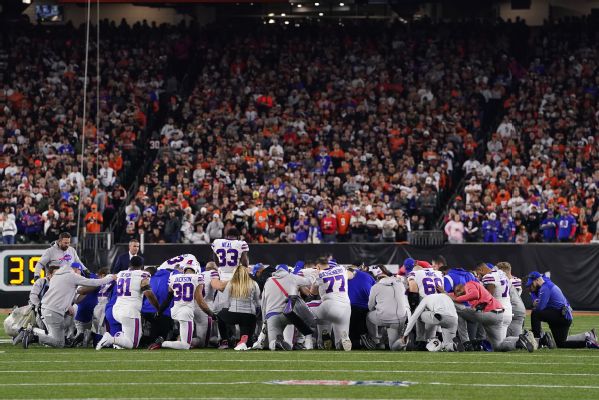 CINCINNATI — The Week 17 game between the Bengals and Bills will not be continued, the NFL announced on Thursday.

Monday’s game was suspended with less than six minutes left in the first quarter when Bill’s safety Damar Hamlin suffered a cardiac arrest after making a tackle. His heartbeat was restored on the field before he was transported to the University of Cincinnati Medical Center.

Doctors said Thursday that Hamlin has shown “substantial improvement,” including communicating through writing and moving his hands and feet, although he remains considered critically ill.

At the time of the stoppage, the Bengals were leading 7-3. NFL officials have maintained that there were no plans for the game to continue Monday following Hamlin’s collapse and transportation to the hospital.

Buffalo entered Week 17 tied with Kansas City for the best record in the AFC but held the head-to-head tiebreaker. Cincinnati trailed both teams by one game but would have held a three-way tiebreaker with a win over Buffalo. The Bengals beat the Chiefs in Week 13 in a rematch of last year’s AFC Championship Game.

On Wednesday, Bengals coach Zac Taylor said the team was preparing to face the Baltimore Ravens as the league mulled the future of the Bills-Bengals contest.

“We’ll let those decisions take place among those who want to make them,” Taylor said. “All that is really in front of us right now is to get ready for Baltimore on Sunday.”