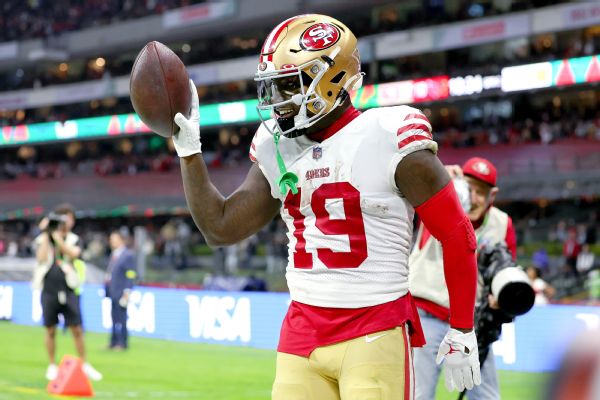 SANTA CLARA, Calif. — The San Francisco 49ers could have their full complement of playmakers for the regular-season finale with receiver Deebo Samuel and running back Elijah Mitchell set to return from injuries.

Coach Kyle Shanahan said Friday that Samuel will have no injury designation and is cleared to play Sunday against the Arizona Cardinals for the first time since being carted off with injuries to his knee and ankle in a Week 14 win over the Tampa Bay Buccaneers.

Shanahan said Mitchell will be officially activated off injured reserve on Saturday and return from a sprained left knee that sidelined him on Nov. 27.

Running back Christian McCaffrey also has no injury designation after missing practice Wednesday and Thursday with ankle and knee injuries.

That should provide a big boost to the 49ers (12-4) heading into the key game Sunday against the Cardinals. San Francisco can clinch the No. 2 seed with either a win or a loss by the Minnesota Vikings, and has a shot at the top seed and a bye with a win and a loss by the Philadelphia Eagles.

Samuel has 54 catches for 612 yards and two TDs, along with 228 yards rushing and three TD runs this season.

Samuel made a major impact in last year’s playoffs with 294 yards from scrimmage and two TDs to help the Niners reach the NFC title game.

He isn’t the only important offensive playmaker close to making a return for the Niners as they get ready for the playoffs.

Mitchell returned to practice Wednesday for the first time since going on injured reserve after spraining his left knee. Mitchell also sprained his right knee in the opener and has only played in four games this season.

San Francisco opened its practice window and is expected to use the last of its eight return from IR designations to get Mitchell back either this week or for the playoffs.

Mitchell led the 49ers in rushing as a rookie with 963 yards in 2021. He has 40 carries for 224 yards in four games this season. Mitchell has had two stints on injured reserve with knee injuries.

In other injury news, Shanahan said quarterback Jimmy Garoppolo has been able to put some weight on his left foot and could be available to return from his broken foot late in the playoffs if the Niners advance.