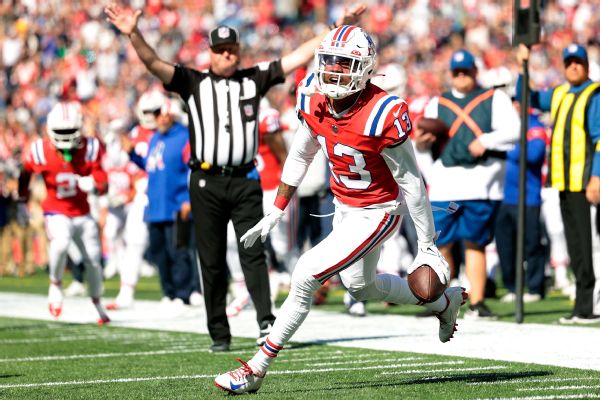 Both players had been on injured reserve — Bailey with a back injury, Jones with a knee injury — and the Patriots reverted their suspensions to Dec. 31. This puts two game checks in jeopardy for both players and could threaten Bailey’s guaranteed money from a lucrative four-year, $13.5 million extension he signed in August.

When a player is placed on the reserve/suspended list, it voids future guarantees, but a player can challenge that in arbitration.

Bailey, who was a first-team All-Pro in 2020, had been placed on injured reserve on Nov. 19. He was enduring a season in which he plummeted to the bottom of the NFL rankings with a 42.1 average and 35.3 net.

The Patriots officially designated Bailey to return from injured reserve Dec. 21, and he participated in parts of practices the next two weeks.

According to a source, the team suspension is due, in part, to differing viewpoints on whether Bailey was ready to return to game action.

As for Jones, he injured his knee on the opening series of the Patriots’ 27-13 win over the Arizona Cardinals on Dec. 12. In the locker room after the game, Jones told reporters he didn’t believe it was a serious injury, but the team eventually placed him on IR on Dec. 31.

Reporters saw Jones last Friday emptying belongings from his locker into a large bag, which seemed to indicate he was leaving the team instead of continuing with his rehabilitation.

A source said the suspension is related, in part, to Jones being fined by the team for missing rehabilitation appointments.

Jones’ agent, Jamal Tooson, said in a statement: “Jack is focused on recovering and getting back to help the Patriots as soon as possible. Regarding the suspension, it appears to be based on miscommunication regarding Jack’s rehab process. I’m hopeful we’ll reach an amicable resolution for both Jack and the Patriots.”

The Patriots selected Jones in the fourth round of the 2022 NFL draft, with director of player personnel Matt Groh acknowledging how much time he spent following his college career, which included an arrest that resulted in a misdemeanor count of commercial burglary.

Jones, 25, began his college career at USC in 2016 and 2017, was later declared academically ineligible, and went to Moorpark Junior College for the 2018 season before transferring to Arizona State. In 2020, he was suspended for fighting during an Arizona State practice.

The Patriots (8-8) visit the Buffalo Bills on Sunday.

If they win, they clinch a playoff berth. They will also qualify for the postseason with a loss if the Miami Dolphins lose to the New York Jets, the Pittsburgh Steelers lose to the Cleveland Browns and the Tennessee Titans lose to the Jacksonville Jaguars.