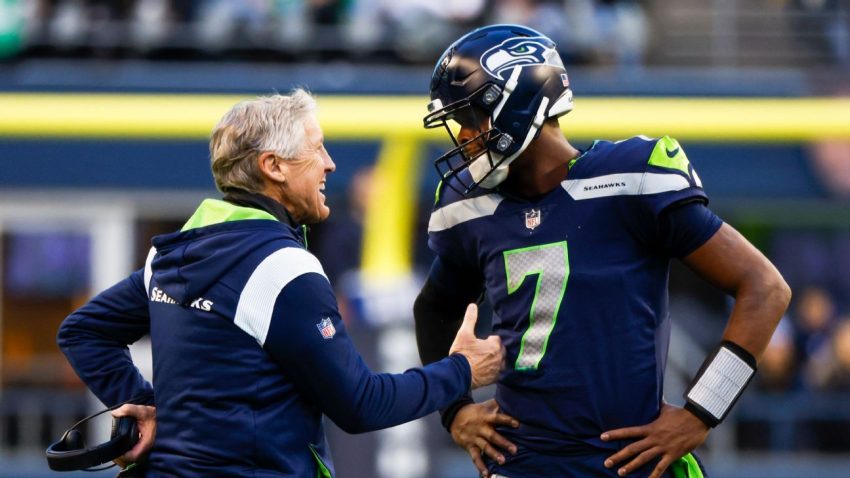 RENTON, Wash. — The Seattle Seahawks enter the offseason in an enviable position.

They’re loaded with high-end draft capital, including the fifth overall pick, and are among the league leaders in available salary cap space. They have plenty of resources to build on a strong core of young players who helped speed up their post-Russell Wilson/Bobby Wagner rebuild to earn an unexpected playoff berth as a 9-8 wild-card team.

But they also have a defense that needs some serious upgrades up front and don’t have a single quarterback under contract for 2023.

That’s why Pete Carroll’s end-of-season comments reflected more of his trademark optimism than usual, but also acknowledged all the work that he and general manager John Schneider have ahead of them over the next few months.

“I can’t come out of a season after we just [lost] our last game and feel better about the future than I do right now,” Carroll said on his Seattle Sports 710-AM radio show. “… I just think that we’re on a great track.”

Carroll likened the sense of immense optimism to what the Seahawks felt coming off the 2012 season, when they had a young, emerging team that went on to win the Super Bowl the following year. But those Seahawks had a quarterback on his cost-controlled rookie deal and a defense that was in the early stages of a historic run, neither of which they have now.

The first order of significant offseason business will be trying to get a deal done with Geno Smith before the start of free agency. Smith, whose one-year deal expires in March, showed the Seahawks that he’s worthy of a new contract and to remain their starter — and the massive raise that will come with it — even with the spate of turnovers that tainted the closing stretch of his breakout season.

An emotional Smith made it clear after the Seahawks’ playoff loss to the San Francisco 49ers that he wants to remain in Seattle, saying he wants to “repay” the organization for how it embraced him when others wouldn’t. Carroll made it clear that the Seahawks want to re-sign their Pro Bowl quarterback, although he stopped short on several occasions of declaring that Smith will be back, even though the team could assure that outcome by applying the franchise tag in the absence of a multi-year deal.

“We’ve got our guy, and we need to hopefully work things out so he’s with us,” Carroll said “… I couldn’t be more tickled by the way the whole thing turned out and how he handled it. And really as we look to the future, he’s a big part of why we’re looking to the future so promisingly.” 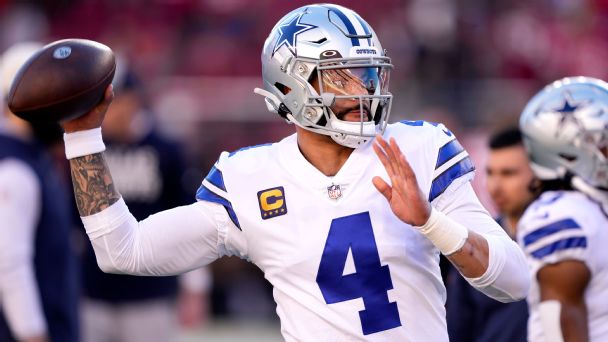 If the Seahawks can also re-sign backup quarterback Drew Lock, who’s also scheduled to be a free agent, to continue to develop behind Smith, it would lessen the need to draft a quarterback before the late rounds.

Seattle may have to use most of its early-round picks to bolster its front seven, which struggled mightily against the run and wasn’t great at pressuring quarterbacks, either. The Seahawks allowed over 150 rushing yards in nine games, including 181 to the 49ers in the wild-card round. They allowed over 200 rushing yards in losses to the New Orleans Saints, Carolina Panthers and Las Vegas Raiders, none of whom finished with more than seven wins.

Part of the problem on defense was the difficulty they had in adjusting from what was predominantly a 4-3 front to a 3-4. They also expanded their coverages on the back end, which worked well enough for the Seahawks to finish tied for seventh in sacks, despite ranking 28th in ESPN’s Pass Rush Win Rate.

Carroll is sticking with first-year defensive coordinator Clint Hurtt and with the 3-4, hoping to get the necessary improvement from the combination of scheme tweaks, growth from young players and offseason upgrades.

Their pass rush and run defense could also get a boost with the return of safety Jamal Adams, who went down in the opener with a torn quad tendon. But Adams has now missed 25 of a possible 50 regular-season games with Seattle, and Carroll revealed that his recovery from his latest injury will last into the summer. Linebacker Jordyn Brooks will also be coming off a torn ACL that he had surgically repaired last week, which puts his availability for the start of next season in jeopardy.

Even with those players at full strength, the Seahawks would need more firepower in their defensive line and linebacker corps. In acknowledging the talent gap that Seattle has to close with the 49ers — who outscored the Seahawks 89-43 in their three-game sweep this season — Carroll said the difference is in the front seven, mentioning Nick Bosa and Arik Armstead by name .

“Those guys are the real deal and they’ve other guys in their rotations as well,” he said. “Picture the really hot defenses around the league — there’s players on the front that make a difference and they distract you from everything else that’s going on. The Aaron Donald effect is so obvious at the Rams. He made everybody better because he was so hard to deal with. Well, Bosa is one of those kind of guys and Armstead is another one.

“… In years past, when we were really on it defensively, we had seven or eight guys that you had to deal with and some problem guys up front. We did it a little bit differently back then, but you’ve got to have issues that you cause for the opponent, so we [have] to get better.”

They have the resources to do it thanks in large part to the Wilson trade, which has already started to pay off. It brought back the 2022 first- and second-round picks that Seattle used last April on left tackle Charles Cross and outside linebacker Boye Mafe. They were part of a rookie class that yielded seven starters or regular contributors, including a pair of Rookie-of-the-Year candidates in running back Kenneth Walker III and cornerback Tariq Woolen. Based on combined snap counts, the Seahawks relied more on rookies than all but one team in 2022.

Access elite coverage for every fan: highlights of the biggest games, original series from NFL legends, unprecedented analysis and more. Sign up now to unlock everything ESPN+ has to offer.

The Wilson trade sets them up even better this year thanks to the Broncos’ disastrous season. In addition to the fifth overall pick and an early-second round pick from Denver, the Seahawks have their own picks in those rounds, including No. 20 overall. Of their 10 total selections, four are within the top 55.

According to ESPN Stats & Information, only 10 teams in the common draft era (since 1967) have picked in the top five after making the playoffs.

“For John, this is a dream opportunity here,” Carroll said. “He’s pumped about it.”

With the dead money from Wilson’s contract now off their books, the Seahawks had somewhere in the neighborhood of $35 million in available cap space before they signed kicker Jason Myers to an extension. They’ll likely create more via cuts and restructures, including a $6.5 million savings should they release right guard Gabe Jackson.

“Shoot, it’s bright,” safety Ryan Neal said of the Seahawks’ future. “If you can’t see it, then you must not have your eyes open. This team is going to be a really, really great team… That rookie class, smoking. Veteran pieces, great. We add a couple more pieces, get back together and get healthy, this team is something to be scared of.”

Schneider might be the NFL’s Executive of the Year after his master strokes from last offseason. He had the foresight and guts to move on from Wilson, negotiated one of the more lopsided trades in recent memory and then struck gold with Seattle’s draft class.

“This opportunity is so rare,” Carroll said on his radio show “… We’re always picking at the bottom of the [first round], 25th or 26th or somewhere down there, and it’s just a totally different experience. So we hope to really capture this. There’s opportunities galore. They’re all over the place, so we need to cash in on it.

“It’s a dream come true for Johnny to have this chance to do this. The fact that the cap is in good order as well as to support us through free agency and to give us our chances there, this is just one of those moments. We’ve got to capture it.”